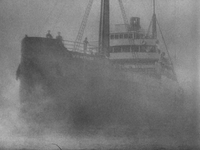 After assembling a film crew, Carl Denham hired Captain Englehorn and his ship the Venture to sail to the uncharted Skull Island to film his newest picture. During the voyage, Denham's leading lady Ann Darrow began to form a romantic relationship with the Venture's first mate, Jack Driscoll. When the Venture reached Skull Island, it anchored near the shore while the crew went onto the island to explore. After the crew encountered the local natives and learned they wanted to sacrifice Ann to their god, Kong, they returned to the Venture. That night, a group of natives used canoes to approach the ship and captured Ann while she was on deck, then brought her back to the island to sacrifice her to Kong. When the crew found a bracelet left behind by the natives, they pursued them back onto the island. Eventually, after Jack rescued Ann from Kong and lured the beast back to the village, Denham and his crew used gas bombs to knock Kong unconscious. They then used the Venture to transport Kong back to New York, where he intended to display him on Broadway.

Overwhelmed by lawsuits due to the destruction wrought by King Kong in New York, Carl Denham approached Captain Englehorn, who anticipated to receive similar lawsuits himself. Together, the two of them left New York on board the Venture once again and attempted to make money shipping cargo around the Pacific Ocean. After stopping at the Dutch port of Dakang, they met Nils Helstrom, a Norwegian captain who had sold Denham the map to Skull Island. Helstrom informed Denham of a hidden treasure on the island, and Denham, blinded by his financial situation, decided to return to the island and search for the treasure. Denham and Englehorn left for Skull Island on board the Venture, along with Hilda Petersen, a stowaway who worked in a sideshow in Dakang. On the way, a mutiny was staged on the Venture and Denham, Hilda, the cook Charlie and Englehorn were all set adrift.

The Venture was an old tramp steamer operated by Captain Englehorn, and was so rusted, and moored in such a dilapidated dock that a passerby might have thought it was abandoned, and surprised to discover it was a seaworthy vessel. [2] Englehorn and his crew had built a reputation for their live animal trapping, and their inclination not to ask questions. In 1933, the ship set sail for Skull Island. On arriving, it became caught in thick fog before getting trapped between rocks to all sides. The Captain and crew tried to maneuver out of them, but the ship hit a reef and a hole was torn in its hull, which the crew worked frantically to repair while scuttled.

This is a list of references for Venture. These citations are used to identify the reliable sources on which this article is based. These references appear inside articles in the form of superscript numbers, which look like this: [1]

↑ back to top ・ contents
Retrieved from "http://wikizilla.org/w/index.php?title=Venture&oldid=128495"
Categories: