The Balashevo (バラシェーボ号,   Barashēbogō, Russian: Балашево) is a fictional Soviet freighter and covert naval vessel that appeared in The Return of Godzilla. It secretly contained the controls for the Soviets' nuclear attack satellite, which was poised to launch a nuclear warhead at Godzilla should he come ashore in Tokyo.

Balashevo, a covert naval ship disguised as a freighter, contained onboard controls for a nuclear missile satellite. While Godzilla was being attacked by the JSDF in Tokyo Bay, he submerged himself into the water. The resulting wake forced the Balashevo into the harbor where it ran aground and partially capsized, disrupting some of its systems, the most crucial of which were the controls of the armed satellite. This triggered a countdown to fire the nuclear missile at Tokyo. The captain, who under government orders had earlier disabled the firing system, attempted to shut down the launch sequence. After squeezing through the broken doorway, the captain was killed in a small explosion before being able to stop the countdown. Eventually, the nuclear missile was fired at Tokyo as a result. 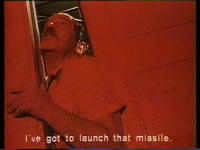 Kashirin exclaims his intentions to launch the missile in the American version of The Return of Godzilla.


↑ back to top ・ contents
Retrieved from "https://wikizilla.org/w/index.php?title=Balashevo&oldid=181199"
Categories: