When the Millennian UFO first appeared, it looked like a massive rock due to having its exterior being covered by rocks and sand during its millions of years being dormant. After it shed off this rock, it looked like a vaguely bullet-like pod, with a white undercarriage and blue fuselage.

The Millennian UFO first crash landed on Earth millions of years ago, forcing its crew to convert themselves into antimatter. The ship flew into the oceans, and remained there for millions of years. In 2000, the ship was retrieved from the South Pacific by an expedition crew. It then escaped, and begun to fly around Japan. After flying out to sea, the ship reappeared as Godzilla was attacking the Tokai Nuclear Power Plant, blasting the kaiju into the ocean through the use of its laser cannon, unwittingly giving the JSDF an unexpected victory over Godzilla. The Japanese Government tried to destroy the ship, which looked like a large rock, but this only revealed its true appearance. It seemed that every method the Japanese Government tried to use that could slow the ship down was always foiled by the rising sun. The ship traveled to Shinjuku. It extracted data from computers in the city, and remained there until Godzilla came to confront it. Godzilla tried blasting the ship, but to no avail, and the ship fought back using its Laser Cannons and Shockwaves to hold the beast off. Eventually, the crew inside commanded the ship to topple a building on to Godzilla, and retrieve a sample of his Genetic Material. Once this was done, the ship landed, and a Millennian emerged, having regained its natural form. However, the presence of Organizer G in Godzilla's blood made the alien mutate into Orga. During Orga's fight with Godzilla, the alien Mutant commanded his ship to attack Godzilla by surprise. Despite shooting and injuring Godzilla several times, the ship was badly damaged by hitting several buildings and Godzilla, and was then taken down by Godzilla's atomic breath. 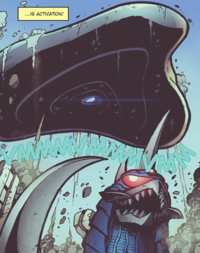 Gigan with the Millennian UFO in Godzilla: Rulers of Earth #6.

In Godzilla: Rulers of Earth #6, the Cryogs sent Gigan to Area 51 to retrieve the Millennian UFO. After the UFO was freed, it accompanied Gigan to Las Vegas and began to terrorize the city until Godzilla and MOGUERA arrived. During the battle, Gigan restrained Godzilla and allowed the UFO to absorb his genetic material and release Orga.

This is a list of references for Millennian UFO. These citations are used to identify the reliable sources on which this article is based. These references appear inside articles in the form of superscript numbers, which look like this: [1]

6 months ago
Score 0
Imagine some random Toho vehicles combine to become a giant bicycle that will fight Godzilla and the seat is the Millenian UFO.
Permalink
You are ignoring the author of this comment
Show comment | Manage ignore list

38 months ago
Score 1
the film arrival has alien ships that are bearing a resemblence rto these.
Permalink
↑ back to top ・ contents
Retrieved from "http://wikizilla.org/w/index.php?title=Millennian_UFO&oldid=139862"
Categories: