The Kilaak UFO (キラアク星円盤,   Kiraaku-Boshi Enban, lit. Kilaak Star Disk), known as the Fire Dragon (火竜,   Hiryū) when it was encased in fire, is a spaceship used by the Kilaaks that first appeared in the 1968 Toho film, Destroy All Monsters.

After Godzilla and the other monsters defeated King Ghidorah, a Kilaak UFO, identified as a kaiju called the "Fire Dragon," emerged from the Kilaak base. The ship caught Rodan on fire and flew around, destroying a building as well as several J.A.S.D.F. jets. However, Godzilla was able to find their base and so ripped into it, dropping the base's temperature and having the Kilaaks be forced into hibernation. Shortly afterwards, the SY-3 found and took down the last one of the Kilaaks' spacecraft. 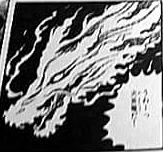 The Fire Dragon in the Destroy All Monsters manga

The 1968 manga adaptation of Destroy All Monsters features a Fire Dragon that is more true to its title, assuming the full-fledged appearance of a dragon made of flames, despite still being revealed as a Kilaak UFO in the end.

20 months ago
Score 0
I hate this thing. It was a lazy attempt to try and get more action into the film that just ends up being boring and it's only there to pad the runtime of the film.
Permalink
You are ignoring the author of this comment
Show comment | Manage ignore list

35 months ago
Score 0
In my opinion, the fire Manda in the NES game is more likely to be this thing, I really doubt it is really Manda.
Permalink
↑ back to top ・ contents
Retrieved from "http://wikizilla.org/w/index.php?title=Kilaak_UFO&oldid=164979"
Categories: