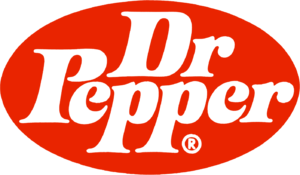 Dr Pepper is a soft drink marketed as having a unique flavor. Created in the 1880's by Charles Alderton of Waco, Texas, and first served around 1885, Dr Pepper was first nationally marketed in the United States in 1904 and is now also sold in Europe, Asia and South America.

A $10 million advertisement campaign in 1985 saw Godzilla featured in two commercials for Dr Pepper, while the drink was also featured in the U.S. version of The Return of Godzilla, Godzilla 1985.[1] Dr Pepper also sponsored a little-seen tie-in music video of the song "I Was Afraid to Love You" for Godzilla 1985.

Shot in black and white, this commercial shows a cast of Japanese and American citizens watch Godzilla destroying a city. He tries drinking from a tanker truck, but doesn't like the flavor, and incinerates a train car full of lemonade. He then finds a giant can of Dr Pepper on the roof of a nearby building. After drinking it, he is finally appeased.

A female monster named Newzilla begins rampaging through a city. Godzilla picks up a nearby tree, and offers it to her as a bouquet of flower, with Tchaikovsky's Romeo and Juliet song playing in the background. Newzilla swats the tree out of Godzilla's hands in rejection. Godzilla then finds a giant can of Diet Dr Pepper on a billboard and offers her the beverage, finally appeasing her.

This is a list of references for Dr Pepper. These citations are used to identify the reliable sources on which this article is based. These references appear inside articles in the form of superscript numbers, which look like this: [1]