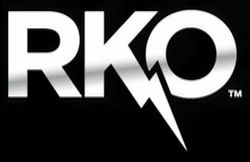 RKO Pictures LLC, formerly known as RKO Radio Pictures Inc., is an American film production company. In the past, it was one of the biggest and most powerful Hollywood studios. RKO produced the original King Kong in 1933, and distributed The Mysterians in the United States in 1959.

RKO Pictures was founded in 1928 when the Keith-Albee-Orpheum (KAO) theater chains and Joseph P. Kennedy's Film Booking Offices of America (FBO) studio merged under Radio Corporation of America (RCA). The company was very successful throughout the first half of the 20th century, producing such iconic films as Citizen Kane and King Kong. In 1948, Howard Hughes purchased RKO Pictures, and the company began a steady decline. RKO ceased production in 1957 and closed its doors in 1959.

Despite no longer producing films, RKO continued to own the rights to King Kong, and in 1962 licensed the rights to Kong to Toho, who produced King Kong vs. Godzilla and later King Kong Escapes. In the 1970s, RKO sold the film rights to King Kong to Paramount Pictures, causing Universal Pictures, who previously held King Kong's film rights in the United States, to sue RKO. In 1976, a federal judge found that RKO did not own the rights to the character King Kong, only the 1933 film and its sequel, and that the character's rights rightfully belonged to the estate of Merian C. Cooper, Kong's original creator. The rights reverted to Cooper's son, Richard, who promptly sold them to Universal.

RKO began operating as a production subsidiary in 1981, and it and all of its remaining assets were sold to new owners in 1989. RKO continues operating as a small independent film company under these owners to this day.

16 months ago
Score 0
Gone, but not forgotten. And their legacy lives on.
Permalink
↑ back to top ・ contents
Retrieved from "http://wikizilla.org/w/index.php?title=RKO_Pictures&oldid=127454"
Categories: