For the alien race, see Mysterians.

The Mysterians (地球防衛軍,   Chikyū Bōeigun, lit. Earth Defense Force) is a 1957 tokusatsu kaiju film produced by Toho. It was released to Japanese theaters on December 28, 1957 and to American theaters on May 15, 1959.

A forest fire suddenly consumes a village near Mount Fuji, followed by a violent landslide that completely wipes out a second village. Authorities investigating the incidents are suddenly attacked by a huge robot, which makes its way to another village where the JSDF finally stops it. The robot is revealed to be of extraterrestrial origin, just as a huge dome surfaces from the ground near Fuji. The occupants of the dome, calling themselves Mysterians, claim to come in peace and only desire a small tract of land and the ability to marry Earth women. However, humanity sees through the Mysterians' seemingly innocuous requests and realizes they are mobilizing a war machine capable of wiping out human civilization so they can conquer the Earth. All of the planet's militaries combine their efforts into the Earth Defense Force and begin a desperate war against the Mysterians. But can even the most advanced weapons of mankind stand up to the Mysterians' incredible technology?

The astrophysicist Ryoichi Shiraishi is acting peculiarly. He has called off his engagement to Hiroko Iwamoto and moved to a small village near Mount Fuji, estranging himself from his friends and colleagues. Prior to his seclusion, Shiraishi had been working on a series of fantastic reports for his mentor, Dr. Adachi, on a former planet he calls Mysteroid. According to this theory, the asteroid belt beyond Mars was once a singular planet. Adachi notes that the latest report surprisingly is incomplete at the time of its submission. Mystery follows Shiraishi to his new home: one summer night, a forest near the town erupts in a brilliant blaze in which the source of the radioactive flames is underground. Within days of this event, tragedy again strikes the village as a sudden and violent landslide annihilates the small town and seemingly all of its residents, including Ryoichi.

Joji Atsumi, a fellow scientist, joins the official investigation. Atsumi and several policemen are investigating radiation levels in the vicinity of the former village when a giant monster emerges from the side of a hill. The survivors of the attack retreat to alert the authorities, but by nightfall the monster has already reached the nearby city. The Defense Force is summoned to help evacuate the populace and defeat the kaiju. During this evacuation, Atsumi and Etsuko –his lover, and Ryoichi's sister– observe what appear to be flying saucers in the night sky, although the advance of the monster gives them little time to process this. Despite the creature's incredible destructive force, it's killed in the JSDF's destruction of the Koyama Bridge.

An analysis of the creature's remains determines it to be a robot, although the presence of unknown elements suggests its origin is extraterrestrial. After reevaluating the Mysteroid report, Adachi's observatory sights alien activity near the moon, and after hearing Atsumi's testimony about the saucers over Fuji, the doctor publicly announces the findings. A team of scientists, including Atsumi and Adachi, investigate the region highlighted in Shiraishi's report. A large artificial dome rises from the ground and an alien voice greets and requests the presence of the scientific party. Inside the Dome, the aliens introduce themselves as Mysterians, the last survivors of the planet Mysteroid, annihilated in an atomic war hundreds of thousands of years ago. Fearing retaliation would lead to another nuclear war on Earth between man and Mysterians, they launched their robot, Moguera, to demonstrate that man's technology was no match for their own. They request to immigrate to Earth and occupy the three kilometers surrounding their dome. Furthermore, the fallout from their wars has poisoned their bodies, resulting in 80% born with severe abnormalities. In the hopes of continuing their race, the leader also appeals for the right to intermarry with human women. Five have already been chosen, he says, and Etsuko and Hiroko are among them.

The Ministry of Defense officially declines these requests, citing the Mysterians' hostile acts, and prepares countermeasures against the Dome. Police protection is arranged for Etsuko and Hiroko, and during a visit with Atsumi, the three are contacted by Ryoichi over the television. He declares that he had joined the Mysterians prior to his disappearance to study their sciences, and he asks Atsumi to have the impending attack cancelled, suggesting it will only lead to useless bloodshed. The attack ultimately proceeds on schedule, however, and the JSDF forces are predictably eliminated by the alien invaders.

The Japanese government requests foreign aid and the United Nations is called to session to establish an international coalition against the threat. An electron gun is developed and equipped to the airships Alpha and Beta for a test. Although the weapon proves successful in combat, the Dome's heat ray results in the destruction of the Beta. In retaliation to this attack, the Mysterians announce the occupation of a 120-kilometer radius, and privately, the alien leader tells Ryoichi that they will soon be capable of controlling all of Japan. The United States introduces a new technology, dubbed the Markalite F.A.H.P., which has the ability to reflect the Mysterian heat ray to its source. A decisive assault is planned using the new weapon in concert with the Alpha.

Etsuko and Hiroko are kidnapped on the eve of battle and taken to the Dome. Incapable of convincing Dr. Adachi to stall the offensive to mount a rescue effort, Atsumi, having previously found an obscured underground tunnel to the Dome, descends into the alien base. The Alpha, shielded by the new technology, distracts the Mysterians while the Markalite Cannons are dropped via rocket into the battlefield. With the heat ray's destructive effects now mostly neutralized, the tide of the war turns in favor of humanity. In a final effort, the Mysterians induce a tidal wave to destroy one Markalite, while a second Moguera is sacrificed to destroy another cannon from below. Meanwhile, Atsumi is captured and silently led back to the cave where the earth women are waiting. His captor reveals himself to be Ryoichi Shiraishi. Finding himself in disagreement with the Mysterians' plans for conquest, he allows his friends to escape with his final report while he heroically returns to the Dome to sabotage the invaders' efforts from inside.

Now facing certain defeat, the Mysterian leader orders a retreat to their orbiting space station. The Dome explodes, ending the alien occupation. The Alpha pursues the escaping saucers, destroying three, but the U.N. forces allow the rest to disappear into the cosmos. Dr. Adachi notes that humanity must not repeat the Mysterians' mistakes. The groundwork has been laid for a united world: now its nations must continue working together to achieve lasting peace.

A November 1, 1957 report states that Southeast Asian distribution rights to The Mysterians were sold to Shaw & Sons of Hong Kong for the highest amount paid for a Japanese film of that time. Rights to other parts of the world were sold for a record price for a Japanese film to Topaz Film Corporation in February of 1958. 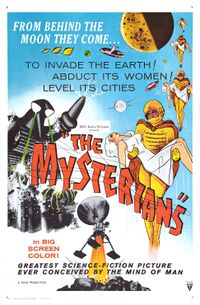 The Mysterians was prepared for American theatrical release by RKO Radio Pictures.[2] The English-dubbed version was recorded in New York under the supervision of Peter Riethof and Carlos Montalbán. Notably, it was the first Toho science fiction film to receive an English version without extensive re-editing. Only small edits were undertaken, and the English dialogue remains faithful to the Japanese script.[3]

By 1959, however, RKO's studio had closed and all yet-unreleased films were sold off to Hollywood's other studios. Thus, the American version of The Mysterians was released theatrically in the United States by Metro-Goldwyn-Mayer in May of 1959[2], advertised as "The greatest science-fiction picture ever conceived by the mind of man." RKO's version was subsequently distributed in European territories by the J. Arthur Rank Organisation.

The American version of The Mysterians was twice released on VHS in the United States, by VCI Home Video in 1983[4] and by Star Classics in 1989.[5] On January 25, 2005, Tokyo Shock released the full Japanese version of The Mysterians along with a new English dub by Bang Zoom! Entertainment on DVD in the U.S.[6] This release also included various special features ported from Toho's region 2 DVD, including an audio commentary by Koichi Kawakita and Shinji Higuchi.[7]

In the United States, despite its successful theatrical run, The Mysterians was reviled by critics. The New York Times criticized the film as a generic alien invasion film with "runny color" and poor acting.

Nevertheless, The Mysterians proved to be an influential and important entry in Toho's library of science-fiction films, inspiring several more alien invasion and space-related films from director Ishiro Honda, including a sequel, Battle in Outer Space, and Gorath. Koichi Kawakita, later known as the special effects director for the Heisei Godzilla series and the Rebirth of Mothra trilogy, said he was thrilled when he saw this film while in junior high and it inspired him to work in special effects. Fans of the tokusatsu genre often praise the film for its special effects, the introduction of the monster Moguera, and its score from Akira Ifukube.

Toho produced a sequel to The Mysterians, Battle in Outer Space, two years later in 1959. The film is set in 1965 and features some returning characters from The Mysterians, most of whom are played by different actors. This film features a new invading alien race, the Natarls, who engage in a war with humanity in outer space. Another sequel was planned, but was changed into a standalone film called The War in Space.

This is a list of references for The Mysterians. These citations are used to identify the reliable sources on which this article is based. These references appear inside articles in the form of superscript numbers, which look like this: [1]

22 months ago
Score 1
Bit rich coming from a user who tries adding plagiarised content to pages and passing it off as their own.
Permalink
You are ignoring the author of this comment
Show comment | Manage ignore list

22 months ago
Score 0
Well I'm sorry to not include the notice to the edit I made, since there is a notice template regarding these things.
Permalink
You are ignoring the author of this comment
Show comment | Manage ignore list

22 months ago
Score 3
Don't add plagiarised content at all.
Permalink
↑ back to top ・ contents
Retrieved from "http://wikizilla.org/w/index.php?title=The_Mysterians&oldid=169724"
Categories: