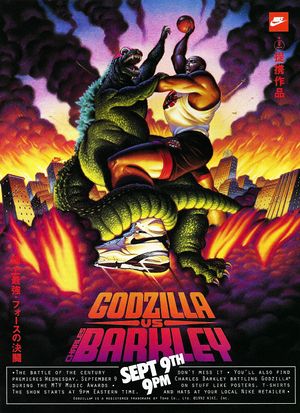 Godzilla emits a blast of atomic breath as he storms through Tokyo. He turns around as he sees Barkley approach him, dribbling a basketball. The monster puts on a pair of pink goggles and darts his tail out, knocking the ball from Barkley's hands. Barkley catches it and charges forward, elbowing Godzilla aside as he dunks it into the fallen "O" from a Tokyo sign. They walk out of the city as friends, with Barkley telling Godzilla that "the Lakers are looking for a big man."

In December 1993, Dark Horse Comics released a one-shot comic inspired by the commercial, in which a magic coin allows Charles Barkley to grow to Godzilla's size and defend California. The comic was written by Mike Barron with art by Jeff Butler and Keith Aiken.

This is a list of references for Godzilla vs. Charles Barkley. These citations are used to identify the reliable sources on which this article is based. These references appear inside articles in the form of superscript numbers, which look like this: [1]

24 months ago
Score 0
This page should have a section about the Godzilla suit like the Dr. Pepper and Snickers articles have.
Permalink
You are ignoring the author of this comment
Show comment | Manage ignore list

24 months ago
Score 0
It did, but it was removed because it is ugly.
Permalink
You are ignoring the author of this comment
Show comment | Manage ignore list

37 months ago
Score 0
The greatest Godzilla comic book of all time. Like Batman and Robin, it's so disconnected from any form of reality that I'm convinced aliens wrote it.
Permalink
You are ignoring the author of this comment
Show comment | Manage ignore list

26 months ago
Score 0
I hate to say, but this is gotta be ONE OF THE WORST EVER!!!!!
Permalink
You are ignoring the author of this comment
Show comment | Manage ignore list

26 months ago
Score 0
What? How is it one of the worst? This comic is awesome! It doesn't take itself seriously at all, which is perfect, and is wonderful in how bizarre it is.
Permalink
↑ back to top ・ contents
Retrieved from "http://wikizilla.org/w/index.php?title=Godzilla_vs._Charles_Barkley&oldid=126468"
Category: