The Last Dinosaur (極底探険船ポーラーボーラ,   Kyokutei Tanken-sen Pōrā Bōra, lit. Sub-Polar Exploration Ship Polar-Borer) is a 1977 tokusatsu kaiju film co-produced by Rankin/Bass Productions and Tsuburaya Productions and distributed by Toho. The film first aired on ABC on February 11, 1977 in the United States, while it was later released theatrically in Japan in October of that year.

During an underwater oil drilling expedition, Thrust Industries' advanced submersible drilling vehicle the Polar-Borer accidentally burrows into a gigantic underground cavern. The vessel's crew ventures out to explore, with one member, Chuck Wade, remaining behind in the Polar-Borer. However, the crew soon find themselves attacked in the jungle by a colossal predator, a Tyrannosaurus rex. Wade manages to escape in the Polar-Borer, with all of his crew mates killed by the dinosaur. When Thrust Industries' CEO, multibillionaire Masten Thrust Jr., learns of the event, he orders a second Polar-Borer expedition to the strange underground world to investigate the presence of a prehistoric creature there, one on which he will be part of the crew. While as far as the public is concerned the expedition is for scientific purposes and grant closure for the crew members lost previously, Thrust - an accomplished big game hunter who had not faced a challenging hunt in years - intends to hunt the Tyrannosaurus himself and claim it as the ultimate trophy. Accompanying Thrust on the expedition are Wade, Japanese scientist Dr. Kawamoto, and an African tracker named Bunta. Francesca Banks, a journalist, convinces Thrust to bring her along on the expedition after seducing him.

The Polar-Borer is launched from Thrust Industries' oil platform Mother 1, and successfully bores through the polar ice and ocean floor until it surfaces in a lake within a jungle-covered underground cavern. Thrust, Wade, Bunta, and Francesca disembark to investigate, while Kawamoto remains behind to watch over their base camp. While exploring the jungle, they narrowly avoid being trampled by a stampeding ceratopsian. They later come upon a pond, where they find gigantic leeches as well as a rock which they later discover is a giant turtle. Meanwhile, the Tyrannosaurus that killed the crew of the last Polar-Borer discovers the expedition's base camp, killing Dr. Kawamoto and trashing the camp before making off with the Polar-Borer. The beast deposits its new prize in its lair, littered with the bones of other prey. Suddenly, a Triceratops erupts from underground and charges at the Tyrannosaurus, goring it with its sharp horns. Despite sustaining injuries, the Tyrannosaurus kills its foe by biting down on its neck with its razor-sharp teeth, causing the Triceratops to bleed to death.

Thrust and the others soon find themselves stranded in the underground world, their every move stalked by both the Tyrannosaurus and a tribe of primitive humans. They are forced to camp in a cave and survive using the weapons they salvaged and hunting the local wildlife. Additionally, Francesca and Wade begin developing feelings for each other. When a large party of primitive men corner the trio, Thrust and Wade manage to kill some of them with their rifles, convincing the others to stay far away from them from now on. However, a primitive woman takes an interest in the group, particularly Thrust, and follows them to their camp. Thrust is furious when the primitive woman tries to sleep with him and wants her thrown out of the camp, but Francesca decides to let her stay, naming her Hazel. One day as Hazel and Francesca are getting water from a lake, they are attacked by the Tyrannosaurus. They narrowly manage to avoid its attack, convincing Thrust that they need to kill it. Thrust and Bunta begin preparing an elaborate trap for the Tyrannosaurus, when Wade discovers the Polar-Borer in the monster's lair. He and Francesca try to convince Thrust to abandon his hunt and help them salvage the Polar-Borer, but find that Thrust's obsession has consumed him and that he wants nothing more than to kill the Tyrannosaurus himself. Wade and Francesca abandon Thrust to his hunt and manage to retrieve the Polar-Borer from the Tyrannosaurus' lair using a pulley system, before finally pushing it back into the lake where it originally emerged. Wade begins repairs to allow the craft to escape, but Francesca goes back to try and convince Thrust to come with them.

As Wade nearly completes repairs on the Polar-Borer, the Tyrannosaurus finds and kills Bunta and prepares to do the same to Thrust and Francesca. Thrust is able to spring his trap, which catapults a gigantic boulder into the Tyrannosaurus' head. While at first it seems to have been effective in bringing the beast down, the Tyrannosaurus soon gets back to its feet and destroys the catapult before escaping. Francesca begs Thrust to leave with her and Wade, but he continues to refuse to go home empty-handed. Francesca pleads with him to leave the Tyrannosaurus alone, since it's "the last dinosaur," but Thrust simply replies that so is he. Thrust sees Francesca and Wade off as the Polar-Borer submerges and returns to the surface world. As Thrust hears the Tyrannosaurus' roar echo through the jungle, he prepares to continue his hunt, and is surprised when Hazel approaches him. Rather than shoo her off like before, Thrust finally decides to let Hazel join him, and the two set off into the jungle together. 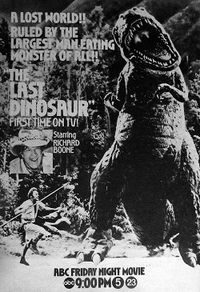 The Last Dinosaur was scheduled for theatrical releases in both Japan and the United States, however it was decided at the last moment to release the film straight to television in the U.S. The film was aired on television by ABC, and had 11 minutes cut from its run time, while it was later released uncut theatrically in Japan by Toho. Warner Bros. finally released the uncut English version of the film in 2011 on DVD.

This is a list of references for The Last Dinosaur. These citations are used to identify the reliable sources on which this article is based. These references appear inside articles in the form of superscript numbers, which look like this: [1]

20 days ago
Score 0
Has anyone not notice that the T Rex in the film, may be brain damaged after being hit in the head by a boulder and some how being swung around by a trap the people made, i bet the T rex thought it could be like the triceratops but suffocated in the wall, still dont know how the triceratops got in there though . . .
Permalink
You are ignoring the author of this comment
Show comment | Manage ignore list

26 days ago
Score 0
the minor monsters in this movie are Pteranodon, Ceratopsian (Uintatherium), Large Lake Turtle, Giant Leeches, Boneyard, and Giant Fish.
Permalink
You are ignoring the author of this comment
Show comment | Manage ignore list

My Thoughts: The Ladt Dinosaur

Oh, how I love this movie. One of my favorite "cheesy" dino flicks. I used to watch this one back-to-back with "Planet of Dinosaurs" when I was a kid.

The effects and costumes are... well, bad, but I've seen worse. I like how the T. rex randomly shifts size; one moment it's normal sized, and the next it's nearly kaiju-sized. And let's not forget the triceratops that just appears out of the side of a cliff. No explanation, or hint to how it wound up buried there, just RANDOM TRICERATOPS ATTACK!!!!

The acting, however, is of opposite quality. The human characters are surprisingly likable and defined. I especially liked Richard Boone's character.

A lot of people would classify this movie as "so bad it's good." I watched this movie once a long time ago when I was little, and recently went into watching it again expecting it to be so bad it's good. To my surprise, it was actually a pretty competently made film with some solid acting, especially from the great Richard Boone, and enjoyable special effects. The Tyrannosaurus rex in particular has become one of my favorite kaiju, as despite its clumsy suit it manages to exude quite a bit of personality and menace. The story, despite its obvious B-movie premise, is handled pretty well too.

I'd say The Last Dinosaur isn't "so bad it's good." I say if it's your kind of film, then it's just plain good. It's entertaining and well-done in many respects, and some of the cheesier aspects of the production serve only to make it more fun and endearing. I'll give it a 5 out of 5, just because I was greatly impressed by its quality given my expectations.
Permalink
You are ignoring the author of this comment
Show comment | Manage ignore list

42 months ago
Score 0
I finally ordered this movie on Amazon, so I will be able to watch it again for the first time since I was really little and actually start making pages for all the things that appear in it soon.
Permalink
↑ back to top ・ contents
Retrieved from "http://wikizilla.org/w/index.php?title=The_Last_Dinosaur&oldid=166965"
Categories: