Tyrannosaurus rex (ティラノサウルス·レックス,   Tiranosaurusu rekkusu) is an extinct species of large carnivorous dinosaur from the Late Cretaceous period, and one of the most famous dinosaurs ever.

A Tyrannosaurus rex famously appeared in the 1933 film King Kong. Another was featured as the main antagonist of the 1977 film The Last Dinosaur, and a T-Rex also appeared in the film Rebirth of Mothra III in 1998.

The Tyrannosaurus rex in King Kong (1933)

A Tyrannosaurus was among the prehistoric creatures living on Skull Island in 1933. As King Kong was traveling across Skull Island with his 'bride', Ann Darrow, he realized that the crew of the Venture were following him, and so he set Ann down atop a tree while he went to attack the expedition. While Kong was distracted by this, the Tyrannosaurus rex appeared from the jungle and began to menace Ann, intent on eating her. After hearing Ann's screams, Kong rushed to her aid and began fighting the T-Rex. After a long and drawn-out battle, Kong snapped the Tyrannosaurus' jaws, incapacitating it, before continuing on his way with Ann. A short time later, Jack Driscoll encountered the Tyrannosaurus, still breathing but barely alive. As he watched, the dinosaur finally died. 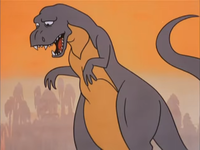 A Tyrannosaurus rex in The King Kong Show 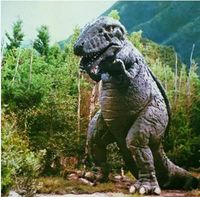 The Tyrannosaurus rex in The Last Dinosaur 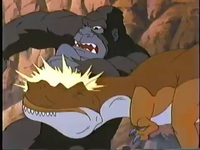 The Tyrannosaurus in The Mighty Kong

After the giant ape, the Mighty Kong retreats away from the village with Ann Darrow the enormous primate pauses for a moment to inspect her after she briefly passed out. While tending to her, a Tyrannosaurus rex ambushes the ape and charges it. The two have a brief battle in which the dinosaurs headbutts the ape before toppling it with a tail smack. Trying to bite the Mighty Kong in the face, the theropod was thrown off and the two squared off once more. After the Tyrannosaurus charged its rival again, Kong ended the duel by landing a powerful blow to its head that knocked it out. The ape then recollected Ann before leaving. 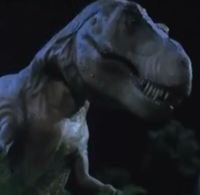 The Tyrannosaurus rex in Rebirth of Mothra III

As Rainbow Mothra arrived in the Late Cretaceous period, a Tyrannosaurus rex pursued a herd of Triceratops nearby. As it bit into a straggler's neck, Cretaceous King Ghidorah seized it in his central head. Before it could be devoured, Rainbow Mothra made his presence known with a volley of Cross Heat Rainbow Lasers, causing the space monster to drop the screaming dinosaur.

After Rainbow Mothra severed part of Cretaceous King Ghidorah's tail with another Cross Heat Rainbow Laser, a Triceratops and a Tyrannosaurus observed the appendage as it burrowed underground and stared at each other in concern. 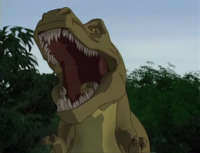 A Tyrannosaurus rex in Kong: Return to the Jungle

A population of Tyrannosaurus rex lived on Kong Island. They were naturally aggressive and would often attack the Island Guardian Kong if he came too close.

A Tyrannosaurus rex Biono-bot in Kong: King of the Apes

Dr. Richard Remy created an army of Biono-bots in the form of several dinosaurs, including the Tyrannosaurus. While Remy used the Biono-bots in his attempts to establish a new world order united under his control, real Tyrannosaurus rexes lived on in the center of the earth.

Terror from Beyond Beyond

A Tyrannosaurus rex in Terror from Beyond Beyond

A Tyrannosaurus rex will appear in Terror from Beyond Beyond.

After hopping out of the jungle, the meat-eater saw Ann Darrow in a tree while King Kong was distracted by shaking the crew of the S.S. Wanderer off of a log bridging a chasm. After Ann screamed in terror, Kong threw the log into the pit and sprang on the meat-eater. The dinosaur quickly kicked Kong off with its incredible hind leg strength, but Kong was able to circumvent this by injuring one of its legs. Kong then easily overpowered the meat-eater and pried open its jaws, leaving them broken, and the creature dead.

The meat eater lurked in the darkness of the jungle as Kong busied himself with warding away the Wanderer crewmen. It moved out to attack the unattended Ann Darrow, but after she screamed at its appearance, Kong returned and attacked. The ape pummeled the meat eater's hip until it fell forward and broke its leg with a sickening snap. It then rolled over onto its back and flailed its remaining leg is defiance before Kong leaped upon the meat eater and broke its jaws before snapping its neck and leaving it to its death throes before manipulating the jaws and beating the corpse with his fists and letting out a mighty roar as he beat his chest.

After Gaw and her vicious pack of Deathrunners slaughtered a mother and father kong and left their adolescent son for dead, a meat eater and its offspring scavenging for food came upon the carcass of the father kong and began to eat it. Mistaking the meat eater as being responsible for killing his parents, the young kong attacked the dinosaur. The meat eater managed to knock the young kong into a ravine by hitting him with its tail, then it and its offspring returned to their meal.

The roars for the Tyrannosaurus in The Last Dinosaur were produced from a combination of Godzilla and King Kong's roars from King Kong vs. Godzilla.

This is a list of references for Tyrannosaurus rex. These citations are used to identify the reliable sources on which this article is based. These references appear inside articles in the form of superscript numbers, which look like this: [1]

Showing 27 comments. When commenting, please remain respectful of other users, stay on topic, and avoid role-playing and excessive punctuation. Comments which violate these guidelines may be removed by administrators.

↑ back to top ・ contents
Retrieved from "http://wikizilla.org/w/index.php?title=Tyrannosaurus_rex&oldid=173358"
Categories: