The World of Kong: A Natural History of Skull Island

Specifically pertaining to the Brontosaurus baxterii species native to the 2005 King Kong film, after living on Skull Island for millions of years, their ancestral Brontosaurus population on Skull Island had evolved to give live birth, usually in litters of two to three. This was done to give calves, who could walk within hours of birth, the advantage of maneuverability to escape Skull Island's vicious predators. Herds were led by a single Bull Brontosaurus, who let off pheromones that prevented non-alpha Brontosauruses from reaching sexual maturity, so as to keep it as the father off all young. When females matured, they left to form new herds, leaving beta males, who seldom reached the size of a female behind, where they were effectively distractions for predators to keep the breeding stock safe. If predators did attack while grazing, Brontosauruses could send warnings to other members of the herd by stomping its feet on the ground, allowing the vibrations to sound the alarm. 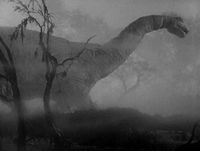 A Brontosaurus chasing after the Venture crew in King Kong (1933)

While the Venture crew pursued King Kong across Skull Island to rescue Ann Darrow, they came upon a large swamp. The men created a raft and attempted to cross the swamp, but the head of a Brontosaurus suddenly emerged from the water and destroyed the raft, grabbing several of the men in its mouth and tossing them away like ragdolls. Those who escaped swam to the shore and proceeded to run away into the woods, but the Brontosaurus climbed out of the water and followed them, charging through the forest and mounting a second attack. Jack Driscoll, Carl Denham and several other members of the crew scaled trees to escape, but those who were unable to follow them were quickly killed by the dinosaur. After roaring at the survivors, the Brontosaurus returned to the water and disappeared.

A Brontosaurus briefly appeared as Skull Island sank into the Indian Ocean.

A Brontosaurus walking through the forest

Brontosaurus in Kong: The Animated Series

A group of Brontosaurus lived on Kong Island and were frequent background characters.

While searching for Ann Darrow, who had been kidnapped by King Kong, Carl Denham and his crew came upon a herd of Brontosaurus grazing. Denham attempted to film the dinosaurs, but the brontosaurs suddenly became agitated and began to stampede. The crew ran from the herd, with many of the men being trampled beneath the sauropods' massive feet. Denham and the others soon learned what the Brontosaurus were running from; a pack of Venatosaurus, small predatory dinosaurs descended from dromaeosaurs. The Venatosaurus pounced on their prey, causing the Brontosaurus to fall over, crushing the humans beneath them and causing rock slides, while some of the men were mauled by the Venatosaurus. Eventually, Denham and some of his crew managed to escape the stampeding herd and continued their trek through the island.

"The Primordial World Below"

Far beneath the surface of the Earth, a Brontosaurus population survived the millennia undiscovered until several humans and King Kong fell into their subterranean world through a volcano. Two were spotted when they landed, and they later mistook a herd of their legs for a forest, and were nearly trampled by them before managing to escape unharmed.

While resting in a Skull Mountain Island lagoon, an aquatic Brontosaurus was disturbed by the crew of the Wanderer floating over the top of its submerged body in a makeshift raft. The Brontosaurus then lifted its head out of the water directly under the craft, breaking it to pieces in the process. The raging dinosaur chased after the fleeing sailors onto land, and ate a sailor who had climbed a tree in an attempt to escape it.

In the year 2009, a species of muddy yellow sauropods inhabited the swamps and waterways of Skull Island. While capable of coexisting with other species, as a young individual was seen wading while other animals drank. However, adults were gigantic and incredibly territorial. Two of them, possibly a male and a female, attacked a group of human scientists traversing the swamp. They charged and killed all but five of the team before one of the sauropods fell to their gunfire. The other yellow beast backed off for awhile, but came back when a helicopter came to rescue the survivors. The beast trampled three of them while running toward the machine, and reared up on its hind legs to attack, badly damaging one of its legs in the process. Despite this, it continued its attack, and all but beheaded itself in the process. However, the dinosaur did not stop its attack, despite its severed head. It damaged the helicopter beyond capacity to take off. Its body then crushed the vehicle, leaving no survivors. The two corpses were quickly leaped on by the scavengers of the island, from bugs, to birds and reptiles.

Kong: The 8th Wonder of the World

A herd of Brontosaurus lived in a valley in the Skull Island jungle, and they were discovered one day by a small group of humans. However, shortly after this encounter, the herd became frightened by an approaching pack of Giant venatosaurs and began to stampede.

One day in a jungle clearing, a lone Brontosaurus ran away from a pursuing Carnotaur.

While grazing in a narrow valley, a herd of Brontosaurus were happened upon by a group of human filmmakers just as a pack of Venatosaurus made their move. Sensing the danger, the sauropods began to flee. Shaking the ground with their steps, they ran toward the humans as the predators snaked in between and around them. Their thundering footsteps caused small rockslides off the valley walls, but when one man turned to shoot at a Venatosaurus, he missed and struck the lead Brontosaurus, who toppled over and tripped all of the stampeding dinosaurs behind it. The wall of sauropods were crawled over and preyed upon by the Venatosaurs before they moved on to the running humans.

King Kong: The 8th Wonder of the World

While a herd of Brontosaurus were traversing one of the ancient streets in the jungles of Skull Island, a group of humans drew close in order to film them. However, shortly after they began to shoot, a pack of Venatosaurus leaped off of ledges on the streets and attacked. This prompted the Brontosaurus began to stampede, and to trample on the filmmakers. Out of fear, one of the humans shot at the front-most Brontosaurus, causing it to trip and fall. This lead to the rest of the herd tripping over its wounded body, resulting in a massive pile-up of the dinosaurs. The Venatosaurus snapped at some of the Brontosaurus as they walked over the dense pile to get to the smaller prey.

This is a list of references for Brontosaurus. These citations are used to identify the reliable sources on which this article is based. These references appear inside articles in the form of superscript numbers, which look like this: [1]

↑ back to top ・ contents
Retrieved from "http://wikizilla.org/w/index.php?title=Brontosaurus&oldid=173360"
Categories: