Gogola is a reptilian kaiju that first appeared in the 1966 Indian kaiju film, Gogola.

One day, Gogola rose from the sea, terrorising some tourists on one of Mumbai's beaches. The authorities at first deny the kaiju's existence, and later, when compelled to take action, chase Gogola all the way to the sea-shore. The kaiju retreats to Mumbai's Wellington Pier, and starts attacking the city, flooding the streets with water. The military tries to defeat the reptilian monster, but Gogola destroys most of it.

Finally, in a last confrontation, the military kills Gogola.

Due to its great size and weight, Gogola, much like any other giant monster, possesses great strength and power.

According to the film’s script, Gogola was able to shoot a "fiery breath" from its mouth. This can also be seen in the movie's poster, although the beam comes from Gogola's nostrils. 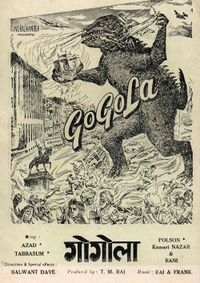 Gogola is amphibious, meaning that it can transport itself both in water and land.

Unlike many kaiju, Gogola is not immune to conventional weaponry.

27 months ago
Score 0
Good to see that this guy finally got a page on Wikizilla.
Permalink
↑ back to top ・ contents
Retrieved from "http://wikizilla.org/w/index.php?title=Gogola&oldid=148696"
Categories: