Triceratops (トリケラトプス,   Torikeratopusu) is a genus of herbivorous ceratopsian dinosaurs from the late Cretaceous period.

A Triceratops was featured in the 1977 film The Last Dinosaur, while a herd of Triceratops appeared in Rebirth of Mothra III.

A Triceratops in The Last Dinosaur

After stealing the Polar-Borer, the Tyrannosaurus rex tried to bury it in a cave near its lair. In the process, it awakened a Triceratops sleeping underground, who engaged it in a vicious battle. The Triceratops drew first blood, stabbing the Tyrannosaurus' chest with its horns and biting its leg. The Tyrannosaurus eventually gained the upper hand by throwing the Triceratops to the ground, then sinking its sharp claws into its enemy's stomach. Its powerful jaws delivered the final blow.

As Rainbow Mothra arrived in the Late Cretaceous period, a Tyrannosaurus rex pursued a herd of Triceratops nearby. As it bit into a straggler's neck, Cretaceous King Ghidorah seized it in his central head. Before he could abduct the Triceratops, Rainbow Mothra made his presence known with a volley of Cross Heat Rainbow Lasers.

After Rainbow Mothra severed part of Cretaceous King Ghidorah's tail with another Cross Heat Rainbow Laser, a Triceratops and a Tyrannosaurus observed the appendage as it burrowed underground and stared at each other in concern. 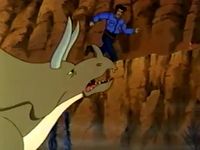 A Triceratops attacking Jack Driscoll in The Mighty Kong

A population of Triceratops lived on Skull Island, three of which engaged Kong while crossing a large asphalt flat. While they did outnumber him, Kong began to throw chunks of hardened asphalt and heavily wound the triceratopses, and while fleeing, two of them sank into wet asphalt and became stuck in it, and they presumably died there. The third, after running into the jungle with a broken horn, gores a sailor from the Wanderer before chasing the rest of his party to a chasm bridged by a log. As they made their way across, Kong appeared on the other side, making the lone triceratops enraged. The two began to shake the log until Kong threw it into the chasm and ran away to battle a meat-eater.

25 months ago
Score 0
This dinosaur was my favorite for a long time.
Permalink
↑ back to top ・ contents
Retrieved from "https://wikizilla.org/w/index.php?title=Triceratops&oldid=174361"
Categories: