Behemoth is a Titan who first appeared in the 2019 Legendary Pictures Godzilla film, Godzilla: King of the Monsters.

Behemoth is named after a beast mentioned in the Bible (בהמות Behemot), which is interpreted often as either referring to a mythical creature or a large animal such as an elephant or rhinoceros. Godzilla: King of the Monsters - The Official Movie Novelization also gives Behemoth the alternative name Mapinguary, derived from a Brazilian cryptid believed to resemble a giant sloth. 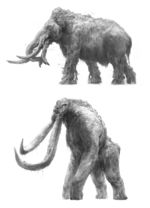 Behemoth was originally conceptualized as a giant mammoth, with tusks on his lower jaw similar to a Deinotherium and wood-like protrusions on his legs. Eventually, this design was discarded in favor of making the creature more like a giant sloth, although the mammoth-like tusks were retained. Footage of the Castle Bravo set shows that he was originally meant to emerge in Mexico.[1]

Behemoth is a mammalian creature resembling a gigantic sloth. He knuckle-walks like an ape using his long and muscular forelimbs which are larger than his hind legs. Behemoth's most notable trait are his colossal mammoth-like tusks which jut downward from his cheeks. Behemoth is covered in light brown fur, and appears to have greenish vines or algae growing on his otherwise gray tusks. Behemoth possesses a row of bumpy triangular spikes running along his back. Behemoth is very tall and appears to nearly match Godzilla himself in physical stature.

Behemoth was discovered by Monarch in Brazil, and an outpost was constructed around him. In Godzilla: King of the Monsters - The Official Movie Novelization, a Monarch agent named Mariko states, "There are cave paintings of him that are twelve thousand years old."[2]

Behemoth was among the many Titans awakened from his slumber in Brazil by King Ghidorah's call. He attacked Rio de Janeiro before making his way to Boston along with Methuselah, Scylla, a female MUTO, and a flock of Leafwings. There, they found the alpha they were following, Ghidorah, slain at the hands of Godzilla. Rodan approached Godzilla to challenge him, but was intimidated by his gaze and ultimately submitted. The other Titans all followed suit, each "bowing" in their own way to the new King of the Monsters. News outlets reported afterward that Behemoth's trail of destruction had begun to restore clear-cut parts of the Amazon rainforest.

Behemoth possesses two large tusks protruding from his face, similar to a woolly mammoth. He uses these large tusks to destroy structures in his path.

Behemoth's radiation is able to restore jungles he passes through. When he was heading towards Boston, news outlets reported that his trail of destruction restored clear-cut parts of the Amazon rainforest.

Behemoth's feces can be used as a viable energy source.

In Godzilla: King of the Monsters - The Official Movie Novelization, a jet of blue-white fire emitted from a nozzle installed in the ceiling of the outpost angers Behemoth but leaves his fur unharmed.

Godzilla: King of the Monsters - The Official Movie Novelization

Monarch prepared to terminate Behemoth when he responded to Ghidorah's call. However, an agent named Mariko, who sympathized with Emma Russell's mission and believed Behemoth to be "the most interesting of the Titans," cut the power to the outpost's backup kill switch. Behemoth quickly dispatched a group of soldiers and a nozzle emitting blue-white fire before breaking out of the facility, killing Mariko in the process. From there, his role in the novelization is the same as the film. 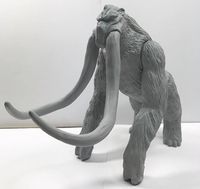 This is a list of references for Behemoth. These citations are used to identify the reliable sources on which this article is based. These references appear inside articles in the form of superscript numbers, which look like this: [1]

↑ back to top ・ contents
Retrieved from "http://wikizilla.org/w/index.php?title=Behemoth&oldid=159268"
Categories: