Balgaras resembles a Tyrannosaurus rex, with some minor alterations to its body. He has curved red dorsal plates running down his back in a similar fashion to a Stegosaurus', and he has pale spikes running down the outer sides of his legs. His skin is mostly white, but his belly is green with a red streak running down it. Similar red streaks run around his eyes, and he has red irises. Balgaras' Orb form maintains his coloring and some of his red spikes, but has an unusual, near-human face with a large nose and red eyes.

Balgaras was created by the Garogas when they placed an unknown reptile on the desolate Planet Bulgar. Over time, the animal mutated into Balgaras. A short while later, the Garogas obtain Smokey, the Zone Family's spaceship with Angel and Junior still onboard, and places it on Bulgar as bait, where Balgaras ambushes Zone Angel and Zone Junior. Zone Fighter arrives, and at first was having trouble coping with the monster's unusual abilities, but he lured it into a trap, injuring it with his Proton Beam. He then tore off one of Balgaras' dorsal fins and jammed it into their mouth, before finishing it off with his Meteor Missile Might attack. 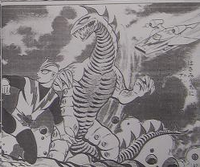 Balgaras in the Zone Fighter manga

Balgaras appears in a manga adaptation of his debut series. Similarly to his appearance in the TV series, he is deployed by the Garogas on an icy planet and captures Smokey, engaging in battle with Zone Fighter. To assist Balgaras, the Garogas send Gigan to assist the Terror-Beast, and the two monsters team up to fight Zone.

This is a list of references for Balgaras. These citations are used to identify the reliable sources on which this article is based. These references appear inside articles in the form of superscript numbers, which look like this: [1]

4 months ago
Score 0
This guy looks cool.
Permalink
↑ back to top ・ contents
Retrieved from "http://wikizilla.org/w/index.php?title=Balgaras&oldid=168987"
Categories: