The Giant Condor (大コンドル,   Ōkondoru), also known as the Giant Eagle (大ワシ,   Ōwashi), is a giant bird kaiju who first appeared in the 1966 Toho Godzilla film Ebirah, Horror of the Deep.

A giant bird mutated by the nuclear runoff produced by the Red Bamboo on Letchi Island, the Giant Condor attacked Godzilla after the latter had fought off a squadron of Red Bamboo fighter jets. The creature was no match for the King of the Monsters, who quickly set it ablaze with his atomic breath and sent it plummeting into the ocean. A Giant Eagle appeared in the dreams of young Ichiro Miki, in which it fought Godzilla on Monster Island but met the same fate as the Giant Condor. Though the Condor has not often appeared since then, several were mentioned in passing in the novel GODZILLA: Project Mechagodzilla.

This monster has two different names for its two appearances: Giant Condor (大コンドル,   Ōkondoru) in Ebirah, Horror of the Deep and Giant Eagle (大ワシ,   Ōwashi) in All Monsters Attack. It is actually called the "Giant Eagle" by Ichiro in the Japanese dialogue for All Monsters Attack, but goes unnamed in the English dub.

In 1966, Toho partnered with Rankin-Bass to produce a live-action film version of The King Kong Show, with Shinichi Sekizawa writing the script for Operation Robinson Crusoe: King Kong vs. Ebirah. According to the book Japanese SFX and Fantasy Movies, he created the Giant Condor as a homage to the Pteranodon seen in the original King Kong.[4] Though it may be coincidence, Kong also battled an oversized condor in at least one episode of the cartoon. Rankin-Bass rejected the script, but since Toho had already started making the sets and props, they simply swapped Kong for Godzilla and carried on, resulting in Ebirah, Horror of the Deep.

The Condor was portrayed using a remodeled Rodan prop which appeared in Ghidorah, the Three-Headed Monster and Invasion of Astro-Monster, following its use as the monster Litra in Tsuburaya Productions' Ultra Q.[5][6] The modifications were likely performed by Toho's then-chief modeler, Teizo Toshimitsu.[6] The Giant Condor reappeared in All Monsters Attack as the Giant Eagle, though no new footage was shot of the monster.

While the Giant Condor's origins are not disclosed during the events of Ebirah, Horror of Deep, Tomoyuki Tanaka states in his 1984 book Definitive Edition Godzilla Introduction that the Condor was a bird native to Letchi Island which was mutated into a monster by the Red Bamboo's nuclear wastewater, similar to Ebirah.[2] It is unknown whether the Giant Condor was employed as a defense by the Red Bamboo, or simply attacked Godzilla of its own free will.

Ebirah, Horror of the Deep 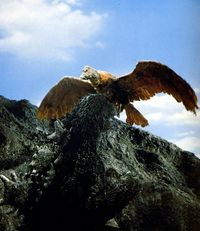 The Giant Condor battling Godzilla in Ebirah, Horror of the Deep

As Daiyo made her escape from a sleeping Godzilla, the Giant Condor suddenly soared overhead. She cried out to alert the King of the Monsters just before the bird descended on him. After a fierce scuffle, Godzilla set it ablaze with his atomic breath, and it plummeted into the ocean below.

In the dreams of Ichiro Miki, Godzilla was wandering around his home of Monster Island only to be attacked by the Giant Eagle. Godzilla fought briefly with the avian monster, but killed it with a blast of its atomic breath and sent its burnt corpse falling into the ocean.

The Giant Condor is capable of flight at speeds of up to Mach 1.[7]

While not exhibiting any uncanny abilities during his brief encounter with Godzilla, the Giant Condor was shown to fight tooth-and-nail using its sharp beak and talons.

The Giant Condor was not shown to be particularly resilient, being easily repelled by Godzilla and dispatched with a single blast of his atomic breath.

This is a list of references for Giant Condor. These citations are used to identify the reliable sources on which this article is based. These references appear inside articles in the form of superscript numbers, which look like this: [1]

Showing 24 comments. When commenting, please remain respectful of other users, stay on topic, and avoid role-playing and excessive punctuation. Comments which violate these guidelines may be removed by administrators.

↑ back to top ・ contents
Retrieved from "http://wikizilla.org/w/index.php?title=Giant_Condor&oldid=167174"
Categories: