The Giant Condor kaiju profile is the 57th episode of Wikizilla's Kaiju Profiles video series. It was uploaded on April 1, 2020. 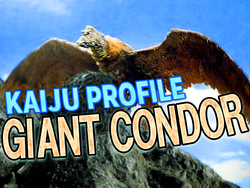 Hey kaiju fans, I'm Michael, and today we'll be taking a look at one of Godzilla's deadliest opponents to date! Well, okay, it's in the 25th percentile at best—the Giant Condor!

The Giant Condor made its sudden debut in 1966's "Ebirah, Horror of the Deep," where it met an equally sudden end in battle against the King of the Monsters. According to producer Tomoyuki Tanaka in his 1984 book "Definitive Edition Godzilla Introduction," it began life as an ordinary bird native to Letchi Island. When the terrorist organization Red Bamboo set up a base on the island, wastewater from their nuclear reactor transformed it into a monster, much like Ebirah. English-speaking fans sometimes call it Ookondoru, its Japanese name, because the translation is so generic. In "All Monsters Attack," where it returned via the magic of stock footage, Ichiro identified it as a 'Giant Eagle' instead [Ichiro: オオワシ].

In 1966, Toho partnered with Rankin-Bass to produce a live-action film version of "The King Kong Show", with Shinichi Sekizawa writing the script for "Operation Robinson Crusoe: King Kong vs. Ebirah." According to the book "Japanese SFX and Fantasy Movies", he created the Giant Condor as a homage to the Pteranodon seen in the original "King Kong." However, it's worth noting that Kong battled an oversized condor in at least one episode of the cartoon. Rankin-Bass rejected the script, but since Toho had already started making the sets and props, they simply swapped Kong for Godzilla and carried on. Ultimately, the companies' efforts to adapt "The King Kong Show" would result in "King Kong Escapes" the following year.

The Giant Condor prop was originally a Rodan prop which appeared in "Ghidorah, the Three-Headed Monster" and "Invasion of Astro-Monster". Then, Tsuburaya Productions converted it into Litra for "Ultra Q." Its final makeover was likely performed by Toho's chief modeler at the time, Teizo Toshimitsu.

Ebirah, Horror of the Deep (1966): As Daiyo made her escape from a sleeping Godzilla, the Giant Condor suddenly soared overhead. She cried out to alert the King of the Monsters just before the bird descended on him. After a fierce scuffle, Godzilla set it ablaze with his atomic breath, and it plummeted into the ocean below.

All Monsters Attack (1969): Schoolboy Ichiro Miki imagined a Giant Eagle on Monster Island in his dreams. After a fierce scuffle, Godzilla set it ablaze with his atomic breath, and it plummeted into the ocean below.

The New Edition of the "Godzilla Dictionary" credits the Giant Condor with a maximum flight speed of Mach 1, though it never approached that in the film.

Physical capabilities: Despite being much smaller than Godzilla, it held its own against him for a time using its sharp beak and talons. Its real failing was its durability, becoming the first of only a handful of kaiju in the Godzilla series who failed to survive a single blast of atomic breath.

The Gigantic Condor: Even a kaiju as obscure as the Giant Condor isn't immune to the scourge of inconsistent stats in Japanese books. While most sources assign it a length of 15 meters, a wingspan of 25 meters, and a weight of 2,000 metric tons, a few exaggerate its size and lowball its mass. "Kaiju Kaijin Complete Works 1: Godzilla" is the most ridiculous, giving it a staggering 70-meter wingspan.

On Wings of Death He Comes: The marketing for "Godzilla" (2014) held back on showing the MUTOs clearly for a long time. After Warner Bros. released the second trailer, leading to speculation on more uninformed corners of the Internet that the Male MUTO was Rodan or Mothra, kaiju fans began to joke that he was really the Giant Condor. I wasn't the first, but I did my part to keep the joke going on Tumblr. And boy, did it keep going… well into 2015! Deprived of so much as a cameo in the manga adaptation of its own film, the Giant Condor was relevant again.

A Quiet Return: After 49 years on the sidelines, the Giant Condor finally came back for "GODZILLA: Project Mechagodzilla", as one of the many monsters who plagued United Earth soldiers in Africa during the counter-Godzilla plan "Operation: Long March". Unfortunately, it was only mentioned twice in passing.

Rest in Pieces: After going through the game files for "Godzilla Defense Force," Toho Kingdom discovered a sprite asset list for the Giant Condor. It was intended as a regular stage enemy instead of a boss monster, but with no major updates for the game since August 2019, it seems unlikely that players will ever get to face it.

That's all we have on the Giant Condor for now, although as one of the only kaiju to fight both King Kong and Godzilla, I think it's obvious he'll be the secret antagonist of the next MonsterVerse film. Thanks for watching, and always remember: The arrogance of man is thinking puppets are in our control... and not the other way around.