The Monster X and Keizer Ghidorah kaiju profile is the 19th episode of Wikizilla's Kaiju Profiles video series. It was uploaded on November 2, 2017.

Written by The King of the Monsters, Titanollante
Narrated by The Boy Who Cried Godzilla 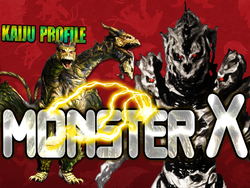 Hello kaiju fans, this is The Boy Who Cried Godzilla, and today we're talking about Monster X and Keizer Ghidorah!

First appearing in 2004's "Godzilla: Final Wars," Monster X was the most powerful of the Xiliens' legion of monsters. Godzilla's final opponent in the Millennium series, he was also his last onscreen foe for a period of 10 years and the final brand new Toho kaiju until the Servum.

Unlike most of the Xiliens' other mind-controlled monsters, Monster X displays true malice in his battle with Godzilla, fighting viciously and relentlessly even after the Xiliens' ship is destroyed and any potential mind control over him is severed. After transmogrifying into Keizer Ghidorah, he blasts and beats Godzilla mercilessly across Tokyo, throwing the Monster King around with his antigravity beams and kicking the weakened Godzilla in the head. According to the "Godzilla: Final Wars" theater program, Keizer Ghidorah is canonically the strongest member of the Ghidorah group, and is often referred to as being one of the strongest monsters in the Godzilla franchise.

Monster X's name, though generic and used for other monsters previously, is possibly a reference to "Monster Zero" (an alias for King Ghidorah), with the "X" in his name derived from the Xiliens' Japanese name, the "X Aliens." Meanwhile Keizer Ghidorah's name comes from the German word "kaiser," meaning emperor, and "Ghidorah." This name was chosen to position Keizer Ghidorah above King Ghidorah: Emperor above King.

Both Monster X and Keizer Ghidorah were designed by illustrator Katsuya Terada, who did character designs for projects such as "The Legend of Zelda." Monster X is a bipedal creature with a bone-like black and white exoskeleton; an intentional design choice meant to give the impression of Keizer Ghidorah's bones. He possesses two small half-skulls on his shoulders and a long black forked tail. Monster X has red eyes, a skeletal face, and long spikes on the top of his head.

Aside from being summoned from the Gorath asteroid by the Xilien race as their final weapon against Godzilla, Monster X’s origins are never revealed.

Monster X was summoned by the Controller of Planet X through the Gorath asteroid. As the asteroid rapidly approached in the skies above Tokyo, Godzilla destroyed it with his Hyper Spiral Heat Ray. Monster X then floated down, and the two began fighting. Eventually, the modified Gigan arrived to assist Monster X. When Mothra arrived and knocked the alien monsters down, Mothra and Gigan proceeded to fight and destroy each other. The monsters resumed their battle, with Godzilla gaining the upper hand and pinning his opponent to the ground. He then tried to blast Monster X in the face with his atomic breath, but the Space Monster pushed Godzilla's head away, causing the beam to strike the Xilien Mothership instead. After the Mothership exploded and the Xiliens were destroyed, both monsters engaged in a beam-lock, causing them to be blown back. Weakened, Monster X proceeded to transmogrify into Keizer Ghidorah.

The Demon Beast repeatedly attacked the outmatched Godzilla with his antigravity beams, tossing him across the ruins of Tokyo like a ragdoll, eventually approaching the fallen Monster King and lifting him into the air to drain his energy. The crew of the Gotengo watched Godzilla being drained of life, and Shinichi Ozaki used the ship's Maser Cannon to transfer some of his Keizer energy into the dying kaiju. Godzilla was re-energized and released a shockwave, breaking free. Keizer Ghidorah tried to retaliate, but Godzilla blasted off his middle head with an atomic blast and tricked him into severing another head. Finally, Godzilla threw Keizer Ghidorah into the air and blasted him with his Burning G Spark Heat Ray, killing the space monster.

Strength and Durability: Monster X is a physical match for Godzilla with his rapid melee attacks and impressive agility. Monster X is also the only monster Godzilla fought in "Final Wars" that survived getting blasted by Godzilla's atomic breath at point-blank in the face, actually appearing to shrug the attack off, as well as the only one able to bring Godzilla to his knees and make him roar out in pain with just one attack. Keizer Ghidorah trades Monster X's agility and exoskeleton for an exorbitant amount of power, being said to be the strongest member of the Ghidorah group in the "Godzilla: Final Wars" theater program. He is able to send Godzilla flying with a mere kick, clobber Godzilla with super-weight body presses, and easily lift him with his neck strength. Exceeding Godzilla's power in all aspects except for durability, which while it is said to be weaker than Monster X's, he is still unfazed by any of Godzilla's attacks until the King of the Monsters is revitalized by Ozaki's energy.

Destroyed Keizer: Keizer Ghidorah possesses a more powerful antigravity variant of Monster X's Destroyed Thunder, spit in continuous streams from all three of his mouths. The Destroyed Keizer antigravity beams are seemingly stronger than Godzilla's atomic breath and can be sustained for long periods of time. Keizer Ghidorah can also guide their paths and pick up and throw objects with them in a telekinetic fashion, being able to lift the 55,000 metric ton Godzilla with ease.

Energy Absorption: Keizer Ghidorah demonstrates the ability to directly siphon energy from Godzilla by biting down on him. His necks glow as the energy passes through them, in the case of Godzilla's energy a cyan color. However, Godzilla was able to break free after using the Keizer energy from Ozaki to overload Keizer Ghidorah's absorption, forcing him to release the King of the Monsters.

Flight: Monster X is capable of levitating for a short period of time, while Keizer Ghidorah is capable of full-on flight, although this is never shown in the film and is only demonstrated in the IDW "Godzilla" comic.

Weaknesses: Keizer Ghidorah becomes disoriented after losing his middle head, and is easily defeated by Godzilla after this point. He is vulnerable to his own Destroyed Keizer antigravity beams, and in "Godzilla: Final Wars" is tricked by Godzilla into severing its right head using these beams, while in "Godzilla: Ongoing" it bites off its left head. Keizer Ghidorah is severely outmatched after Godzilla is empowered with Ozaki's Keizer energy, with his atomic breath being capable of obliterating Keizer Ghidorah's middle head in a single hit. Godzilla's more powerful Burning G Spark Heat Ray was capable of pushing Keizer Ghidorah into outer space and completely destroying him.

Toho intended to keep Monster X's transformation into Keizer Ghidorah a secret prior to the release of Godzilla: Final Wars, copyrighting the later as "Monster X II." However, the fansite Henshin!Online leaked Keizer Ghidorah's role on July 6, 2004.

Keizer Ghidorah drew inspiration from several other kaiju. Most overtly, his design and his antigravity beams are based on King Ghidorah, though their telekinetic properties are reminiscent of SpaceGodzilla's Gravity Tornado. Also, the Demon Beast's energy siphoning ability is directly inspired by Iris from "Gamera 3." Finally, Keizer Ghidorah was portrayed by both Monster X actor Motokuni Nakagawa and Toshihiro Ogura, through what is referred to as the "Dodongo system," named after the quadruped Ultra kaiju, with one actor for each pair of legs.

Monster X appears in the 2011-2013 IDW comic "Godzilla" alongside SpaceGodzilla, Gigan and Hedorah. He first appears in issue 8 where he attacks New York before fighting Mothra. After his fight, he manages to dispatch her before Boxer, Harrison and Asuka Hikari arrive in Kiryu along with Kumonga. After dispatching Kumonga, Monster X engages in a brief fight with Kiryu before SpaceGodzilla and Godzilla show up. In the battle that follows, Monster X transmogrifies into Keizer Ghidorah and gains the upper hand over the King of the Monsters. However, Rodan soon arrives to assist Godzilla, managing to decapitate one of the space beast's heads by creating a sonic boom from his wings. Eventually with Rodan's help, Godzilla is able to overcome and kill Keizer Ghidorah.

That is all there is to know about Monster X. Thanks for watching, and we'll see you next time!