The Fake Godzilla kaiju profile is the 25th episode of Wikizilla's Kaiju Profiles video series. It was uploaded on April 1, 2018. 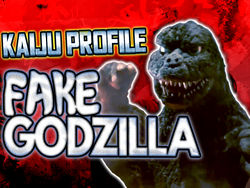 Fake Godzilla is a robotic Godzilla impostor that first appeared in "Godzilla vs. Mechagodzilla." When it first emerged from Mount Fuji, Mechagodzilla wore a pseudo-reptilian skin that allowed it to almost seamlessly resemble the King of the Monsters. This disguise was damaged in battle with Anguirus, and eventually completely removed in battle with Godzilla himself. Despite most often being a disguise, Fake Godzilla appeared as its own individual character in the 1997 TV series "Godzilla Island."

Fake Godzilla is portrayed with two suits in "Godzilla vs. Mechagodzilla." The first suit used was the modified MegaroGoji suit (also known as MekaGoji for this film), which was used for the real Godzilla throughout the film. The second suit had a similar body design but had a noticeably different head. This second suit appeared again in "Terror of Mechagodzilla," used at the end of the film to portray Godzilla wading out to sea.

Director of special effects Teruyoshi Nakano has stated that switching the suits used for Fake Godzilla between scenes was actually done intentionally. Nakano stated that they wanted children to notice the difference in the suits and wonder if something was off about Godzilla.

In its first appearance, Fake Godzilla was a disguise used by the Black Hole Planet 3 aliens in order to hide Mechagodzilla.

In "Godzilla Island," Fake Godzilla was a robotic impostor used by the Xiliens to frame the real Godzilla.

Godzilla vs. Mechagodzilla (1974): Fake Godzilla first appeared at Mount Fuji and attacked a nearby apartment building. Anguirus soon arrived and attacked the impostor, realizing he was a fake. He tore off a piece of its skin, revealing metal underneath. Fake Godzilla then broke Anguirus' jaw, forcing him to retreat back underground. It was attacked by the real Godzilla later that night while attacking Tokyo, and they fought until Fake Godzilla was revealed to be an impostor.

Fake Godzilla appeared, as his own character, in the third story arc of Godzilla Island, where he was controlled by Zaguresu and went on a rampage across Japan. Believed to be the real Godzilla, he was put in a cave in handcuffs. The cave was blocked by metal bars, almost like he was in jail. Megalon and Battra flew to Godzilla Island and attacked. They were eventually driven off after a quick fight, but this distraction allowed Fake Godzilla to escape. He rampaged through Japan again. Still thinking he was the real Godzilla, the G-Guard Commander warned that if Fake Godzilla didn't stop, he would have to be destroyed. Torema flew to Japan and pleaded for Fake Godzilla to stop, but was shot down. However, the ship was grabbed. The real Godzilla had come. He blasted the doppelganger, burning off some of its skin and revealing metal inside, proving he was a fake. Godzilla easily destroyed the copycat, and Zaguresu then revealed she had tried to frame Godzilla the whole time.

Laser Beam: Fake Godzilla can fire a yellow laser beam out of its mouth, emulating the atomic breath of Godzilla. This beam is able to destroy several buildings in a single strike, and is also shown to hurt the Monster King. Fake Godzilla also possesses an atomic breath in "Godzilla Island," though it is blue like the real Godzilla's.

Weaknesses: Fake Godzilla is unable to utilize the majority of Mechagodzilla's arsenal of weapons due to its disguise. Its disguise is also easily damaged in battle against Anguirus and Godzilla, quickly exposing it as a fake. In "Godzilla Island," the impostor is easily destroyed by a mere two blasts of the real Godzilla's atomic breath.

While Fake Godzilla only reappears in "Terror of Mechagodzilla" in the form stock footage used in the opening credits of the film—where it is also given Godzilla's roar instead of the Mechagodzilla roar—the disguise was originally intended to fully return in the movie. Mechagodzilla was to wear the disguise and attack Tokyo alongside the Titans (proto-versions of Titanosaurus) in an early version of the movie.

Fake Godzilla has appeared repeatedly throughout games. It appears in the U.S. version of Super Godzilla as its weakest enemy, only needing one hit to be defeated. However, once hit, it becomes Mechagodzilla, the true boss of the stage. Next, it returns in the Game Boy "Godzilla, King of the Monsters" in Level 5, sandwiched between the Mechagodzilla (Flying) and Mechagodzilla (Land) battles. Additionally, it's featured in the 1-Player mode of the Godzilla arcade game, where it again is fought before the Showa Mechagodzilla, and in "Godzilla: Archipelago Shock," where upon having its HP drained, it's revealed to be MG.

Finally, a replica of the MegaroGoji suit (resembling the Fake Godzilla version) was constructed in 1979 surrounding Godzilla's 25th anniversary, and was later worn by original Godzilla suit actor Haruo Nakajima for a 1983 photoshoot for the Japanese magazine "Uchusen." This was purportedly one of, if not the, last time Nakajima wore a Godzilla suit.

That's it for Fake Godzilla. As for the actual mech under the suit…