The Showa Mothra kaiju profile is the 10th episode of Wikizilla's Kaiju Profiles video series. It was uploaded on April 10th, 2017.

This video corresponds to the Showa series's 1st, 2nd, and 3rd Generation Mothras. 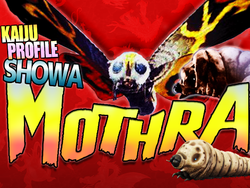 and today we’re gonna take a look at the Mightiest Monsters in All Creation: the Showa incarnations of Mothra!

Mothra first appeared in the 1961 serialized novel The Luminous Fairies and Mothra written by Takehiko Fukunaga, Shinichiro Nakamura, and Yoshie Hotta and published in Asahi Weekly magazine. The novel was quickly adapted into a film by Ishiro Honda and Shinichi Sekizawa.

To get this out of the way quickly, there are 3 generations of Mothras in the Showa series. The first Mothra appears in the 1961 film “Mothra” and then dies in “Mothra vs. Godzilla.” The second generation Mothras were twins hatched from an egg in “Mothra vs. Godzilla.” In between the events of “Mothra vs. Godzilla” and “Ghidorah, the Three-Headed Monster,” one of these larvae died. The remaining larva went on to fight King Ghidorah alongside Rodan and Godzilla, and returned in Imago form in “Ebirah, Horror of the Deep.” Finally a third Mothra appears in “Destroy All Monsters.” Her relation to the previous Mothras is unknown.

In the original 1961 movie, the first Mothra measured 180 meters from head to tail as a larva and 60 meters in Imago form with a wingspan of 250 meters. In “Mothra vs. Godzilla”, this Mothra’s length was retconned to 65 meters and her wingspan scaled down to 135 meters, her weight always being 15,000 metric tons.

The second generation Mothras measured 40 meters in length with weights of 8,000 metric tons. The surviving second generation Mothra went on to become the Imago Mothra in “Ebirah, Horror of the Deep,” and was, like her mother was retconned to, 65 meters in length with a wingspan of 135 meters and weighing in at 15,000 metric tons.

As a larva, Mothra typically appears as a slender, segmented, brown silkworm with blue eyes. As an adult moth, or Imago, Mothra sports brightly colored yellow and orange wings with an orange and white head, blue eyes, a brown and white striped thorax and six thin legs with two digits on each, and two white antennae. All the Mothra puppets bear minute differences from each other, so check out their pages on Wikizilla.org for more detailed information.

Mothra is the guardian goddess of the remote Infant Island in the south Pacific Ocean. There, she is perpetually reborn through an egg and is worshiped by the island's natives. She is spoken for by two miniature telepathic fairies called the Shobijin.

Mothra (1961): After a scientific expedition to the irradiated Infant Island by the country of Rolisica, the Shobijin fairies were kidnapped by enterprising businessman Clark Nelson. They began to pray for their rescue to Mothra, who hatched from its egg in response, and made its way to Tokyo. Mothra survived the barrage of military attacks on its way, and made a cocoon on Tokyo Tower. When Nelson was forced to release the Shobijin, he returned in secret to Rolisica with his captives. When Mothra came out of her cocoon, she continued her mission to rescue the Shobijin by tracking Nelson to Rolisica’s New Kirk City. The New Kirk Police found and killed Nelson in a firefight, and the Shobijin were returned to Mothra at a nearby airport runway.

Mothra vs. Godzilla (1964): After a hurricane, an enormous egg washed ashore in Japan. While the scientific community attempted to study the egg, a businessman bought the egg from the villages who discovered it, and planned to build an amusement park around it. The Shobijin then appeared to the businessman and his employer, Jiro Torahata, and explained that the egg was Mothra’s and that they should return it to Infant Island. The fairies were then laughed out of the office. They sought the help of the scientific team that had been interested in studying the egg. While they wanted to help, they were powerless against the laws protecting ownership of the egg. During a later experiment, Godzilla rose out of the earlier hurricane’s floodplain. The scientific team then went to Infant Island where they asked the islanders and the Shobijin for Mothra’s help in eliminating Godzilla. They were refused by the Infant Island Chief as revenge for the nuclear testing that had devastated the island, and for their failure to return the egg. They then spoke to the Shobijin, who wanted to help them, but felt that Mothra had grown too weak to return to the island after the battle. Despite their concerns, Mothra arrived just as Godzilla was attacking her egg, saving it at the cost of her own life. Soon afterwards, the egg hatched two larval Mothras that followed Godzilla to a nearby island and encased him in silk until he fell into the ocean.

Ghidorah, the Three-Headed Monster (1964): When King Ghidorah came to earth in an asteroid, Godzilla and Rodan were awakened and began to fight. After its twin died of unknown causes, the last remaining Mothra and the Shobijin left their island to try to unite the monsters against Ghidorah, but they made it clear that they had no intention of helping mankind. Mothra then went to fight a losing battle against Ghidorah, which inspired Godzilla and Rodan to help in light of Mothra’s selflessness. With their combined efforts, they were able to drive off the alien threat, and Mothra swam back to Infant Island.

Ebirah, Horror of the Deep (1966): After a terrorist organization named Red Bamboo kidnapped dozens of Infant Islanders and put them to work producing a chemical that would keep the giant prawn Ebirah away from their ships, the few remaining Islanders began to attempt to awaken the now fully grown Mothra from her sleep to embark on a rescue mission. Eventually, Mothra awoke and headed to Letchi Island where the Red Bamboo was stationed, just as Godzilla was destroying it. Mothra rescued the islanders and prepared to leave the island, but Godzilla began to fight her. Realising the countdown was almost up, Mothra knocked Godzilla down and flew away, travelling back to the safety of Infant Island with the natives.

Destroy All Monsters (1968): The officially-designated third generation Mothra (whose relation to the previous Mothras is unknown) is shown living in Monsterland with the rest of the world’s kaiju at the end of the 20th century, so that they could be researched by the scientists on the island. Eventually, the Monsterland facility was taken over by the Kilaak alien race, who took control of the monsters and sent them to destroy major cities in the world. Mothra was sent to Beijing, China. After being put back under the control of the United Nations Science Committee, Mothra joined the rest of her Monsterland inmates to attack King Ghidorah at the Kilaak stronghold at Mount Fuji. When the Kilaaks were defeated, Mothra and the other monsters returned to Monsterland where they continued their lives.

Silk Production: In her larval form, Mothra’s main weapon is streams of silk that she can shoot from her mouth.

Strength and Durability: In addition to being virtually impervious to conventional weapons, Mothra has exhibited immense physical strength, able to drag Godzilla across the ground by his tail or knock him off his feet with a swing of her wings.

Asexual Reproduction: Mothra is capable of laying eggs without a breeding partner, and can lay eggs that hatch at least one larva.

Flight: Imago Mothra is able to fly at a speed of mach 3.

Poison Powder: Mothra can release clouds of toxic yellow powder from her wings. The Shobijin refer to this attack as her final weapon, and using this attack results in Mothra’s death.

Mothra was the first kaiju to face Godzilla that originated in another Toho film.

The first Mothra larva suit was operated like a Chinese dragon, with Haruo Nakajima in the front and other suit actors behind. The suit was nearly 40 feet in length. This was the only time Toho used such an approach for one of their kaiju.

In the original 1961 novel, Mothra’s Shobijin are referred to as the Airenas, with the most notable difference between them being that there were many more Airenas.

In the American poster for “Mothra vs. Godzilla,” Mothra was depicted as a giant otherworldy creature with tentacles, referred to only as ‘the thing.’ Though this was censored on most posters, an uncensored interpretation of this can be seen in its entirety on the Italian poster. She is also called “the Thing” several times during the English dub.

"Destroy All Monsters" is the only movie Mothra appeared in during the Showa era where she was not seen with her Shobijin.

Though it may seem like Mothra and Godzilla were enemies in “Ebirah, Horror of the Deep,” this was because the role for Godzilla was originally written with King Kong in mind.

Anatomical diagrams of Mothra reveal interesting anatomical features: The larval Mothra, aside from plainly obvious features such as her eyes, possesses a cerebral ganglion (the equivalent of a brain), a powerful stomach, respiratory pores (spiracles), cilium [cilia], a spinning sack, nerve ganglion, a thread sack, an esophagus, a muscle for moving her sturdy jaw, antennae, and an anus.

For Imago Mothra, the individual strands of ‘feathers’ that make up Mothra’s wings can secrete her poison powder. In addition, she has lungs, an organ for laying eggs (ovipositor) with an egg sac, a malipighian tubule system, intestines, and an anus. Other features include her compound eyes, her antennae (which sense the Shobijins’ telepathy), a trachea, and other system carried over from her larva form. She is also said to exude a vapor that makes radiation harmless.

And that’s Wikizilla’s Kaiju Profile on the Showa era’s Mothras. Thank you all for watching, and we’ll see you next time.