The Universal King Kong kaiju profile is the 6th episode of Wikizilla's Kaiju Profiles video series. It was uploaded on March 5, 2017.

This video corresponds to the 2005 King Kong. 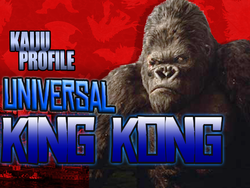 This Kong was created by Peter Jackson and Fran Walsh based on Merian C. Cooper’s 1933 monster of the same name, and debuted in Universal’s 2005 film King Kong. He stands 7.62 meters (25 feet) tall, and weighs 5 tons.

Out of all interpretations of Kong, Universal’s is the most like a real gorilla, walking primarily on all fours, and exhibiting more ape-like behavior. Kong’s design is that of a male silverback gorilla with dark skin, matted black hair and scarring on most of his body.

While his origins are unknown, Kong is heavily implied to be the last of his species, a possible descendant of the ancient giant ape Gigantopithecus, but may have lived among others of his race at some time. Eventually he came to be worshiped as a god by the tribe of humans indigenous to his home on Skull Island, and they later made it tradition to sacrifice a girl to Kong whenever they felt tremors on the island. This practice may coincide with the the island’s continual sinking into the ocean.

After years of receiving girls as sacrifices by the islanders, Ann Darrow--an actress caught by the islanders off an expedition to Skull Island--was offered to King Kong as a sacrifice, which he accepted. Kong carried her away, but much to Kong’s rage and bewilderment, she actually fought back against him. To try to entertain Kong, Ann began to perform her vaudeville act for the ape, which entertained him while she was doing it.

When Ann became tired and refused to perform anymore, Kong stormed off angrily. He encountered the film crew, searching for Ann to rescue her, crossing a log bridge spanning a ravine. He grabbed the bridge and twisted it, sending the party falling into the chasm below, where most of them were killed by gigantic insects.

While Kong was gone, Ann tried to run away but found herself being pursued by a Foetodon, a giant crocodile. Ann ran from it, only to witness the Foetodon being eaten by a Vastatosaurus Rex, the modern descendant of the tyrannosaurus. The V-Rex chased Ann and was joined by another member of its kind. Kong arrived just in time and tried to fight off the V-Rexes. A third V-Rex entered the battle and the odds were turned against Kong. Kong incapacitated one of the V-Rexes, but the other two continued relentlessly attacking him and Ann. Eventually, Kong and the two remaining V-Rexes fell over a cliff and into a thick layer of vines. Kong grappled with the V-Rexes, causing one to become entangled and trapped in the vines. Kong grabbed Ann and fell from the vines to the ground. One of the V-Rexes followed them and continued its attack. Kong fought with the V-Rex once again, and this time gained the upper hand. Kong restrained the V-Rex and pried its jaws apart until they snapped, killing it. Ann, grateful for Kong saving her life, allowed herself to be taken by Kong back to his mountain lair.

At the mountain lair, the search party had arrived and managed to rescue Ann Darrow. Furious, Kong chased them through the jungle all the way to the island’s coast where they caught him in a net and used chloroform gas to incapacitate him for the voyage to New York City. There Kong, under the name King Kong: The Eighth Wonder of the World, he acted as the main attraction in a Broadway show designed to recreate the events of the expedition to Skull Island. When the actress hired to play Darrow got onstage, Kong began to try to break the chromed steel chains binding him to the stage in order take her back. Upon discovering that it was not the real Ann, Kong broke his chains and destroyed the theater before heading out into the city to search for her.

In an attempt to keep Kong from hurting anyone else, Ann allowed Kong to take her. They spent some time in Central Park before the Military attacked them and sent King Kong into a rage. Kong then began to scale the Empire State Building with Ann in hand. At the top, the two watched the sunrise before military airplanes came to attack Kong. He placed Ann safely on one of the observation decks, and allowed himself to fall from the building after being shot by the planes. As crowds gathered around Kong's colossal corpse, someone remarked that the airplanes got Kong. Carl Denham sorrowfully said that it wasn't the airplanes, as "It was beauty killed the beast."

Gorilla Physiology Other than his immense size, Kong exhibits no extraordinary abilities save for his physical strength, with which is able to break chromed steel chains.

King Kong is portrayed through motion capture by Andy Serkis.

In a 2005 children’s book titled King Kong: Kong’s Kingdom, Kong and Darrow come across a statue of a member of Kong’s species on their trek through the jungle, but Kong did not immediately recognize it as one of his own, suggesting that he had both lived, and been alone on his island for a very long time.

And that’s Wikizilla’s Kaiju Profile on Universal’s King Kong. Thank you all for watching, and I’ll see you next time, for more Kong Month!