The anime Ghidorah kaiju profile is the 41st episode of Wikizilla's Kaiju Profiles video series. It was uploaded on January 24, 2019.

Written by The King of the Monsters, Astounding Beyond Belief, Titanollante, Les
Edited, voiced by Titanollante 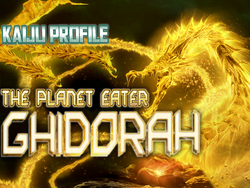 Hello kaiju fans, Titano here… this time, we're taking a look at the God of the Void—GODZILLA: The Planet Eater's Ghidorah!

First named by the Exif archbishop Metphies in the post-credits scene of "GODZILLA: City on the Edge of Battle," Ghidorah is a monstrous entity which resembles a golden three-headed dragon and inhabits the void between dimensions. 100,000 years ago, Ghidorah destroyed the Exif home planet of Exifcalus, and the Exif which survived the event took to the stars to find new worlds to appease their deity's insatiable hunger. Over the ensuing millennia, they acted as missionaries, seeking out planets in need and converting their inhabitants to their faith. With the planet's native inhabitants indoctrinated into their religion, the Exif would finally summon Ghidorah, who would consume the planet and wipe out all of its life. Their mission eventually brought them to Earth, where humanity was faced with extinction at the hands of Godzilla.

Like Godzilla Earth, Ghidorah's design was inspired by plants, specifically roses and other flora with thorns. According to the anime trilogy's co-director, Hiroyuki Seshita, Ghidorah was designed to appear both fearsome and divine, even to those who do not believe in a religion. Seshita prepared a rough sketch of Ghidorah, the central theme of which was "lightning." He based this sketch on the description of the monster given in Gen Urobuchi's screenplay. The design shared a few basic traits with past incarnations of King Ghidorah, but Seshita believed that being overly conscious of those designs would limit the filmmakers' ability to do something new with the character. Eiji Kawada developed Seshita's sketch into a CG model. To suggest that Ghidorah was a, quote, "completely differently evolved Godzilla," he used the Godzilla-derived Servum's model as a base for Ghidorah's.

In the film itself, only Ghidorah's necks and heads are seen in full emerging from black portals, with the silhouette of his entire body appearing in visions. His necks appear proportionally much longer after passing through these portals than they do in the silhouette or on Ghidorah's full CG model. This may signify that his necks are capable of extending or become distorted after passing through dimensions.

Following the destruction of Mechagodzilla City, Metphies persuaded many of the survivors of the operation that the reason Haruo Sakaki was not assimilated by the Nanometal was because of the divine intervention of God. Though Metphies and Haruo himself were aware that the medical treatment he received from Miana was the real reason he survived, the fervor of Metphies' new cult and the calls for his execution aboard the "Aratrum" prevented Haruo from making a public stand. In his absence, Metphies telepathically coordinated with Endurph aboard the Aratrum through the Garbetrium. After restraining Maina's twin sister Miana, who confronted him with his deception, Metphies staged a ritual in the Houtua village. There, he placed a ritual bead on his Garbetrium, and revealed the sacred name of God: Ghidorah. Followers both in the village and on the "Aratrum" began chanting Ghidorah's name, calling forth the "Wings of Death" to destroy Godzilla. The shadows of Ghidorah's three heads crept across the floor, dismembering the human cultists one by one.

A singularity appeared next to the Aratrum. One of Ghidorah's heads emerged from the portal and began circling the ship, causing havoc with its systems and forming a strong gravitational field around it. The Aratrum exploded, killing all aboard. As Martin Lazzari and Josh Emerson lost contact with the ship on Earth, three black vortexes opened in the sky. The two retreated to a watch tower with Haruo, Maina, and the rest of the Houtua. Realizing Metphies' role in this, Haruo left to confront him. Godzilla, who had been dormant after destroying Mechagodzilla City, was alerted by the strange occurrence and awoke. One of Ghidorah's heads emerged from a vortex and slithered towards Godzilla. He fired his atomic breath at it, but the beam seemed to inexplicably curve around Ghidorah. Their computer showed no indication of the beam curving; in fact it didn't detect Ghidorah at all - only their eyes and ears could perceive him. The Golden King lunged towards Godzilla, who swiped at him only to harmlessly phase through. Ghidorah bit down on his shoulder, completely bypassing his shield and beginning to drain his electromagnetic energy. Further gravitational disturbance was detected as two more heads emerged from the other portals in the sky and clamped down on Godzilla as well.

Haruo confronted Metphies on a hill, where he watched the battle unfold and had tied Miana to a wooden structure. After explaining his diabolical plan, Metphies turned to look at Haruo, revealing that he had replaced one of his eyes with the Garbetrium bead which was now glowing golden. Metphies stared into Haruo's eyes, triggering a telepathic vision where Haruo was at the Exif's mercy. Meanwhile, Godzilla began converting the electromagnetic energy in his body into heat, as he had done in his battle with Mechagodzilla City. Still, Ghidorah seemed completely unaffected. He continued biting down on Godzilla, gradually negating the attack. Ghidorah began to lift Godzilla into the air effortlessly, despite his incredible size. Martin realized that from Godzilla's perspective, Ghidorah was essentially an illusion, but for Ghidorah Godzilla was physically present and could be attacked. The only way for an extradimensional creature like Ghidorah to operate in this dimension was if someone was guiding it...

Martin and Maina returned to the Houtua's temple and entered the cave housing Mothra's egg. They placed their hands on it as Maina appealed to her goddess. Heeding her request, Mothra manifested inside Haruo's vision and destroyed the imaginary plane he and Metphies were flying. As Haruo fell through the sky, Maina and Martin were able to explain to him that the Garbetrium bead in Metphies' eye was acting as Ghidorah's eyes and allowing him to attack Godzilla. When he escaped from the vision, Haruo found himself holding Metphies by the head. He shattered the Garbetrium bead with his thumb, severing Metphies' connection to Ghidorah. The dragon suddenly released Godzilla, who found that he could now physically make contact with his attacker. He dissipated the first head with a swing of his tail, tore the lower jaw off the second, and dispatched the third with his atomic breath. Ghidorah was finally banished from this dimension, and for at least the time being the planet was safe from his terror. As Metphies lay dying, he told Haruo that for as long as he lived, Ghidorah would be watching him, waiting for humanity to regain its thirst for destructive technology.

Ghidorah has devoured thousands of planets through the use of Super Gravity. He demonstrated an ability to control gravity when he attacked the Aratrum, generating a strong gravitational field around the ship which allowed him to trap and crush it until it exploded. While Ghidorah could not be detected by United Earth technology, they did pick up the gravitational anomalies he produced.

Interdimensional Travel: Due to being composed of energy, Ghidorah can pass through dimensions. Extending to incredible lengths, his necks emerge from black portals. During his summoning ritual, Ghidorah manifested in this dimension as a shadow that bit down on the shadows of nearby cultists, dismembering their actual bodies.

Space-Time Distortion: When summoned into this dimension, Ghidorah can alter space-time. When he surrounded the Aratrum, he interfered with its systems, preventing them from functioning correctly. He also altered the passage of time on the ship. For instance, after the crew on the bridge received a transmission from Bilusaludo chieftain Dolu-do from the engine room, they realized the room had already been destroyed 40 seconds ago. When fighting Godzilla Earth, Ghidorah shifted space-time to make his atomic breath curve around his head or be deflected to the ground. He was also able to make his body selectively intangible, allowing Godzilla's attacks to pass through him while his own connected, even bypassing the Asymmetrically Permeable Shield.

Electrical Properties: Ghidorah can emit directed lightning bolts in his gravity fields, generate storms and trigger massive lighting strikes near his portals, and discharge electrical energy through his bites. He can also drain Godzilla Earth's electromagnetic energy and the intense heat the King of Monsters produces faster than it's generated, cooling him even as his molecules continue speeding up in defiance of this universe's laws of physics.

Ghidorah has the capacity to communicate with Exif clergy through a technology called Gematron calculation. The Exif pick up Ghidorah's messages through a device wielded by Endurph and Metphies known as the Garbetrium. Gematron calculation can be used to develop advanced artificial intelligence and carry out complex mathematical calculations, as well as provide the Exif with probabilities and even predict the future. The Garbetrium is also a key component in the ritual to summon Ghidorah.

Weaknesses: While in this dimension, Ghidorah was guided by Metphies, who replaced his own eye with a Garbetrium bead. When Haruo destroyed the bead, Ghidorah became subject to the laws of this dimension, and was thus no match for Godzilla Earth.

Calculated as possessing a total length of 20 kilometers by the filmmakers during the development of his CG model, this incarnation of Ghidorah is not only easily the largest incarnation of the character, but possibly the largest monster in the entire Godzilla franchise. The only monster which comes close to Ghidorah is Mechagodzilla City, with a diameter of 14 kilometers. Though it may actually exceed Ghidorah in terms of absolute size given the countless buildings that comprise it.

Like the 1991 and modern-type 1998 versions of the three-headed dragon, the anime Ghidorah's roar is a modified Rodan roar. Ghidorah also utters a few unique high-pitched roars, most noticeable once he loses his connection to Metphies and Godzilla becomes able to hurt him. Additionally, the Showa Ghidorah's cackling roar is used to represent Garbetrium communication, and the original Ghidorah's flying sound effect is used for when the anime version appears in silhouette through visions.

That's about it for the anime Ghidorah. Thank you for watching.