The Meat-Eater kyoryu profile is the 26th overall episode of Wikizilla's Kaiju Profiles video series and the 1st episode of Kyoryu Profiles. It was uploaded on April 15, 2018. 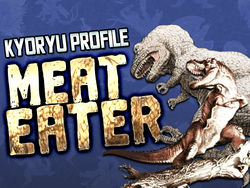 Hey kaiju fans, this is The Boy Who Cried Godzilla, and today we’re looking at everyone’s favorite almost-but-not-quite T-rex: the Skull Island Meat-Eater!

The Meat-Eater was a theropod dinosaur that debuted as one of the many horrors faced by the crew in the 1933 film “King Kong” and its corresponding novelization, released to market the film a year earlier. The creature is also included in the 2005 re-tool of the novelization, "Merian C. Cooper’s King Kong," while also making an appearance in the book’s official sequel and prequel, "Kong: King of Skull Island."

It has been debated for many years whether or not the theropod dinosaur that King Kong fought in the 1933 film was actually a Tyrannosaurus or an Allosaurus. In the film's script and novelization, it is only referred to as a "meat-eater." Director Merian C. Cooper referred to the theropod as Allosaurus, while stop-motion animators Willis O'Brien and Marcel Delgado identified it as a Tyrannosaurus.

In the 1932 novelization, the Meat-Eater is described as having a long, thin, serpentine neck and small, claw-like arms that served little purpose other than to lift food into its mouth. It moved on its sturdy hind legs in a hopping motion.

The "King Kong" film, which released the following year, gave the Meat-Eater a design reminiscent of the contemporary scientific reconstructions of the Tyrannosaurus rex, with three fingers and bumpy scales. In a similar manner to depictions of Tyrannosaurus rex and other theropod dinosaurs of the era, the Meat-Eater drags its tail along the ground, and stands with a near-upright posture. A 1989 colorized version of the film showed it to be brown in color.

In the 2005 update of the novelization, the Meat-Eater is redesigned to reflect a more modern idea of a theropod. It was now horizontally balanced with three-toed feet, a deep chest, and a thick tail that never touched the ground. Its head moved in a bobbing motion on its strong neck, and it smelled of ammonia. Despite its horizontal walking structure, the Meat-Eater could shift its balance and move its body into a more upright stance.

The Meat-Eater was designed for a film entitled "Creation" being spearheaded by Willis O'Brien before it was scrapped by RKO Pictures studio head Merian C. Cooper, who instead offered to use it and O'Brien's other models on his own project, "King Kong," due to his being so impressed with the special effects work of Willis O'Brien.

Kong’s iconic battle with the Meat Eater has been referenced in many other media starring the character. A publicity still for the 1933 film depicts Kong shoving a fallen tree down the Meat Eater’s throat. This likely inspired the famous scene in “King Kong vs. Godzilla” where Kong does the same thing to Godzilla, and in fact, early promotional images for the Toho film have Godzilla taking the place of the Meat-Eater in the same production photo. In “King Kong Escapes,” Kong battles Gorosaurus, a giant theropod dinosaur which tries to prey upon his human love interest, Susan Watson. Kong defeats Gorosaurus by breaking its jaws, just as he killed the Meat Eater. In the 1976 remake of “King Kong,” Kong fights a giant constrictor snake that threatens his human bride Dawn. Once again, Kong defeats the creature by breaking its jaws, this time in much more brutal fashion as he literally tears its jaws apart. In Peter Jackson’s 2005 “King Kong” remake, Kong does battle with three theropod dinosaurs called Vastatosaurus rex, or V-Rex, as a tribute to his battle with the Meat Eater. Kong even defeats the last V-Rex by breaking its jaws.

Jaw Strength: Due to their small arms, the Meat-Eater’s jaws are their main weapon in all of their appearances. The 2005 incarnation’s maw is said to be able to kill Kong in one bite.

Tail Strength: In the 2005 rewrite of the novelization and in its prequel, the Meat-Eater uses its tail as a weapon to knock Kong off balance with its sheer strength. In the film, the Meat-Eater can be seen using its tail more subtly to do the same thing.

Kick: In all of its appearances, the Meat-Eater’s most effective attack has been its powerful legs and the strong kick they deliver.

The Meat-Eater is simply a dinosaur who had survived alongside the other creatures of Skull Island for millions of years, having adapted to survive in the island’s unique conditions.

King Kong (1933): After spying her unattended, a Meat-Eater attacked actress Ann Darrow in a tree. While Kong attacked the Venture crew, the Meat-Eater menaced Darrow, and began to close in on the tree she was in, before Kong came to the rescue. In this iteration, the Meat-Eater quickly escaped Kong’s neck-lock before repeatedly attempting to bite the ape. Kong then leaps upon the Meat-Eater before being kicked off. The two continued to grapple for awhile before Kong managed to get on the Meat-Eater’s back, pin it down, and break its jaw, incapacitating it. A short while later, Jack Driscoll had managed to climb out of the canyon, and found the dying Meat-Eater lying on the ground.

The novelization bears a few differences. After spying Darrow, it hopped toward her out of the jungle. Kong rushed to attack in a fit of rage and he began to strangle the reptile, but it kicked him off. After calming down, Kong twisted one of the carnivore’s forelimbs until it broke, before running headlong into an ensuing kick. Kong grabbed the kicking leg before flipping the beast over and clamping his legs onto the Meat-Eater’s shoulders, breaking his jaws after.

Merian C. Cooper’s King Kong (2005): Once again, just like previous interpretations, the Meat Eater discovered Darrow high up in a tree, and extended to its full height to examine her before Kong came running. Kong beat the beast back, and it snapped it tried to retaliate, but Kong pushed the reptile over. The Meat Eater pushed Kong away with a kick before he returned and tried to attack its side again. The Meat-Eater however, turned around and stuck him with its tail. Kong grabbed the tail, and began to pound the Meat Eater’s hips mercilessly, causing one of its legs to give way and break under the weight. As the Meat-Eater attempted to get up, Kong grabbed its skull from behind and beat the reptile’s head, shattering many of its teeth. The Meat-Eater attempted to thrash Kong off to the bitter end, when he snapped its jaws.

Kong: King of Skull Island (2005): After Gaw and her vicious pack of Deathrunners slaughtered a mother and father kong and left their adolescent son for dead, a meat-eater and its offspring scavenging for food came upon the carcass of the father kong and began to eat it. Mistaking the meat eater-as being responsible for killing his parents, the young Kong attacked the dinosaur. The meat-eater managed to knock the young kong into a ravine by hitting him with its tail, then it and its offspring returned to their meal.

And that's Wikizilla's Kyoryu Profile on the Skull Island Meat-Eater. Thanks for watching!