The SpaceGodzilla kaiju profile is the 16th episode of Wikizilla's Kaiju Profiles video series. It was uploaded on July 23, 2017.

This video corresponds to SpaceGodzilla. 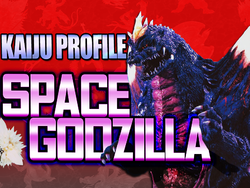 Hey kaiju fans, I'm Titanollante, and today we look at the God of Destruction: SpaceGodzilla!

SpaceGodzilla is a crystalline extraterrestrial Godzilla clone that debuted in "Godzilla vs. SpaceGodzilla." One of Godzilla's most intelligent foes in the series, SpaceGodzilla exhibits displays of planned combat strategy throughout his debut movie. This is further evidenced by the fact SpaceGodzilla sought to dominate the Earth of his own free will. Unlike Godzilla, who in the Heisei series of films is depicted as a force of nature, neither good nor evil, SpaceGodzilla appears to have an element of true malice, as according to Mothra's Cosmos, SpaceGodzilla intended to kill Godzilla so that the Earth would be defenseless when he dominated it.

SpaceGodzilla obviously looks similar to Godzilla in many ways, but his skin is navy-blue with a patch of dark reddish-purple skin on his abdomen which appears much smoother than the rest of his skin. He is considerably bulkier and taller than Godzilla. He has two massive white crystals that erupt from his shoulders, and his tail is much longer, ending with several crystal-like spikes. His dorsal plates on his back are made of similar crystals, and are white in color. As a result of his build, SpaceGodzilla has difficulty walking and he cannot run, but he makes up for this by having the ability to fly.. His arms are also extremely thin and short in comparison to the rest of his body, owing to the fact that he rarely uses them directly in favor of his telekinetic abilities. SpaceGodzilla's head is elongated and his mouth area appears similar Biollante's, as he has sharp teeth and tusks on the sides of his mouth, along with fleshy membranes on the inside of his mouth. He has fire-orange eyes and a yellow-orange crest on his forehead.

In "Godzilla vs. SpaceGodzilla," the human characters hypothesize that Godzilla cells somehow cast into space fell into a black hole and began assimilating crystalline organisms, then came out from a white hole, evolving rapidly by absorbing energy from exploding stars. It is not known for certain what caused the Godzilla cells to fall into the black hole, but it is explained in the film that either cells from Godzilla's previous clone, Biollante, (who by the way was NOT erased from history -- please watch our "Godzilla vs. King Ghidorah Time Travel Explained" video) escaped Earth's orbit when she rose into space after battling Godzilla in 1990, or that Mothra unknowingly carried the cells into space on her wings when she was going to space to deflect a meteor headed for Earth in 1993.

SpaceGodzilla was first seen flying through space, where he destroyed a manned NASA satellite. He battled M.O.G.U.E.R.A. while he was on his way to Earth, and defeated the mech. He then landed on Birth Island and attacked Little Godzilla, but Godzilla arrived to save him. SpaceGodzilla quickly overpowered Godzilla using his telekinetic skills, and then trapped Little Godzilla in crystals. He flew away and flew over Japan, eventually landing and setting up his fortress in Fukuoka. M.O.G.U.E.R.A. arrived in Fukuoka to battle SpaceGodzilla again, but was no match for the monster. Godzilla soon arrived as well and joined forces with M.O.G.U.E.R.A. M.O.G.U.E.R.A split into Land Moguera and Star Falcon. Land Moguera drilled underground and knocked out the foundations of SpaceGodzilla's power source, the Fukuoka Tower, while Godzilla toppled the tower from ground level. Godzilla then had the upper hand, and M.O.G.U.E.R.A. used its spiral grenades to destroy SpaceGodzilla's shoulder crystals. In retaliation, SpaceGodzilla blasted off one of M.O.G.U.E.R.A.'s arms, and proceeded to impale the mecha on his tail and throw it into a nearby building. Akira Yuki tried to pilot the damaged mech back into battle, colliding with SpaceGodzilla. However, the damage to the machine made it almost impossible to control, and the machine crashed into several buildings. The weakened SpaceGodzilla was about to explode, but Godzilla blasted him with his red spiral ray multiple times, also blasting and destroying M.O.G.U.E.R.A. in the process. SpaceGodzilla let out a weak roar and finally exploded into spores of light that floated back up into space.

Corona Beam: SpaceGodzilla is able to fire an energy beam from his mouth and shoulder crystals. He appears able to control the direction and movements of these energy beams, allowing them to hit his target in various ways, even bypassing potential defenses. The beam is able to visibly injure Godzilla, even knocking him to the ground in one instance, and later is used to sever one of M.O.G.U.E.R.A.'s arms.

Intelligence: SpaceGodzilla demonstrates a high degree of intelligence and strategy. Upon arriving on Earth, SpaceGodzilla immediately went after Godzilla, as he saw him as the biggest threat within his path to ensure his dominance on the planet, heading straight to Birth Island to attack Little Godzilla so as to draw out Godzilla himself.

Gravity Tornado: SpaceGodzilla possesses a form of telekinesis, being able to float or transport other kaiju through the air. Though he cannot move his targets with great speed, Godzilla was completely unable to break free of his psychic grip.

Energy Manipulation: SpaceGodzilla is able to manipulate energy at will. In addition to the aforementioned corona beams, he is able to conduct energy through touch, allowing him to stand a better chance when facing a foe in close combat. His shoulder crystals' main function is to replenish the space monster's strength by drawing on earthbound cosmic energy and other nearby sources. He can also produce an aura that can cause electrical disturbances.

Geokinesis: SpaceGodzilla can grow crystals from the ground for offensive or defensive use. SpaceGodzilla is also able to combine this power with his energy manipulation to provide him with a source of energy.

Photon Shield: SpaceGodzilla can generate a crystal-like shield at will to dissipate or even reflect energy beams, although he only used this ability against Godzilla.

Homing Ghost: SpaceGodzilla can raise crystals out of the ground and propel them at an opponent. Their quantity makes them hard to dodge, though they travel at a slow pace.

Photon Hurricane: While in his flying form, SpaceGodzilla can emit a ring-shaped electromagnetic wave which disrupts electrical instruments.

Physical Strength: While much of SpaceGodzilla's strength is limited due to his size and build, he was able to lift and throw M.O.G.U.E.R.A. several hundred meters after impaling it with his tail. He was also able to hold his own against Godzilla for a time while battling him up close.

An early version of SpaceGodzilla, called "AstroGodzilla" according to G-FAN issue 105, would have led an army of giant alien dragonflies that he would have sent to Birth Island to attack Little Godzilla. Godzilla would have teamed up with M.O.G.U.E.R.A. and Mothra to defeat him.

SpaceGodzilla's design is a modified version of Super Godzilla, the transformation of Godzilla found in the Super Nintendo game of the same name. Minoru Yoshida designed the concepts for both monsters, originally creating Super Godzilla for the game, but later recycling the look and tweaking it into SpaceGodzilla's final design.

"A Space Godzilla" was the title of an unmade Godzilla film from the 1970’s that was considered after Terror of Mechagodzilla, but had been scrapped and was instead turned into an illustrated short story. This bizarre story began with the discovery of a female alien Godzilla named Rozan, who was dying from diabetes while pregnant with her son Lilin. Human scientists converted Rozan’s body into a spaceship, allowing her to carry Lilin to Godzilla Planet, where he fought alongside his father Kunin to battle the evil Sunerian aliens and their leader Gamoni. Aside from the title, this project has nothing to do with SpaceGodzilla.

Early versions of the script for "Godzilla vs. SpaceGodzilla" called for SpaceGodzilla to face Godzilla and a second Mechagodzilla, a plan scrapped when it was thought that SpaceGodzilla fighting against the combined might of Godzilla and the machine which nearly killed him the previous year would make the battle too one-sided. Instead, the less-powerful Moguera was revived and updated for this purpose. Although, "Godzilla: The Half-Century War" seems to pay homage to this idea in issue #4.

That's all we have for SpaceGodzilla. Thanks for watching, subscribe for more, and we'll see you next time!