The Titanosaurus kaiju profile is the 4th episode of Wikizilla's Kaiju Profiles video series. It was uploaded on February 11, 2017.

This video corresponds to Titanosaurus. 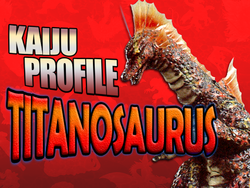 Titanosaurus was created by Yukiko Takayama, Ishiro Honda, and Teruyoshi Nakano, and debuted in Toho's 1975 Terror of Mechagodzilla. He stands 60 meters tall and weighs 30,000 metric tons.

Titanosaurus is primarily red with bulbous, black spots covering its body. It has three toes on each foot, and three fingers on each hand. Titanosaurus also sports yellow and orange fins on its head and back, and another fan-like fin on its tail that it can open and close at will, as well as two smaller fins on the side of its head. Titanosaurus has a long snout, small, yellow eyes with slit pupils, and a pair of antennae on its head.

Unlike Godzilla, Titanosaurus is a peaceful Pacific-based amphibious dinosaur, and lived on the bottom of the ocean. It was not in Titanosaurus' nature to attack, but eventually, Dr. Shinzo Mafune discovered a way to control the dinosaur to do his bidding.

In Godzilla: The Game's Kaiju Guide, Mafune's control over Titanosaurus is attributed to a device implanted in the monster's head.

Titanosaurus survived the extinction of the rest of the dinosaurs, and eventually settled at the bottom of Osagawa bay where he was discovered by Dr. Shinzo Mafune who had researched controlling the minds of animals to no success. His discovery of Titanosaurus was deemed so preposterous that he was laughed out of the scientific community and that caused him to begin to try and extend his control over the dinosaur. He worked on his method for the next fifteen years, and after Godzilla's defeat of the original Mechagodzilla he was contacted by the natives of Black Hole Planet 3 who helped him to finally gain control over Titanosaurus. Titanosaurus was used to destroy a submarine that had come to scavenge the remains of Mechagodzilla, whom the Aliens had been rebuilding. They asked Mafune to hand them his control device so that both it and Titanosaurus could exact Mafune’s revenge on the human race, which he agreed to.

Shortly after, another submarine was sent out in order to find and study Titanosaurus, but due to it being in control of Mafune, it attacked it immediately. The submarine went unharmed however, because of the Supersonic sound waves produced by the submarine's radio transmitters interfered with Titanosaurus' mind control and left it in immense pain. The International Police then took those findings and turned them into a weapon.

Despite his daughter Katsura, who had been naturally close with Titanosaurus, begging him not to turn him into another monster of destruction like Manda, Ghidorah, and Rodan, Dr. Mafune sent Titanosaurus to attack after having the Super Sonic gun sabotaged.

While attacking the city, the military sent planes and tanks to defeat Titanosaurus, but he was completely unfazed by them. His rampage continued, until he was knocked down by Godzilla's Atomic Ray. The monsters began to fight, but Titanosaurus retreated when Katsura was injured.

Titanosaurus was then sent back into the city with the fully rebuilt Mechagodzilla 2 to begin fulfilling the Aliens plans of eliminating the human race to turn the planet into a colony of their own planet. They began to destroy the city, but were distracted by Godzilla who came to challenge them. Titanosaurus used his fan-like tail fin to try and blow Godzilla away, and while he fought the gust of wind Titanosaurus created, Mechagodzilla 2 shot him down, which allowed Titanosaurus to blow Godzilla away because he could not fight the wind. The monsters then continued to fight until they had defeated Godzilla. At that time, the military had repaired their Sonic Wave Gun and used it to incapacitate Titanosaurus. While he was unable to fight, Godzilla defeated Mechagodzilla 2, whose control facility had been destroyed, and by consequence so had Titanosaurus's, and then finally defeated him and allowed him to fall back into the ocean.

Tail: Titanosaurus can generate large gale-force winds (or a whirlpool, if underwater) by swinging his tail fan. These winds can reach up to 320 meters per second, according to Titanosaurus's Kaiju Guide entry from the PlayStation Godzilla game, and can blow away Godzilla with ease.

Physical Strength: The dinosaur monster possesses normous physical strength, sufficient to lift the 20,000-metric ton Godzilla off the ground with a bite and send him flying with a kick.

Amphibiousness: Titanosaurus is capable of breathing on land, and in water.

Durability: Titanosaurus can withstand most conventional weapons, and even explosions at point blank range

Sonic Wave Emission: In the video game Godzilla: Unleashed Titanosaurus is ironically capable of emitting Sonic Waves from his mouth, despite sonic waves being his weakness.

Weaknesses: Sonic waves cause Titanosaurus to become confused and cause the dinosaur immense pain.

Titanosaurus's roars are modified from the Ultraman Ace kaiju, Brocken.

Titanosaurus's roar is reused for the video game exclusive kaiju Barugaron, from Godzilla: Trading Battle. They were also reused for the Crocomire and Phantoon bosses of the Metroid series.

In an earlier version of Terror of Mechagodzilla, screenwriter Yukiko Takayama stated that in place of Titanosaurus, Godzilla would have fought two dinosaurs named the Titans. These dinosaurs would normally be peaceful but would become very violent when their necks wreathed together. The dinosaurs were dubbed “Titan I” and “Titan II.”

In Terror of Mechagodzilla, Titanosaurus is always referred to as a kyoryu (or dinosaur), rather than as a kaiju. Yukiko Takayama made it clear in a 2010 G-FAN Spring interview that this was the case because, "Titanosaurus was... originally a very quiet, friendly dinosaur. He survived deep in the sea, but Dr. Mafune did something to him, and then he became violent. That is why he is not a 'kaiju' but a 'kyoryu.'"

That was Wikizilla's Kaiju Profile on Titanosaurus. Thank you all for watching, and I'll see you next time!