Godzilla vs. King Ghidorah Time Travel Explained is the 2nd episode of Wikizilla's Kaiju Facts video series. It was uploaded on November 6, 2016.

This video corresponds to the time travel plot of Godzilla vs. King Ghidorah. 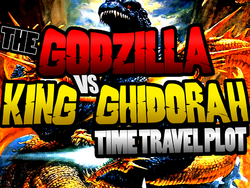 Hey kaiju fans. Today, we’re tackling the most confusing thing in the Godzilla series: the time travel plot from Godzilla vs. King Ghidorah.

To start things off, I’ll detail what the Futurians, the 23rd century humans behind this whole thing, believed they were doing:

In 1954, the Castle Bravo H-Bomb test irradiated and awakened the first Godzilla, who attacked Tokyo and was killed by the Oxygen Destroyer, which would later give rise to Destoroyah. This Godzilla was not at all affected by the actions of the Futurians.

This Godzilla lived and presumably slept underwater near Daikoku Island until 1984, when a volcanic eruption woke him up. This is where the events of Godzilla 1984 and Godzilla vs. Biollante happen. These 2 movies were not erased from history.

In Godzilla vs. Biollante, the point is made that when Godzilla moves unexpectedly, the JSDF will be unable to track him. This is shown when Godzilla is expected to surface in Ise Bay, but instead shows up in Osaka Bay, catching the JSDF completely off-guard. This is going to be important soon.

So, after Godzilla vs. Biollante, Godzilla returns to the ocean, infected by the Anti-Nuclear Energy Bacteria [ANEB], and stays immobile for a few years.

When they come back after the Futurians had moved Godzilla, Godzilla is no longer in that spot, so everyone assumes Godzilla has been erased from history, even though everyone still remembers him. Some fans take the Futurians’ claim that Godzilla has completely vanished at face value and assume he was in fact erased from history. However, this is not true, and further observation of the film’s events should make this clear. Due to King Ghidorah’s appearance and Godzilla’s seeming absence (which confirms to the characters in the movie that the Futurians did erase Godzilla from history and move him to the Bering Sea), the government is desperate to stop King Ghidorah, so they panic and allow Yasuaki Shindo to send a nuclear submarine to the Bering Sea so it can irradiate the Godzillasaurus they THINK is there and turn it into Godzilla.

Godzilla, weak and infected by the ANEB, finds the sub and feeds on it, curing his ANEB infection and making him grow 15 more meters in height. And of course, the reason that everyone thought that Godzilla was now a Godzillasaurus in the Bering Sea was because Godzilla decided to move, and the JSDF completely lost track of him, like I mentioned before. They thought he disappeared, but he just moved. Miki Saegusa even sensed Godzilla moving through the ocean around that time.

All of this is supported in later films, because the events of previous films are explicitly referenced. Godzilla vs. SpaceGodzilla mentions Biollante [one of the theories about SpaceGodzilla’s creation is Biollante going up into the sky], and Godzilla vs. Destoroyah mentions the Oxygen Destroyer and explicitly states that the 1954 Godzilla was a different monster than the Heisei Godzilla.

So, to summarize, the real point of the whole thing is that the Futurians did not change the timeline, and actually created the Heisei Godzilla. In essence, the Futurians were idiots and believed the 1954 and Heisei Godzillas were the same creature and were both the dinosaur from Lagos. Hence why they thought moving that Godzillasaurus would somehow erase Godzilla from history.

I hope that cleared the whole thing up for everyone. It’s pretty confusing, but we’ve tried to make it as simple as possible. Anyways, that was the Godzilla vs. King Ghidorah time travel plot explained. Thank you for watching, I’ll see ya next time.