The Skeleturtle kaiju profile is the 7th episode of Wikizilla's Kaiju Profiles video series. It was uploaded on April 1, 2017.

This video corresponds to Skeleturtle. 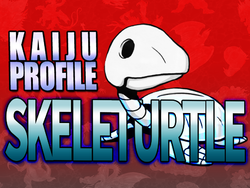 Hello kaiju fans, it’s me, Titanollante, and today we’re going to be talking about a fan-favorite kaiju… Skeleturtle!!

The Mystery Bones of Infant Island, (as named in a Cast ornament figure released in 2012), more commonly known by its fanmade nickname Skeleturtle, is a small skeleton-like turtle creature that appears briefly in “Mothra vs. Godzilla” in the background. Unlike other skeletal remains that never garner a lot of fan love, Skeleturtle is actually seen moving AND BLINKING, suggesting he is a living creature.

Skeleturtle has had an officially licensed T-shirt released of him, and also makes an appearance in the inner front and back covers of “Shinji Nishikawa: Drawing Book of Godzilla,” in addition to his Cast ornament and his official media appearances.

Skeleturtle is purely white and gray, with black eyes, and a bland, pale shell with no visible scutes. It has a fairly long neck, and very short limbs, which have tiny bone fragments visible.

[ ORIGINS ] Within the context of “Mothra vs. Godzilla,” Skeleturtle's direct origins are unknown. It is possible that it was a species of turtle affected by the atomic radiation contaminating Infant Island.

Skeleturtle made a very short appearance on “Mothra vs. Godzilla,” lasting only about 38 seconds on screen and in the background. It was found on Infant Island, which had a lot of radiation and lifeless skeletons lying around. None of the characters ever directly interact with or notice it.

Perhaps more notably, Skeleturtle actually makes a physical appearance in “Godzilla: Rulers of Earth” #19, where he is seen running away from Mothra and Battra’s battle on Infant Island.

Skeleturtle's inclusion in “Mothra vs. Godzilla” may be a reference to a popular 1962 Italian documentary entitled Mondo Cane (It's a Dog's World). The film contains a large number of documented atrocities to nature and animals, including turtles on the radiation-contaminated Bikini Atoll beaches, many of which were dead or dying from the continued fallout from nuclear tests. The dried bones of the turtles move in the wind, which is reflected in Skeleturtle's movement in the film.

That’s all we have for the Mystery Bones of Infant Island. Thank you and see you next time!