The Biollante kaiju profile is the 11th episode of Wikizilla's Kaiju Profiles video series. It was uploaded on April 17, 2017.

This video corresponds to Biollante. 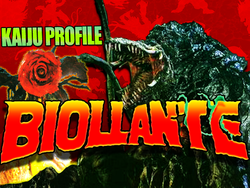 Hey kaiju fans, Titanollante here, with an overview on the first new major monster of the Heisei series: Biollante!

Biollante is a tribrid kaiju made from the DNA of a human, a rose, and Godzilla created by Kazuki Omori and Shinichiro Kobayashi that debuted in 1989’s Godzilla vs. Biollante. In her rose form, Biollante stands 85 meters tall and weighs from 60,000 to 100,000 metric tons. She stands 120 meters tall with a weight of 200,000 metric tons in her final form.

Biollante’s first form resembles a giant rose with a set of uneven sharp teeth at the center. She has countless vines with small mouths on the ends of them, and a glowing orange or orange-red meat sac located on her lower body. The fleshy sac, referred to as a “nucleus,” has many wrinkles and lines, resembling a brain.

Her second form takes on more Godzilla-like traits, such as her crocodilian head and a mouth lined with many rows of teeth, paired with sharp tusks growing on the sides of her mouth. She has more vines than her first form, and maintains her orange sac. She has rough skin and four stubby, root-like appendages.

Biollante was originally a human-and-rose hybrid genetically engineered in 1984 by Dr. Genshiro Shiragami by splicing together the DNA of his daughter, Erika Shiragami, with that of a rosebush, and later on with Godzilla cells.

Godzilla vs. Biollante (1989): While working in the Middle-Eastern nation of Saradia to genetically engineer a new type of plant that could survive in the Saradian deserts in order for the country to become less reliant on oil exports, a rival American company destroyed the laboratory holding some scavenged Godzilla cells from his 1984 attack, which were to be used in the new plant, killing Erika in the process. Shiragami, in an attempt to sort of resurrect his daughter, spliced some of her cells with a rosebush.

In 1990, the resulting earthquake from Mount Mihara’s eruption killed several of his spliced roses, sending the doctor into a panic and making him splice G-cells into a single rose so that it would become invincible. As a result, Shiragami’s tribrid eventually became sentient, the Godzilla cells becoming an overpowering influence, and continued to grow until she became of interest to Godzilla. Still, Erika’s consciousness survived within Biollante, though faintly.

After gaining sentience following Dr. Shiragami’s splicing of G-cells into the hybrid, Biollante attacked two Bio-Major agents that broke into Dr. Shiragami’s lab on the shore of Lake Ashi. Biollante then ran out into the lake to grow, with her wailing cries drawing Godzilla to her. She battled Godzilla in her rose form but she was overpowered. Biollante broke apart into spores of energy and floated away.

Later on, Biollante reformed in her Godzilla-like final form and continued fighting Godzilla. After a long, evenly-matched battle, Godzilla managed to badly wound Biollante with his Atomic Breath after firing it directly into the back of her mouth. Biollante broke apart into spores of energy again and flew into space, images of Erika and a giant rose becoming visible floating above the earth.

Tendrils: Biollante possesses tendrils that resemble spears and are capable of piercing through Godzilla’s skin with relative ease plus constrict and grapple objects or creatures, as well as mouthed vines. Biollante uses the stubby, root-like bases of her four main tendrils to move across the ground.

Acid Sap: Biollante is capable of spitting a powerful corrosive radioactive sap from her mouth.

Energy Spores: Biollante is capable of breaking into a cloud of spores when she is severely wounded and move through the air. She used this to survive both of her fights against Godzilla.

Regeneration: Thanks to possessing Godzilla DNA, Biollante has extreme regenerative abilities. This ability is shown when she seemingly completely regenerated part of her head after it had been blown off by Godzilla’s atomic ray [though this may just be a continuity error]. According to Dr. Shiragami, Biollante is completely immortal and cannot die, due to both her regenerative capacity and ability to break apart into energy spores when wounded.

Tunneling: Biollante can submerge her vines and tendrils and then have them rise up from the ground further away from her in a surprise attack. This ability is seen specifically in the PS3 and PS4 “Godzilla” video game as well as in the IDW comic series “Godzilla: Cataclysm.” In “Godzilla: Unleashed,” Biollante has the ability to submerge her entire body underground and tunnel around, surfacing to overwhelm foes.

Weaknesses: In Biollante's rose form, her cellular division is abnormally affected by Godzilla's atomic ray, resulting negatively in heavy body damage. Direct blasts from the atomic breath inside of her also can prove catastrophic, as with her final battle against Godzilla.

Biollante is the only monster in the Heisei series that Godzilla faces who is unable to fly in any capacity.

Both Biollante’s first and final forms were portrayed from the inside by suit actor Takegami Akio. Also, the final form was additionally controlled by a crew of 20 people who manipulated 32 piano wires to mobilize the beast.

In the 1992 manga, “The Godzilla Comic Raids Again,” in one of the stories in the manga and one of Biollante’s strangest appearances, a group of Xiliens unleash King Ghidorah to try to take over the Earth. King Ghidorah begins to fly to Earth but is stopped by Biollante who is living in space debris. During the battle between them, King Ghidorah strikes Biollante with his gravity beams. Biollante absorbs the essence of its power and then becomes a plant-like King Ghidorah clone. Even with Biollante's enhancements, it is still defeated. A new Biollante called “Neo Biollante” also makes an appearance in the Kodansha manga, “Godzilla, King of the Monsters,” where she is created by Dr. Oniyama. The monster ‘King Godzilla,’ an amalgamation of Godzilla, King Ghidorah and Battra from the second volume of the Kodansha manga can also transform his chest into a Biollante head.

Biollante was intended to appear in Atari’s 2004 fighting game “Godzilla: Save the Earth,” but was scrapped at the last minute due to licensing issues. A fully functional, playable Biollante is present in the game’s data with a complete moveset and everything. She was however, made playable in Wii version of the sequel “Godzilla: Unleashed.”

That’s our episode on Biollante. Thanks again for watching, subscribe for more, and we hope to see you next time!