The Toho King Kong kaiju profile is the 8th episode of Wikizilla's Kaiju Profiles video series. It was uploaded on April 2, 2017.

This video corresponds to Toho's 1962 and 1967 incarnations of King Kong. 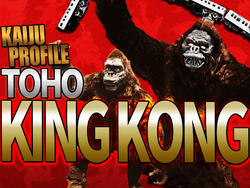 Toho’s iteration of King Kong was devised by Ishiro Honda, Shinichi Sekizawa, and Takeshi Kimura, based on Merian C. Cooper’s 1933 monster of the same name, and debuted in Toho’s 1962 film “King Kong vs. Godzilla.” He stood 45 meters tall and weighed 20,500 metric tons, while the second Toho Kong, appearing in 1967’s “King Kong Escapes,” was 20 meters in height and 10,000 metric tons in weight. For comparison, the 2005 King Kong stood at 7.62 meters and the Legendary Kong (at least during the events of “Kong: Skull Island”) stands at 31.6 meters.

Toho’s Kong is bipedal with long arms. He has grey, mottled skin, and dark brown hair covering most of his body except for his hands, feet, face, and pectoral muscles. He has a single set of pointed teeth, and small ears. The “King Kong Escapes” design looks similar to the King Kong vs. Godzilla suit, the most noticeable difference being their heads -- the latter suit’s is bigger, with a bigger mouth and eyes and a shorter neck. This Kong’s arms are longer, and more hair covers the hands. Its legs are somewhat shorter, but the feet show no considerable difference.

While his origin is left somewhat ambiguous, Kong was worshipped by the natives of Farou Island, who fed him a type of berry known as Farolacton (Soma in the American version) in order to sedate him when he came to their village. In King Kong Escapes, Kong lived on Mondo Island, where he was worshipped by the islanders there as well.

King Kong vs. Godzilla: In King Kong vs. Godzilla, After being incapacitated with Farolacton juice in celebration by the natives of Farou Island for a victory against a Giant Octopus, Kong was kidnapped by an expedition party sent to capture him to combat the popularity of Godzilla’s most recent attack in the media. Kong was fastened to a raft and was trailed behind a boat bound for Japan, but awoke en route and escaped. After reaching Japan, Kong came across Godzilla who attacked him, causing Kong to retreat. After their first encounter, the J.S.D.F. set up high tension wires around Tokyo, which successfully repelled Godzilla but only made Kong stronger. Kong strode into the city, picked up a woman named Fumiko while attacking a train, and climbed up the National Diet Building. Unable to fire on him without endangering Fumiko, the J.S.D.F. detonated capsules full of Farolacton around Kong to impair him. Once he had collapsed in front of the Diet, soldiers tethered him to balloons in order to float him to Mount Fuji, where Godzilla was roaming, in the hopes that they would kill each other. They fought fiercely, but Godzilla gained the upper hand, half-burying Kong under rocks and setting the forest around him ablaze. With Kong dazed and almost unconscious, Godzilla taunted Kong and prepared to walk back down the mountain. Suddenly, a well-timed electrical storm gave Kong a second wind and an electrified grip. Their battle resumed, with Kong now possessing the strength necessary to fight Godzilla all the way down the mountain. After battling their way through the countryside at the foot of the mountain, demolishing Atami Castle along the way, the two monsters fell off a cliff and into the ocean. Kong was the only one to surface, and began to swim away.

King Kong Escapes: King Kong’s next appearance in a Toho film was in King Kong Escapes. This is a different King Kong, less than half the size of the 1962 King Kong. Though a Gorosaurus would appear in Destroy All Monsters, he does not exist in the same continuity as the Kong who fought Godzilla.

After noticing the theropod Gorosaurus menacing Susan Watson, a lieutenant on a United Nations submarine undergoing repairs near Mondo Island, Kong left his cave to defend her. During the fight, Watson fled with the rest of her expedition party, and Kong followed their hovercraft into the shallows surrounding his island. There they were attacked by a Giant Sea Serpent, which Kong also defeated before beginning to shake the submarine in hopes that Susan would come back. After she explained to Kong that they had to leave him, he let the vessel go. Shortly thereafter, he was gassed by helicopters under the command of the scientist Dr. Who, who wanted to use Kong to mine Element X in the Arctic, as his own invention, Mechani-kong, was unable to cope with the radiation.

In order to control Kong, Dr. Who kidnapped Susan Watson and two of her shipmates, however instead of allowing Kong to be controlled through them, they freed Kong, who then escaped into the ocean. As a consequence, Susan was loaded onto one of Dr. Who’s ships to try and get the gorilla back under control.

After Kong reached Tokyo, Dr. Who released Mechani-Kong in the city. In an attempt to gain leverage over Kong, Mechani-Kong grabbed Susan and climbed Tokyo Tower where Dr. Who threatened to drop her if Kong did not back down. Instead, Kong climbed up the tower to save her. Mechani-Kong dropped Susan, but she was saved by her teammate Jiro Nomura before a defector on Dr. Who’s ship destroyed Mechani-Kong’s control module, sending the robot plummeting into the street blow. Susan then begged Kong to stop Who’s ship, which was leaving the harbor. Kong sank the ship and then began swimming back to Mondo Island.

Physical Strength: Kong possesses immense physical strength, able to swing Godzilla by the tail or throw him over his shoulder with ease.

Electric Conductivity: In King Kong vs. Godzilla, Kong has the ability to store and redistribute electrical currents that pass through his body through touch.

Radiation Resistance: In King Kong Escapes, Kong is unaffected by the radiation given off by Element X.

The battles in King Kong vs. Godzilla were choreographed by suit actors Shoichi Hirose (as Kong) and Haruo Nakajima (as Godzilla), who patterned them after pro wrestling. Incredibly, Hirose performed Kong’s shoulder flip of Godzilla without the aid of wires.

Both Kong suits had built-in arm extensions to achieve a more gorilla-like appearance.

The Toho King Kong’s roars ended up being reused for multiple kaiju long after Toho lost the rights to Kong, including King Caesar, the T-Rex from The Last Dinosaur (whose roars were also mixed with Godzilla’s), Gabora from the original Ultraman, and Gudon from The Return of Ultraman.

Like a number of Toho props, the King Kong vs. Godzilla Kong suit was later used by Tsuburaya Productions. After a facelift, it became the giant monkey kaiju Goro in an episode of Ultra Q.

The 1966 film Ebirah, Horror of the Deep was originally planned as an adaptation of the Rankin-Bass cartoon The King Kong Show, titled Operation Robinson Crusoe: King Kong vs. Ebirah. Rankin-Bass rejected the script on the grounds that it bore little resemblance to the show. Undaunted, Toho fitted Godzilla into Kong’s role; as a result, he displays several Kong-like traits throughout the film, such as his revival by lightning and fascination with Kumi Mizuno’s character Daiyo.

In Toho’s 1973 television series Go! Greenman, the Kong suit from King Kong Escapes appeared under the name “Gorilla,” as Toho no longer had the rights to the character. Gorilla was created by the Demon Tonchiki to collect the blood of children to resurrect the Demon King Maoh. Gorilla competed unsuccessfully in a Sumo match against Greenman. The suit no longer contained the poles necessary for the actor inside to operate its elongated arms; as a result, Gorilla’s hands have a tendency to flop around.

Toho pondered a King Kong vs. Godzilla remake for release in 1991, but was unable to acquire the rights to the character from Turner Entertainment. Toho’s second proposal, in which Godzilla would face an updated Mechani-Kong, was equally unsuccessful.

And that’s Wikizilla’s Kaiju Profile on Toho’s King Kong. Thank you all for watching, and I’ll see you next time!