The 2017 King Kong kaiju profile is the 13th episode of Wikizilla's Kaiju Profiles video series. It was uploaded on May 16, 2017.

This video corresponds to the Kong: Skull Island King Kong. 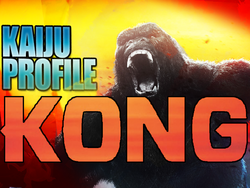 Hey there Kaiju fans, this is The Boy Who Cried Godzilla and today we’re going to take a look at the MonsterVerse’s rendition of King Kong.

This incarnation of Kong was created by Jordan Vogt-Roberts, Max Borenstein, John Gatins, Dan Gilroy, and Derek Connolly, based on Merian C. Cooper’s 1933 monster of the same name, and debuted in Legendary Pictures’ 2017 film “Kong: Skull Island." He stands 31.6 meters (or 104 feet) tall, and weighs 158 tons. The Legendary Kong, in this film, is mentioned to still be young and growing, meaning he's not at his full size yet and still has the potential to grow way larger. Compared to the other incarnations of King Kong, the Legendary Kong is the tallest American King Kong in film as of 2017, and the second tallest in film overall, behind the 1962 King Kong.

The MonsterVerse Kong sports longer legs than a real gorilla, and stands more like a human by consequence. He has gray skin with a long scar crossing diagonally down his chest, and prominent canine teeth. Most of Kong’s body is covered in short, matted, brown hair, save for his face, chest, hands and feet, and two small ears, with one missing a small portion of flesh.

Kong was a member of a species of giant hominids living on Skull Island, along with his parents until they were killed by Skullcrawlers, leaving Kong orphaned. While still a juvenile, Kong took to protecting the indigenous Iwi people on the island to protect them from the Skullcrawlers.

After assuming the role of guardian and god to the Iwi people while still not yet fully grown, Kong made it his purpose to protect the island from the Skullcrawlers that lived below the surface.

Some time into his reign in 1944, Kong discovered two World War Two soldiers fighting on Skull Island. They managed to survive the encounter and came to live with the Iwis under Kong’s protection. 29 years later in 1973, a Monarch expedition dropped seismic charges onto the island meant to flush out whatever M.U.T.O.s--Massive Unidentified Terrestrial Organisms--were living on the mysterious island, awakening the Skullcrawlers in the caves below. Kong responded by destroying all of their helicopters before heading off to treat his wounds. The loss of his men at Kong’s hands greatly angered Lt. Colonel Preston Packard, and he then began to plan how to destroy Kong. Kong later encountered journalist Mason Weaver while she was trying to free a trapped Sker Buffalo. Kong helped her to lift off the downed helicopter That was pinning it down, and left her there as wandered back to the jungle. Kong and Weaver crossed paths again later after Kong survived an encounter with more Skullcrawlers and some Leafwings. Kong noticed Weaver standing with fellow castaway James Conrad, and allowed her to touch his face before being distracted by explosions in the distance that Weaver and Conrad knew were part of a trap set by Packard.

When Kong reached the source of the explosions he noticed Packard across a lake and he began to cross the water to attack. The Lt. Colonel then ignited the Napalm in the water and Kong was badly injured by the jellied gasoline igniting on his body. Packard then prepared to set off seismic charges to finish Kong off, but stalled at gunpoint by Weaver and Conrad. Packard still fully intended to detonate the charges and to take himself with Kong in the explosion, but was kept from it by the emergence of a gigantic Skullcrawler called “The Big One”, or the Skull Devil in the novelisation, from under the water.

Packard was the only human that did not flee the new threat that Kong had kept underground by his mere presence for untold years, and as Kong got up to fight it, he smashed Packard into the ground with his fist. The next morning, as the remaining humans reached their extraction point, the Big One surfaced again to prevent them from reaching their goal. Kong battled it to buy them time, but became entangled in chains from a nearby shipwreck. Weaver then fired a flare into the Skullcrawler’s eye to draw it away from Kong, and he managed to break free.

The chain on his arm tore off one of the ship’s propellers as he broke away, and he was able to use it as a flail against the Big One. After using the propeller to deliver a blow to the Skullcrawler’s throat, the cliff Weaver was standing on began to crumble and Kong saved her from the waters below and gazed at her in his hand long enough for the Big One to bite Kong’s shoulder. While keeping Weaver away from the Skullcrawler, it was able to swallow Kong’s free fist, but mustering all of his strength Kong was able to pull out his hand, along with the Big One’s internal organs. Kong then watched in triumph as Weaver and the rest of the survivors were rescued from his island.

As of 1995, in the comic series Skull Island: The Birth of Kong, Kong is shown to still be alive and well on Skull Island. After the 1973 incident, Skull Island’s existence had been classified by Monarch, and they entrusted Kong to protect it without human influence.

Physical Strength: The Legendary King Kong is rather strong, being able to very effortlessly crush UH-1 Iroquois under the weight of his hands, pick up heavy objects, and rip the Skull Devil's innards out from his body entirely, plus fling a ship's propellor flail with incredible might.

Durability: Kong can withstand various serious injuries ranging from a shredded bicep from helicopter blades, to having his entire body doused in napalm, and still be up to fighting in relatively short amounts of time.

Sapience and Dexterity: Kong has shown remarkable intelligence known to primates in the ability to make and use primitive tools through his development of a ship’s propellor flail.

Kong was realized primarily through key-frame animation, although Toby Kebbell and Terry Notary performed in a facial capture session and movement capture session, respectively. Terry Notary, curiously, is actually credited on the poster for "Kong: Skull Island" -- a very rare occasion for a motion capture actor to receive top billing in a major film's poster.

Supervising sound editor and sound designer Al Nelson used sounds from lions, gorillas, and monkeys as bases for Kong's roar. The use of lions was inspired by sound editor Murray Spivak's work on the original film.

When designing King Kong, the designers looked to the Kong from the original film as a reference. Director John Vogt-Roberts has said that designing and creating Kong was a huge part of the movie, and has stated that Kong's design was meant to be 'hopefully iconic' so that a third grader could draw the shape and it be recognizable. In addition, he said that he and his team of filmmakers intentionally tried to make this Kong's design different from the 2005 Peter Jackson one, to show that it was its own species and that it would have its own 'set of rules.' There's much more that went into the design behind the 2017 King Kong, and we might go into his design process soon.

During the film's final battle, Kong appears to attempt to pry open and break the giant Skullcrawler's jaws. This is a reference to Kong's preferred tactic of breaking an opponent's jaws, which he demonstrates in the original film, "King Kong Escapes," and the 1976 and 2005 remakes.

According to Vogt-Roberts, the first script of the film that he read took place in 1917. Vogt-Roberts later conceived the idea of setting the film during the Vietnam War. When he pitched the idea to Legendary, Vogt-Roberts told Empire magazine that he thought Legendary would "laugh [him] out of the room," but to his surprise Legendary liked the idea and the setting was changed. Max Borenstein's script also gave the expedition to Skull Island a different motive: the brother of Tom Hiddleston's character was marooned there while searching for a 'Titan Serum' capable of curing all disease.

Also, one last interesting tidbit. A gigantic approximately $44,000 dollar ($AUD60,000) animatronic made for the Vietnamese premiere of "Kong: Skull Island" at Ho Chi Minh went up in flames during premiere night. After 15 minutes of panic, firefighters extinguished the fire.

That is all there is to know about the Legendary King Kong, at least until “Skull Island: The Birth of Kong” wraps up and “Godzilla vs. Kong” releases. More on that as it develops. Anyway, thank you for watching, and we’ll catch you later!