The Vastatosaurus rex kaiju profile is the 14th episode of Wikizilla's Kaiju Profiles video series. It was uploaded on June 13, 2017.

This video corresponds to the Vastatosaurus rex species. 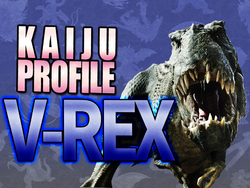 Hey there, kaiju fans, this is The Boy Who Cried Godzilla, and today we’re talking about the Vastatosaurus rex!

The Vastatosaurus was created by Peter Jackson, Greg Broadmore and Christian Pearce, and debuted in Universal’s 2005 film "King Kong." They measure 12 to 15 meters from snout to tail, and were designed, not as realistic dinosaurs, but as the most terrifying monster that Kong could fight.

The name "Vastatosaurus rex" means "ravager lizard king," derived from the Latin word vastato, which is a conjugation of the word vasto meaning to "devastate, ravage, or to lay waste." The word saurus is derived from the ancient Greek word sauros, meaning "lizard," and finally, rex is a Latin word meaning "king."

In universe, during the 2005 prequel to the film, King Kong: The Island of the Skull, a sailor named Sam Kelley, who was trapped on Skull Island named the Vastatosaurus “V. rex”, after noticing that it was too large and ferocious to be a Tyrannosaurus.

Vastatosaurus are primarily dark blue in color with tan underbellies, deep orange eyes and a single row of uneven teeth in their mouths. Unlike their tyrannosaurus ancestors, Vastatosaurus have three clawed digits on their hands, and are covered in rough, pronounced, crocodilian scales. In order to better wind through the dense jungles of Skull Island at high speeds, the Vastatosaurus developed a waist and hip bones. Male Vastatosaurus develop small crests on their heads and are typically more muscular than females.

In Designer Greg Broadmore’s words, “We worked on making the eyes scary and making it nasty and smelly—which is a recurring theme in the movie!”

"To put crocodile scales on a dinosaur is ludicrous, but it makes it look cooler and gives it an older-fashioned Ray Harryhausen-esque look."

The Vastatosaurus rex is the result of a population of Tyrannosaurus rex continuing to evolve in isolation on Skull Island over millions of years. The V-rexes appeared primarily in fight scenes in both the film and its prequel novel "King Kong: The Island of the Skull."

The Vastatosaurus population continued to live on the island, and a family group of a male, female, and a juvenile, attacked Kong on his way through the jungle in an attempt to eat Ann Darrow, whom one of the V-rexes had unwittingly saved from being eaten by a Foetodon by eating the gargantuan crocodile before it could eat her. The V. rex gave chase and was quickly joined by another member of its species before Kong intervened and a third V. rex came to their aid. Kong crushed the juvenile’s head with a boulder, and fell into a ravine while fighting the other two. While the thick vines ensnared the monsters and kept them from falling to their deaths, their will to eat Darrow led to Kong killing one in the vines. After falling the short distance to the ravine floor, the last remaining Vastatosaurus took its turn with the Eighth Wonder of the World. After several close calls in their battle, Kong was able to knock the final V-rex off balance and break its jaw before killing it.

All of the remaining Vastatosaurus rex were wiped out, along with the rest of Skull Island’s inhabitants after a 1948 earthquake, measuring 9.2 on the Richtor scale caused the island to sink entirely into the ocean.

Jaw Strength: The Vastatosaurus’ primary weapon is its jaw due to its build not permitting much use of other structures.

Flexibility: Due to their dense jungle habitat, V-rexes adapted wide feet and hip bones to aid in hunting prey at high speeds through heavily wooded areas. These adaptations would allow them to maneuver around trees at high speeds.

In early concept art for the film, Vastatosaurus are portrayed as brown T-rexes. There was also talk of having the V-rex stand upright, like Tyrannosaurus were originally thought to do.

Weta Workshop artists Greg Broadmore and Christian Pearce were responsible for designing the V. rex, with Broadmore commenting in "The Making of King Kong: The Official Guide to the Motion Picture" that he had probably done twenty to thirty designs before settling on the final appearance.

Vastatosaurus rex is a tribute to the Tyrannosaurus rex from the original 1933 "King Kong" film in that they share some of the T-Rex's erroneous design features, such as the pebbly skin and three fingers.

V-rexes are suggested to partake in inbreeding. This is emphasized in reference to the family seen in the film, as designer Greg Broadmore described them as “"this group of ornery yokels, this inbred family of dinosaurs.”

The crocodilian approach to the V-rex’s scales made the sculpting of the animation maquettes a very time consuming process. It took six months to complete them.

And that’s Wikizilla’s Kaiju Profile on the Vastatosaurus rex. Thank you all for watching, and We’ll see you next time!