Anime GODZILLA Timeline is the 5th episode of Wikizilla's Kaiju Facts video series. It was uploaded on January 27, 2018.

This video lays out the timeline of the GODZILLA anime trilogy universe, most of which comes from GODZILLA: Monster Apocalypse, and GODZILLA: Planet of the Monsters.

A follow-up video which talks about GODZILLA: Project Mechagodzilla was released on September 10, 2018. 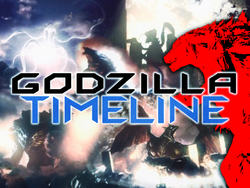 In this video we'll be laying out the timeline of the anime GODZILLA universe in detail. All of this is taken directly from the prequel novel "Godzilla: Monster Apocalypse," the theater program, and the “INVESTIGATION REPORT” provided on godzilla-anime.com. Without further ado, let's commence:

May 4, 1999 - Kamacuras, the first confirmed giant monster, appeared in Manhattan on May 4, 1999, and proceeded to destroy the World Trade Center and devastate much of the city. At the same time, Kamacuras larvae appeared in the subway system under New York and preyed on people. Because Kamacuras appeared in a densely populated area, the military response was delayed, resulting in an estimated 2.5 million casualties. Kamacuras was finally destroyed near Portsmouth, New Hampshire, 72 hours after making landfall using bunker buster bombs.

September 2002 - Dogora was the second kaiju to appear. It first made contact with the Russian space station Mir in the atmosphere, then appeared over the English capital of London in September 2002. Dogora absorbed thermal energy from the attacks of the British military and moved on to Manchester. Dogora was eventually defeated when chemical plants throughout the United Kingdom and European Union mass-produced chemicals containing active ingredients from spider venom and sprayed them into the air. By the time Dogora was defeated after two days, major landmarks such as the Tower of London and Big Ben were destroyed and an estimated 3.9 million people were wounded or killed.

2002 - Kamoebas appeared in the Philippines just two days after Dogora’s defeat. Another one, designated "Kamoebas II," later appeared in Guam.

November 2005 - Anguirus appeared from the frozen soil of Siberia, while Rodan emerged from Paektu Mountain in November of 2005. Both monsters converged in Beijing and attacked the city, which the Chinese military responded to by commencing Operation Hedorah. Discovered inside a waste mine in Hebei in 1999 as a colony of sludge-like microorganisms that consumed chemical substances in water, the creature was subsequently studied and converted into a bioweapon. Reconfigured into a giant black mist-like figure with red and yellow eyes, Hedorah successfully killed the two monsters, but went out of control and proceeded to destroy Beijing and Tianjin overnight, then disappeared after consuming all of the pollutants in the area. The ordeal resulted in damage throughout the Hebei province and an estimated 8.2 million casualties.

2012 - In February of 2012, the 10-meter-tall monster Gabara was discovered by Albert Ichiro Santos in the Amazon rainforest. The ugly monster slaughtered and tortured wildlife such as crocodiles. It was reported to have been injured in a thermite explosion and then fell into a river, where it was eaten by crocs and piranhas.

Also in 2012, Megalon emerged on the west coast of Africa and made his way across the continent, destroying several small nations along the way.

Late 2010’s - Some northern Africans subsequently escaped to Europe, though in the second half of the 2010's, the Kraken-like monster Gezora appeared in the Mediterranean and hindered refugee movement into Europe.

2015 - Near this time, countries around the world began fighting back against monsters, with at least the USS Saratoga killing Ebirah III in 2015.

November-December 2017 - Dagahra first appeared in late November of 2017, and made contact with the American nuclear submarine Seawolf in the South Pacific Ocean. Two weeks later, the U.S. Navy, including the USS Saratoga, engaged Dagahra in American Samoa and successfully injured him, but could not pursue him due to the presence of Barem in the water. Three days later Barem arrived at the port of Pago Pago, and eventually caused one-third of its inhabitants to die of bacterial infection. Two weeks after that, on Christmas Day, Dagahra approached Australia, but the Australian Navy did not attack out of fear of releasing Barem into Australian waters. Dagahra made landfall in Sydney and devastated the city before moving on to Newcastle. The government was thrown into chaos and in the confusion gave the ill-advised order to attack Dagahra. Dagahra was fatally wounded and flew out to sea, where it died and contaminated the surrounding waters with huge numbers of Barem. This led to a pandemic and famine later known as the "Red Christmas Scourge," which by 2018 claimed the lives of 3 million people. Australia's waters became heavily polluted by the Barem, and it received no foreign aid and eventually collapsed. An estimated 6.7 million people were killed or wounded in Dagahra's attack.

June 2021 - A flock of Griffon attacked Egypt in June of 2021, resulting in the fall of the capital city of Cairo. Failure to eradicate the early Griffons resulted in large numbers of them later on.

2022 - Next year, Megalon returned and destroyed the Republic of South Africa. The population of the African continent was cut in half, with between 300 to 400 million people fleeing and seeking refuge in Europe or the Middle East.

May 11, 2022 - On May 11, Orga landed at Izmir, Turkey, the site of the largest refugee camp for those who fled from Africa to Turkey. The military response was delayed, and the creature reached Ankara before it was finally destroyed. Officially only 1.15 million casualties were reported from the attack, however the death toll likely exceeded 10 million if refugee deaths were taken into account.

2022 - That same year, Manda appeared in the Atlantic Ocean, which remained under his control for over a decade.

2024 - Two years later, Maguma attacked North Korea. As the creature moved towards Seoul, South Korea, the United States launched a tactical nuclear missile at Maguma, killing it and marking the first use of a nuclear weapon against a kaiju.

2020's - Throughout the 2020's, the Giant Octopus was regularly sinking ships in the Pacific Ocean, while the Atlantic Ocean continued to be menaced by Manda and Gezora, and the Bering Sea by Ganimes.

2030 - Starting in the second half of 2030, far more ships began to disappear than the normal amount that the Giant Octopus would claim, including a nuclear submarine. Additionally, Kamoebas IV washed ashore dead on Odo Island. Dr. Kyohei Yamane proposed that it was killed by an even larger predator, which he gave the name “Godzilla” after a mythological dragon from the island’s folklore. Later in the year, Godzilla made landfall in Los Angeles, where he simultaneously killed Anguirus IV, Varan II, and Baragon II. Godzilla completely destroyed LA and San Francisco and caused an estimated 8.7 million casualties, before returning to sea.

December 2031 - Godzilla relanded in the west coast of the U.S. in December of 2031, destroying Seattle and easily breaking through the military defense line at Colorado Springs. In desperation, the U.S. government hurled 150 nuclear warheads at Godzilla totaling at nearly 40 megatons of power. Godzilla walked away from it unscathed, and disappeared into the Gulf of Mexico. The presence of Kumonga and multiple Kamacuras in the U.S. was reported in the wake of Godzilla’s raid. By this point, the world population has dwindled down to an estimated 2.3 billion, from about 7 billion in the race's heyday.

2034 - In 2034, Godzilla destroyed most of western Europe, causing 6 million casualties as he moved across the continent. Godzilla disappeared for 8 years after heading into the Arctic Ocean.

2035 - Next year, the Exif aliens made first contact with humanity, appearing in New York.

2036 - The year after, Bilusaludo aliens arrived on Earth, appearing above London. In the same year, Megaguirus and flocks of Rodan were reported to have regularly preyed on refugees in Siberia trying to leave in the railways.

2039 - In 2039, the "United Earth," composed of humanity, the Exif, and the Bilusaludo, was formed. New anti-kaiju mechs and superweapons such as Powered Suits, Anti-Nuclear Energy Bacteria and Jaguar J were constructed with Bilusaludo aid and began being used against giant monsters. G-Force launched “Operation: Eternal Light” in order to reclaim the Atlantic from the kaiju. The underwater battleship known as the Goten, under the command of Captain Jinguji and Unberto Mori, engaged Manda in the Strait of Dover and successfully killed him. G-Force engaged Biollante in Normandy, with the underground combat vehicle Moguera eventually destroying Biollante by burrowing into the nucleus in her root cavity.

October-December 2039 - In October of 2039, the French military claimed to have killed Godzilla after bringing down a bipedal kaiju with back fins and a long tail. The kaiju was quickly identified as a different species dubbed “Zilla,” and it turned out that the creature asexually reproduced countless offspring, which overran the city of Rouen. After great difficulty, G-Force eventually succeeded in wiping out the Zillas, which while frail and susceptible to conventional weapons, had fertility as a strength. Meanwhile in Paris, Gorosaurus appeared following Godzilla’s attack on the city. He was killed in December by the combined efforts of G-Force and the Bilusaludo.

2042 - Godzilla reemerged in 2042. In the same year, the provisional world government was moved near Rio de Janeiro, Brazil, and construction began on the two interstellar emigration vessels, Oratio and Aratrum.

2044 - Godzilla is estimated to have caused upwards of 300 million casualties worldwide by 2044, as he appeared 8 separate times in two years. He left the entire east coast of the United States, northern Africa and half of the Eurasian continent uninhabited. By now, only about 1.02 billion people were left.

2045 - In 2045, the United Earth launched “Operation: Great Wall,” a desperate attempt to stop Godzilla. 2000 nuclear warheads are detonated near the Himalayas, opening a large fault that trapped Godzilla underground.

2046 - However, by January 2046, Godzilla used his atomic breath to free himself. Soon, he broke through the Indian defense line, resulting in 200 million casualties, and then disappeared into the Bay of Bengal. Meanwhile, humanity and the Bilusaludo began construction of Mechagodzilla, the ultimate anti-Godzilla weapon, in Hamamatsu, Japan. However, Godzilla arrived in Hamamatsu in March, and engaged in a decisive final battle with the United Earth. Godzilla is triumphant, and Mechagodzilla is abandoned before it could be activated. About 100 million casualties resulted in Japan.

2048 - In 2048, 15,000 of the 700 million humans still living on Earth were selected by the United Earth’s artificial intelligence Omni Electio to flee the planet aboard two interstellar emigration crafts, the Oratio and Aratrum. The Oratio set off to carry 10,000 passengers to Kepler-452, while the Aratrum carried 5,000 passengers to Tau Ceti-e.

~2070 - After 22 years of space travel, the Aratrum arrives at Tau Ceti-e, but finds its atmosphere to be completely uninhabitable for humans. Captain Haruo Sakaki and a faction dubbed the “Earth Returnists” seize political control aboard the ship and decide to use the ship’s experimental hyperdrives to instantaneously return to Earth and attempt to defeat Godzilla using Haruo’s “Godzilla Extermination Strategy.”

~22,000 - The Aratrum emerges from hyperspace, but due to time dilation nearly 20,000 years have passed on Earth. Haruo and his team land on the planet’s surface, but find that a new ecosystem has developed around Godzilla...

...that's where Part One leaves us off, and that's the timeline of the GODZILLA anime universe. Thanks for watching!