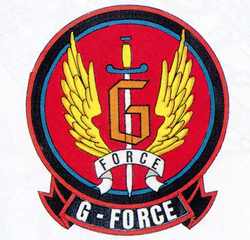 G-Force (Ｇフォース,   Jī Fōsu) is an international joint military organization formed by the United Nations and the JSDF It is the military-branch of the United Nations Godzilla Countermeasures Center (U.N.G.C.C.). G-Force first appeared in Godzilla vs. Mechagodzilla II.

The United Nations created a specialized branch composed of mostly American and Japanese representatives called the United Nations Godzilla Countermeasures Center (U.N.G.C.C.). In collaboration with the JSDF, the U.N.G.C.C. formed a military organization called G-Force led by Commander Takaaki Aso. G-Force constructed the mech Garuda, piloted by Kazuma Aoki. After salvaging the remains of Mecha-King Ghidorah, G-Force elected to abandon the Garuda and construct Mechagodzilla. Mechagodzilla successfully defeated Rodan with the help of the Garuda and nearly killed Godzilla himself. Ultimately, Rodan gave up his life force to revive and empower Godzilla, who promptly destroyed Mechagodzilla.

Using the remains of Mechagodzilla, G-Force constructed MOGUERA, a powerful mech resembling a giant mole with the ability to split apart into Star Falcon and Land Moguera. MOGUERA was originally intended to kill Godzilla, but was forced to work alongside him to defeat SpaceGodzilla. Though Godzilla successfully defeated SpaceGodzilla, MOGUERA was completely destroyed in the battle.

Following the realization that Godzilla would explode and destroy the world, G-Force constructed the Super X3, based off of the JSDF’s successful series of Super X attack crafts. The Super X3 froze Godzilla, hoping to prevent his explosion. Unfortunately, Godzilla's heart was discovered to be about to melt down, which would be even more catastrophic. Later when Destoroyah attempted to flee Godzilla, the Super X3 froze the beast's wings and caused it to plummet to its death. The Super X3 attempted to freeze Godzilla as he melted down, but ultimately failed to do so. Thankfully, Godzilla Junior absorbed the excess radiation and matured into an adult Godzilla.

G-Force appears in the 2004 video game Godzilla: Save the Earth for the Xbox and PlayStation 2. G-Force is only seen in the opening cutscene of the game, as they deploy Kiryu to battle Godzilla, and in the cutscene before the start of the campaign, where G-Force analysts can be seen in a base while Vorticia gives her address to the people of Earth.

G-Force plays a role in the 2014 video game Bandai Namco's Godzilla for the PlayStation 3 and 4. In the game, G-Force was formed in the years following Godzilla's first attack on Tokyo in 1954 to defend Japan should the monster ever return. G-Force in the game is virtually identical to its film counterpart, except it also controls the Gotengo, the Super X and Super X2, and Kiryu along with its other vehicles and mechs. G-Force will frequently attack Godzilla during the campaign, and as the disaster level increases G-Force will send more and more powerful military units, including Maser Cannons and the Super Xs. In the game's story, G-Force is responsible for defending Japan's G-Energy Generators from Godzilla and other kaiju as the nation has become dependent on a substance derived from Godzilla's cells called G-Energy, which was discovered in the aftermath of the original Godzilla's attack in 1954. G-Force also uses attack subs powered by G-Energy which act as generators in sea stages. Some generators are equipped with an emergency shut off device that shuts them down after a certain amount of time has pasted, resulting in a game over if they are not all destroyed before they shutdown. In addition to its mechs and vehicles, it also uses stationary anti-Godzilla weapons such as Artificial Lightning Generators and Stationary Gun Turrets equipped with missiles and Masers. During certain points in the game, the player can activate Data Collection points which activates an alternate camera view which represents G-Force personnel gathering video data of Godzilla in action as part of an effort to gather enough data to complete Kiryu's combat software. In the final mission, Godzilla manages to destroy all of Japan's G-Energy Generators and becomes Burning Godzilla after absorbing too much G-Energy. While Godzilla manages to fight off the Super X3 and the Hollywood Godzilla, he is eventually defeated when G-Force unleashes a barrage of freeze weapons fired from various G-Force units, the Super X3, and the Gotengo which manage to cool down Godzilla's body to the point it freezes him solid, preventing a meltdown that could destroy the planet. After this, either Kiryu or Super Mechagodzilla transports the frozen Godzilla to the ocean, leaving Japan safe from his wrath for the time being.

21 months ago
Score 0
Were Kenichi and Ijuin really members of G-Force? They seemed more like scientific consultants.
Permalink
↑ back to top ・ contents
Retrieved from "https://wikizilla.org/w/index.php?title=G-Force&oldid=181097"
Categories: