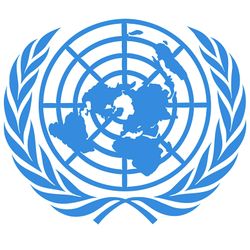 The United Nations (U.N.) is an international organization whose stated aims are to facilitate cooperation in international law, international security, economic development, social progress and human rights issues. The UN was founded in 1945 to replace the League of Nations, to stop wars between nations and provide a platform for dialogue. The U.N. is featured in several films in the Godzilla series, notably the latter half of the Heisei era.

A group of Japanese scientists working for the United Nations established a base on Sollgel Island to research ways to change the climate so as to make barren regions fertile so that crops can be grown there and hopefully one day solve world hunger. This project was greatly hindered by the presence of several kaiju on the island. Kamacuras and Kumonga stalked the team of scientists, and it wasn't until Godzilla and Minilla defeated the creatures that the scientists were able to escape Sollgel Island alive. Presumably, the United Nations later quarantined the island and began to capture and contain several other monsters there, earning it the name Monster Island.

In the year 1999, the United Nations had captured all of Earth's monsters on an island in the Ogasawara chain known as Monsterland. The island's containment fields were breached by the Kilaaks, who broke the monsters free and sent them to destroy Earth's cities under their mind control. United Nations scientists managed to break the Kilaaks' mind control and sent the monsters to Mt. Fuji to attack the Kilaaks' base there. The Earth monsters were intercepted by King Ghidorah and battled him. After killing King Ghidorah and destroying the Kilaaks' base, the monsters were returned to Monsterland to live out the rest of their days in peace.

The Futurians, actually members of a radical terrorist organization called the Equal Environment of Earth Union, claimed to represent the Earth Union, presumably the future successor of the United Nations.

The United Nations created a specialized branch composed of mostly American and Japanese representatives called the United Nations Godzilla Countermeasures Center (U.N.G.C.C.). In collaboration with the JSDF, the U.N.G.C.C. formed a military organization called G-Force led by Commander Takaki Aso. G-Force constructed the mech Garuda, piloted by Kazuma Aoki. After salvaging the remains of Mecha-King Ghidorah, G-Force elected to abandon the Garuda and construct Mechagodzilla. Mechagodzilla successfully defeated Rodan with the help of the Garuda and nearly killed Godzilla himself. Ultimately, Rodan gave up his life force to revive and empower Godzilla, who promptly destroyed Mechagodzilla.

Using the remains of Mechagodzilla, G-Force constructed MOGUERA, a powerful mech resembling a giant mole with the ability to split apart into Star Falcon and Land Moguera. MOGUERA was originally intended to kill Godzilla, but was forced to work alongside him to defeat SpaceGodzilla. Though Godzilla successfully defeated SpaceGodzilla, MOGUERA was completely destroyed in the battle.

Following the realization that Godzilla would explode and destroy the world, G-Force constructed the Super X3, based off of the JSDF's successful series of Super X attack crafts. The Super X3 froze Godzilla, hoping to prevent his explosion. Unfortunately, Godzilla's heart was discovered to be about to melt down, which would be even more catastrophic. Later when Destoroyah attempted to flee Godzilla, the Super X3 froze the beast's wings and caused it to plummet to its death. The Super X3 attempted to freeze Godzilla as he melted down, but ultimately failed to do so. Thankfully, Godzilla Junior absorbed the excess radiation and matured into an adult Godzilla.

The United Nations, in order to combat the worldwide monster threat, formed the Earth Defense Force. The EDF made use of powerful superhuman mutant soldiers as well as advanced attack vehicles like the Gotengo, Karyu, and Eclair. The United Nations's Secretary General was captured by the Xiliens and impersonated by an Xilien, who renamed the United Nations the Space Nations. Members of the EDF saw through this ruse and exposed the Xiliens' plans, prompting the Xiliens to release their army of monsters across the globe. A group of EDF members led by Captain Douglas Gordon and Shinichi Ozaki used the Gotengo to free Godzilla from Antarctica and later used it to assault the Xilien Mothership, where they rescued the Secretary General and the director of the EDF. After the Mothership was destroyed, the Gotengo transferred energy to Godzilla, allowing him to overcome and destroy Keizer Ghidorah.

↑ back to top ・ contents
Retrieved from "http://wikizilla.org/w/index.php?title=United_Nations&oldid=139801"
Categories: