Gorath (妖星ゴラス,   Yōsei Gorasu, lit. Calamity Star Gorath) is a 1962 Japanese tokusatsu science fiction film produced by Toho. The story for Gorath was written by Jojiro Okami, a former Japanese Air Force pilot who also gave the original ideas to the films The Mysterians, Battle in Outer Space, and Dogora. It was released to Japanese theaters on March 21, 1962.

As Tomoko Sonoda and Takiko Nomura prepare to go swimming in a lake, they are startled by the nearby launch of the rocketship JX-1 Hayabusa. The car radio informs them that Tomoko's father Raizo is the captain. Their mission is to observe a rogue star called Gorath. With a mass 6,000 times that of the Earth, it is on course to pass dangerously close to the planet. When they find it, however, its incredible gravitational pull starts to drag them in. Realizing the ship is doomed, Raizo tearfully orders the crew to collect as much data as possible and transmit it back to Earth in the time they have left.

Tomoko and Nomura encounter cadet astronaut Tatsuma Kanai fooling around in a robot costume at a Christmas celebration. As he slips past his fellow officers, Nomura praises his determination in the astronaut program. When Tomoko returns home, she is swarmed by reporters and finds a memorial to her father with dozens in attendance. Her grandfather, paleontologist Kensuke Sonoda, consoles her as she weeps for him. The Japanese government struggles to make sense of his data, as Gorath is only three-fourths of Earth's size. An investigation led by Drs. Kono and Tazawa deliver their findings, verified by their colleagues in the United States: Gorath is on a collision course with Earth. Kono requests that they take part in a United Nations effort to save their planet. Gorath's existence is quickly revealed to the public.

With the JX-2 Ootori under construction, Kanai continues his training. He and his fellow astronauts rush to meet Captain Endo when he arrives at the facility, only for him to silently turn away, signaling that their mission to Gorath has not yet been scheduled. Kanai and several others keep their spirits up by taking a joyride in a helicopter and singing of space exploration. They visit Secretary of Space Murata and petition him to authorize the launch of the JX-2. He informs them that the issue is a budgetary one, as the JX-1 was incredibly expensive, but he's recently secured the needed funds. Riding through Tokyo in a taxi, Kono and Tazawa are struck by how unconcerned their driver and the rest of the populace seem.

In a speech at United Nations Headquarters in New York City, Kono presents humanity's two options: destroy Gorath or move the Earth out of its path. Regarding the latter plan, Tazawa has calculated that the Earth must be over 400,000 kilometers from Gorath when it passes by. Heavy-water nuclear reactors will provide the necessary energy. Every country with a nuclear program pledges to declassify its research to aid in the operation. Back in Tokyo, Tazawa gives a presentation at the Diet Building showing the destruction Earth would face if Gorath passed within 200,000 kilometers: earthquakes, volcano eruptions, and the oceans and atmosphere sucked into space. The Japanese government receives a request from the U.N. to dispatch the JX-2 and immediately accepts. Vice Captain Saiki arrives at a dance to deliver the news to the astronauts. Only Kanai, visiting Nomura, is absent. Unsure he'll return from the mission, he presents her with an ornate necklace, but she rejects her. Her fiancé was one of the astronauts aboard the JX-1, and she refuses to accept that he's dead. Enraged, Kanai throws his picture out the window and storms out of the apartment.

JX-2 passes the French, Portuguese, and Czech international space stations that discovered Gorath. Endo remarks that such cooperation between nations would have been impossible before the United Nations. Work begins on a field of rockets in Antarctica to move the Earth. Tragedy strikes when one of the Atomic Burrowers causes a catastrophic cave-in, costing some sixty days of work. Approaching Gorath, the JX-2 finds that its gravitational pull has increased since it destroyed the JX-1, a consequence of it absorbing space debris on its journey. Kanai, piloting Capsule 1, launches to collect data on the star, with Endo cautioning him not to risk his life. Unable to get a reading on Gorath's mass, he soon disregards the order. Space debris strikes one of Capsule 1's thrusters, and as Gorath's surface flashes with colorful explosions, he manages to escape the star's pull just in time. However, the traumatic experience has caused him to lose his memory. The JX-2 docks at one of the international space stations so the data he gathered can be analyzed.

Back on Earth, the rockets in Antarctica fire successfully. Tomoko calls Tazawa via video phone to congratulate him, with his colleagues and her brother egging them on. He is uneasy, however, believing more rockets need to be added to account for Gorath's ever-growing mass. Kono opposes the idea but promises to consider it. After Tazawa leaves with Tomoko, Kono confides to Kensuke that the U.N. has concluded that nothing short of a miracle will save the Earth even if Tazawa gets his additional rockets; Gorath's pull is simply too powerful. Tomoko consoles Tazawa, saying that he at least gave humanity hope, and they embrace.

In Antarctica, an enormous walrus-like reptile suddenly attacks the U.N. base, though the outside world initially believes an earthquake caused the destruction. Kensuke identifies it as an animal after studying a blood sample. He theorizes that it was awakened by the rockets warming its habitat. A VTOL jet spots it and fires a laser at a nearby mountain, burying it in rubble. Kensuke and Kono land and try to observe it up close, but it quickly breaks free, prompting them to withdraw. Left with no other choice, the VTOL attacks Maguma directly, its laser quickly killing it.

Just before landing on Earth, the crew of the JX-2 watches as Gorath absorbs the rings of Saturn. One of the space stations accompanies them. Tomoko and Nomura prepare to evacuate Tokyo, though Nomura believes there's nowhere to run. Two of Kanai's colleagues bring him to them in the hopes of restoring his memory, but he fails to recognize them. Still, they agree to take him with them. Gorath becomes visible in the sky as the exodus continues, then consumes the Moon. Tidal waves flood Tokyo. An earthquake swallows up the satellite and JX-2, along with a village near the Sonoda house. Tidal waves strike the U.N. base in Antarctica as well, but the rockets persist. Watching Gorath on television, a terrified Kanai's memory is restored. All are silent as Gorath passes the Earth. Drenched in sweat, Tazawa announces they have succeeded, and the base erupts in celebration. The rockets shut down, as Tazawa and a colleague contemplate the task ahead: returning the Earth to its original orbit. The Sonodas, Kanai, and Nomura watch as flood waters slowly recede from Tokyo. The United Nations delivers a message to the world: "Everyone, we have just begun. Together, we overcame the doom of the suspicious star, Gorath. If we could come together and cooperate to overcome the danger that threatened us, can't we take this opportunity to work together for all eternity?" 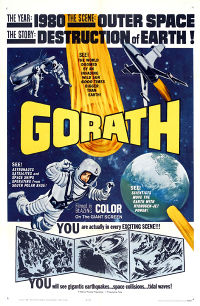 Gorath was given a limited West Coast theatrical release in the United States by Brenco Pictures. The English-language version features extensive re-editing and shortening of many scenes. Among the greatest changes was the re-writing and editing of a six-minute sequence featuring the monster Maguma, of which most footage was deleted. Although Maguma's carcass remains visible in one shot, dialogue was re-written to avoid references to the creature and substituted with references to explosive or volcanic action. The distributors found the character's appearance comical, mockingly dubbing him "Wally the Walrus," a reference to the cartoon character Wally Walrus. Test audiences felt similarly, even with the monster given Rodan's fiercer roar and shrouded in optically printed fog.[2] The U.S. release originally opened with a seven minute prologue featuring an astronomical lecture, though this sequence appears to have been excised from the film soon after its preview screening at the Egyptian Theatre in Hollywood, California.[3]

The English dubbing was recorded by Ryder Sound Services, and scripted by Star Trek writer John Lucas. Only four voice actors were used to dub the film. Besides the voices, the audio track was tampered with, including adding a sound effect for Gorath which was not present in the original Japanese version, and the use of Ikuma Dan's score for The Last War (another Toho film held by Brenco) as additional music.

Brenco Pictures re-released the film on a double-bill with The Human Vapor in 1968, but between the two releases never turned a profit on their investment in Gorath. The company closed in 1969 soon after the death of co-owner Edward L. Alperson on July 3 of that year. The film was purchased by Heritage Enterprises and aired on U.S. television. The further-edited television cut of Gorath was also the version of the film primarily used for VHS releases in the United States.

Gorath is currently unavailable on DVD or Blu-ray in the United States, though it occasionally airs on Comet TV.

Though Gorath is not available on Blu-ray, an HD version can be rented or purchased on the Japanese version of iTunes.

This is a list of references for Gorath (film). These citations are used to identify the reliable sources on which this article is based. These references appear inside articles in the form of superscript numbers, which look like this: [1]

3 months ago
Score -1
This movie would have been better if it had a nuclear war at the end.
Permalink
You are ignoring the author of this comment
Show comment | Manage ignore list

21 months ago
Score 0
This film is so unrealistic, seeing the ending Earth was saved from Gorath, but its Moon is not. Somehow, Earth is 100% fine without the Moon, despite its usage such as on tidal forces, rotation, etc...
Permalink
You are ignoring the author of this comment
Show comment | Manage ignore list

21 months ago
Score 0
I mean, the very notion of installing rocket thrusters into the South Pole to pilot the entire planet Earth out of Gorath's path is just as equally unrealistic, if not even more so.
Permalink
You are ignoring the author of this comment
Show comment | Manage ignore list

18 months ago
Score -1
But again, this is the Showa series, where most of the logic does not exist.
Permalink
↑ back to top ・ contents
Retrieved from "http://wikizilla.org/w/index.php?title=Gorath_(film)&oldid=173215"
Categories: