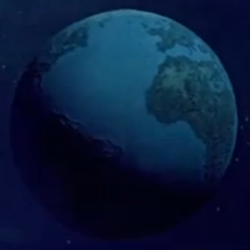 The Earth as seen from space in King Kong vs. Godzilla

The Earth is the third planet from the Sun, and the home to many diverse creatures such as humans, animals, plants, and kaiju. Most Godzilla films take place entirely on the Earth, with the exceptions of Invasion of Astro-Monster taking place partially on Planet X, Destroy All Monsters having scenes on the Moon, Godzilla vs. SpaceGodzilla including a scene in the asteroid belt, and the first two films of the GODZILLA anime trilogy taking place partially aboard the spaceship Aratrum. Other kaiju franchises, such as the Gamera and Guilala series, periodically move the action to other planets and moons as well.

Generally identified by convention rather than any strict criteria, up to seven regions are commonly regarded as continents.

The Earth has a very complex and active geography, having many trenches, islands, volcanoes, oceans, continents, mountains, and much more. Here are some notable geographic points in the Godzilla franchise:

Humanity has created over 150 countries due to many reasons. Some of the countries that are specifically featured in the Godzilla franchise are:

The Earth is often a target of alien attacks because of its rich biodiversity, its habitable atmosphere and different biomes, the presence of humans which could be used as food or as slaves, and powerful kaiju which aliens would want to take control of.

18 months ago
Score 1
stub page, requires major overhaul in the near future
Permalink
You are ignoring the author of this comment
Show comment | Manage ignore list

3 months ago
Score 0
Or crystals
Permalink
↑ back to top ・ contents
Retrieved from "http://wikizilla.org/w/index.php?title=Earth&oldid=151371"
Categories: