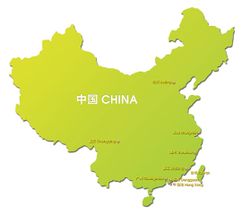 China (中国, Zhōngguó), officially the People's Republic of China (中华人民共和国, Zhōnghuá Rénmín Gònghéguó) or PRC, is a sovereign state in East Asia and the world's most populous country. It is featured in several kaiju films.

After flying out of Mount Aso in Kyushu, Japan, Rodan flew west through Beijing.

After the Kilaaks invaded Monsterland and took control of the kaiju, Mothra was sent to China and attacked Beijing.

When the world was suddenly beset by giant monsters, Anguirus appeared in Shanghai. The Earth Defense Force's warship Karyu was unable to hold him off, until the Xiliens suddenly teleported him and all of the other attacking kaiju away, claiming to have saved humanity. However, their true purpose was soon exposed by a group of EDF personnel, and the Controller of Planet X promptly unleashed all of the monsters once more, with Anguirus returning to Shanghai. He destroyed the Karyu with the aid of Xilien Fighters, and was later sent to Mount Fuji to battle Godzilla alongside Rodan and King Caesar.

In 2009, a study of temples in China led a Monarch team headed by Dr. Emma Russell to an ancient temple in China's Yunnan rainforest dubbed the "Temple of the Moth." Inside they discovered a huge cocoon with a quickening heartbeat coming from inside, which they determined to be the legendary Titan designated Titanus Mosura, or Mothra.

In 1999, a man named Yang Hongche discovered a colony of sludge-like microorganisms that consumed chemical substances in water inside a waste mine in Hebei, China. The Chinese military experimented on the microbes and converted them into a biological weapon named Hedorah. In 2005, when Rodan I and Anguirus I descended on Beijing, the Chinese military unleashed Hedorah to combat them. The microbes reconfigured into a huge black mist-like figure with red and yellow eyes and promptly killed both monsters, leaving nothing but their skeletons behind. However, Hedorah soon went out of control and laid waste to both Beijing and Tianjin overnight, consuming pollutants in the air as it rampaged. After depleting all of the surrounding pollutants, Hedorah vanished. Many attempts were later made by the United Earth to recreate Hedorah as an anti-kaiju weapon as the global situation worsened in the ensuing decades. Hongche, horrified at the destruction his discovery had wrought, sabotaged the United Earth's experiments to recreate Hedorah, and was promptly arrested, charged, and executed for crimes against humanity.

Beginning in 2042, the United Earth developed a plan to destroy Godzilla using a Bilusaludo-developed mechanical duplicate of the King of Monsters dubbed Mechagodzilla. For the operation to succeed, Godzilla needed to be stalled long enough for the Last Hope of Mankind to be completed. The United Earth developed a plan codenamed "Operation: Great Wall," to trap Godzilla in a fault near the Himalayas within China long enough for Mechagodzilla to be completed. In order to lure Godzilla to China, the United Earth began a second operation titled "Operation: Long March," which aimed to simultaneously stall Godzilla while gradually bringing him deeper inland on the Eurasian continent. While "Long March" was taking place, United Earth engineers in China preparing for "Great Wall" were menaced by numerous kaiju. Larval Meganulon in the soil preyed on the engineers, while the Rodans which typically fed on the Meganulon began including humans in their diet as well. In 2043, the engineers working on "Great Wall" accidentally awakened a Baragon living underground. A Gorosaurus was also sighted in China during this time, while a second Manda surfaced in the Persian Gulf to attack United Earth naval forces supporting "Great Wall."

Eventually, the United Earth's monster Gigan successfully lured Godzilla through the Middle East and into China. During a battle in Yarkant, Godzilla severely damaged Gigan's wings, arms, and head. United Earth soldiers, who were devoted to Gigan due to how many of their lives he had saved, threw themselves in harm's way to attempt to save him, forcing the Bilusaludo to teleport the mortally-wounded Gigan away. In 2045, the Bilusaludo redeployed Gigan in Hotan, and injected his body with experimental Nanometal, the autonomous metal being used to build Mechagodzilla. The Nanometal quickly assimilated Gigan's entire body, allowing him to reform and reshape his body and instantly regenerate from serious bodily damage such as severed body parts. Godzilla eventually destroyed Gigan with a particularly powerful blast of his atomic breath, and continued on his way. When Godzilla reached the target point, 2,000 nuclear warheads were detonated in order to activate Nanometal buried in the Earth's crust, causing a gigantic fault to open under the Himalayas and swallow Godzilla. Godzilla remained trapped underground for a year, feeding on the molten magma while submerged. Finally, he accumulated enough energy to free himself and triggered and eruption at an area designated "G-Crater," with the resulting lava flows destroying most of the United Earth's forces. Godzilla then broke free from underground with his atomic breath and made his way to India. 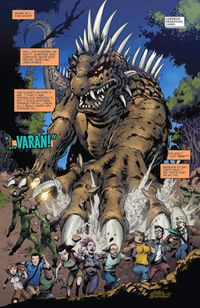 Varan appears in China in Godzilla: Rulers of Earth #5 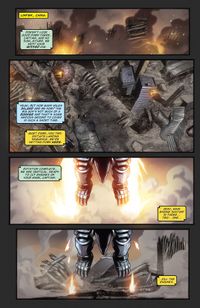 ↑ back to top ・ contents
Retrieved from "http://wikizilla.org/w/index.php?title=China&oldid=156118"
Categories: