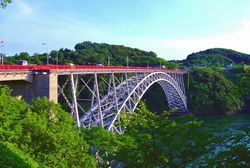 Saikai Bridge (西海橋,   Saikai-bashi) is a fixed-brace arch bridge, located between Saikai and Sasebo over the entrance of Omura Bay in Japan. It appears in the 1956 Toho film, Rodan.

Citizens evacuating via the Saikai Bridge in Rodan.

As Rodan approached Sasebo City, the JSDF ordered civilians to evacuate the city by crossing the Saikai Bridge. While being pursued by several F-86 Sabres, Rodan dove into the water near the bridge, then rose back out of it and continued flying, looping back towards the aircraft. Flying over the bridge, Rodan tore the bridge down with the powerful gusts of wind his wings were generating.


↑ back to top ・ contents
Retrieved from "http://wikizilla.org/w/index.php?title=Saikai_Bridge&oldid=128274"
Categories: