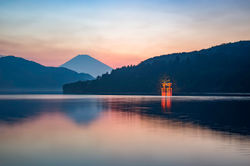 Lake Ashi (芦ノ湖,   Ashi-no-ko), also known as Ashinoko Lake or just Ashinoko, is a large lake near Mount Fuji in Japan that was featured in the 1989 Godzilla film, Godzilla vs. Biollante. 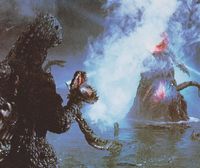 Godzilla and Biollante battle for the first time in Lake Ashi in Godzilla vs. Biollante

After moving from Saradia due to the killing of his daughter, Genshiro Shiragami lived in a house near Lake Ashi, and it is here where he continued to tend to the rosebushes containing her soul. After Mount Mihara erupted, most of the roses were killed, and in desperation, Shiragami spliced some of Godzilla's cells into the sole remaining plant. Agents from both Bio-Major and Saradia stormed the house, but were attacked and driven off by the resulting mutation, Biollante. The next morning, Shiragami found his lab in ruins, and later learned that Biollante had taken up root in Lake Ashi. The J.S.D.F formed a perimeter around the lake while Biollante began calling out, attracting Godzilla, who had just come ashore in Odawara. Godzilla and Biollante battled in the lake, with Biollante eventually being forced to break apart into spores and float away after being incinerated by Godzilla's atomic breath. Victorious, Godzilla returned to the ocean, pursued by the JSDF

14 days ago
Score 0
I want to live here for some reason.
Permalink
↑ back to top ・ contents
Retrieved from "http://wikizilla.org/w/index.php?title=Lake_Ashi&oldid=155653"
Categories: