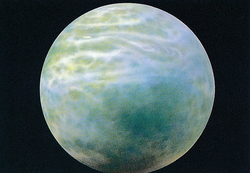 A view of the Monster Planet from space

The Monster Planet (怪獣プラネット,   Kaijū Puranetto), located at Space Point M-119 (スペースポイント-119,   Supēsu Pointo Emu Hyakuichikyū), is a fictional planet which appears in the 1994 theme park attraction, Monster Planet of Godzilla. A lush and mountainous planet, it is inhabited by alien counterparts of the monsters Godzilla, Mothra, and Rodan.

Monster Planet is the third planet of a distant Solar System, composed of five other planets which orbit a blue star. Upon discovery by the Space Exploration Station, the planetary exploration craft Planet was sent to investigate. After being downed by the planet's monster inhabitants, it sent distress signals to the Station which deployed its companion ship, Earth, on a rescue mission. Earth fended off the monsters, allowing the ships to warp home, but unintentionally took the beasts with them due to contaminates brought to the planet on Earth's surface which interfered with the process. Following retaliation from the JSDF, Earth managed to encapsulate the monsters in low-gravity bubbles, returning them to their rightful home.


↑ back to top ・ contents
Retrieved from "http://wikizilla.org/w/index.php?title=Monster_Planet&oldid=140625"
Categories: