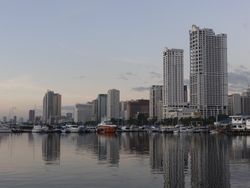 Manila is the capital city of the Philippines. It is referenced and featured in multiple kaiju films.

After flying over Beijing, Rodan (Who was later revealed as the first of a pair of Rodans) was sighted flying above the city of Manila as he journeyed across the world at high speed.

Manila in Godzilla vs. Mothra

While staying in a hotel in Manila, Takuya Fujito and his ex-wife Masako Tezuka noticed that the Cosmos were missing, as they had been stolen by Kenji Ando and taken to the Marutomo Company.

Hundun, the second kaiju to emerge from the Breach, attacked Manila on February 5, 2014.[1]

This is a list of references for Manila. These citations are used to identify the reliable sources on which this article is based. These references appear inside articles in the form of superscript numbers, which look like this: [1]

10 months ago
Score 0
Well there goes Manila. Manila has been in lockdown due to the coronavirus pandemic since 1 hour and 57 minutes ago, or March 15, 12am local time.
Permalink
You are ignoring the author of this comment
Show comment | Manage ignore list

25 months ago
Score 0
By the time Rodan was released (1957), Manila was not the Philippines' capital city. Quezon City held the title as the capital from 1948 until 1976.
Permalink
You are ignoring the author of this comment
Show comment | Manage ignore list

25 months ago
Score 0
I meant 1956
Permalink
↑ back to top ・ contents
Retrieved from "https://wikizilla.org/w/index.php?title=Manila&oldid=180996"
Categories: