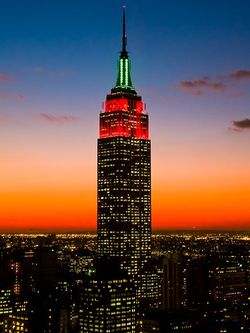 The Empire State Building is a famous skyscraper located in New York City, and the second-tallest building in the city. It is famous for its role in the iconic climax of King Kong, as well as the 2005 remake.

King Kong grabbed Ann Darrow and climbed the highest object he could find to escape from his captors, the Empire State Building. Four Curtiss F8C Helldiver biplanes appeared and began shooting at Kong. Kong set Ann down on top of the skyscraper and battled the planes, bringing down one of them. Unfortunately, Kong succumbed from his wounds caused by the planes' gunfire and lost his grip of the building, plummeting to his death. 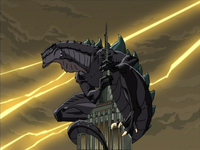 Godzilla sits atop the Empire State Building in the opening to Godzilla: The Series

The Empire State Building appears in the show's intro, when Godzilla climbs the building and roars as he reaches the top. Lightning then strikes behind him, serving as both a dramatic effect and to transition the intro to the next scene.

The Empire State Building also occasionally appears in the background of episodes or scenes located in New York City.

The Empire State Building can be seen behind Rodan in Godzilla: Final Wars

During Rodan's raid on New York City, the Empire State Building could be seen behind Rodan as he destroyed the city by flying past buildings at supersonic speeds. It is unknown if the building was destroyed along with the city or not.

King Kong grabbed Ann Darrow and took her to the top of the Empire State Building to observe the dawning day, repeating the sign for "beautiful" Ann had used in his lair, causing a shocked Ann to realize his intelligence. Before Ann was able to attempt further communication, six Curtiss Helldiver biplanes appeared and opened fire on Kong. Kong made his last stand against the planes, downing three of them, only to be hit by several bursts of gunfire from the surviving planes. He gazed at a distraught Ann one last time before falling off the building to his death.


↑ back to top ・ contents
Retrieved from "http://wikizilla.org/w/index.php?title=Empire_State_Building&oldid=127924"
Categories: