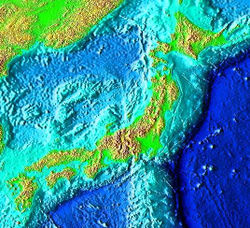 The Japan Trench can be seen to the right of Japan, and is noticeably deeper than elsewhere

The Japan Trench is an oceanic trench, and part of the Pacific Ring of Fire. It extends from the Kuril Islands to the Bonin Islands and is 9,000 meters (30,000 ft) at its deepest. It is an extension of the Kuril-Kamchatka Trench to the north and the Izu-Ogasawara Trench to its south. This trench is created when the oceanic Pacific plate subducts beneath the continental Eurasian plate. The subduction process, together with the friction created 'drags' the oceanic plate underneath the continental plate which Japan sits on, causing a deep-sea trench to be formed. The interactions of the Tectonic plates at the Japan Trench is one of the reasons why tsunamis and earthquakes in Japan are relatively frequent.

Dr. Tadokoro, Onodera Toshio and Assistant Professor Yukinaga used a submersible to descend into the trench, and find the source of the chaos which was affecting Japan.

After being ordered to finish the helpless Godzilla, Kiryu became once again possessed by the first Godzilla's spirit, and disobeyed the order. Instead of killing his brethren, Kiryu grabbed the restrained Godzilla and flew him over the Pacific Ocean, heading right to the Japan Trench. Kiryu noticed that operator Yoshito Chujo was still inside of him, and turned upside down so that Yoshito could fall through an open hatch to safety. Kiryu displayed the message "Sayonara Yoshito" on a monitor and plunged into the Japan Trench, sinking himself with Godzilla. In doing so, Kiryu both saved the life of one of his own kind and saved Japan from enduring Godzilla's wrath in the near future.


↑ back to top ・ contents
Retrieved from "http://wikizilla.org/w/index.php?title=Japan_Trench&oldid=155960"
Categories: