Mount Aso  (阿蘇山,   Aso-san) is the largest active volcano in Japan, and is among the largest in the world. It stands in Aso Kujū National Park in Kumamoto Prefecture, on the island of Kyushu. It appears in the 1956 Toho film, Rodan and the 1964 Godzilla film, Ghidorah, the Three-Headed Monster. 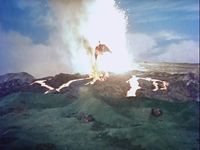 The Rodans are consumed by the eruption of Mt. Aso in Rodan

Mt. Aso is first mentioned as being the cause of the volcanic activity which caused the Meganulons in the mine to awaken. After destroying Fukuoka, the two Rodans nested inside of Mt. Aso. The JSDF formulated a plan to destroy both Rodans while they were sleeping by bombarding the volcano with rockets and causing it to erupt. The JSDF deployed several Honest John Missile Launcher trucks to the foot of Mt. Aso, and blasted the side of the mountain, revealing the two Rodans inside. Mt. Aso was then bombarded by dozens of missiles, causing molten lava to burst out of the crater. Both Rodans tried to fly out of the volcano, but one's wing was damaged in the attack and it fell into the lava, burning alive. Rather than fly away and survive without its mate, the other Rodan flew back into the lava stream to die along with its companion. Both Rodans were soon swallowed in the stream of lava, and presumed dead.

The revived Rodan flies out of the crater of Mt. Aso in Ghidorah, the Three-Headed Monster

Eight years after the two Rodans were seemingly destroyed, a mysterious prophetess claiming to come from Venus appeared in Japan and warned of terrible disasters that were to soon befall the nation. She claimed that volcanic gases accumulated in the crater of Mt. Aso would soon resurrect Rodan. The prophetess soon appeared at the crater of Mt. Aso, warning everyone assembled there that Rodan would emerge from the crater soon. The crowd laughed at the prophetess' predictions, but a gust of wind blew a man's hat into the crater. Another man offered to retrieve it, and climbed down into the crater. Just after the man grabbed the hat, the rocks moved and the crater shook, as Rodan's head burst from the ground and roared. Rodan broke himself free of the volcanic rock and flew out of the crater, directly for the rest of Japan.


↑ back to top ・ contents
Retrieved from "http://wikizilla.org/w/index.php?title=Mount_Aso&oldid=155763"
Categories: