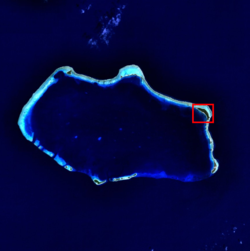 Bikini Atoll (also known as Pikinni Atoll) is an atoll in one of the Micronesian Islands in the Pacific Ocean, and part of the Republic of the Marshall Islands. It is referenced in multiple films in the Godzilla franchise, and is physically seen in the comic book Godzilla: Awakening and the 2014 film, Godzilla.

In the original film, it is hypothesized by Dr. Kyohei Yamane that an American hydrogen bomb test conducted at Bikini Atoll awakened and removed Godzilla from his underwater environment and caused him to absorb massive amounts of radiation.

In the Heisei Series, writer Kenichiro Terasawa hypothesizes that the Castle Bravo H-bomb conducted at Bikini Atoll in 1954 mutated a Godzillasaurus living on nearby Lagos Island and turned it into Godzilla. After learning of and testing this theory, the Futurians travel back in time to 1944 and remove the Godzillasaurus from Lagos Island, and move it to the Bering Sea, with the intention of erasing Godzilla from history.

However, it is later revealed that the Godzilla that attacked Japan in 1954 was a separate individual from the Godzillasaurus from Lagos, and was still mutated by the H-bomb test in 1954. The Godzilla that attacked Japan in 1984 and 1989 was actually the result of the Futurians moving the Godzillasaurus from Lagos to the Bering Sea, where it was mutated by a Russian nuclear submarine crash, thus preventing the timeline from actually being altered at all.

The United States military, after suffering attacks on their nuclear submarines by Godzilla, readied a nuclear warhead at Bikini Atoll in an attempt to kill the monster. When Godzilla began to swim ashore at Bikini, the bomb was detonated. Though it failed to kill or even visibly harm Godzilla, Godzilla was not seen for another 60 years.

Planning to eliminate both Godzilla and Shinomura, the United States military lured the monsters to Bikini Atoll with a nuclear warhead, then detonated it as they battled on land. The blast successfully killed Shinomura, but Godzilla survived and went into hibernation.

18 months ago
Score 0
SpongeBob also lives there.
Permalink
↑ back to top ・ contents
Retrieved from "http://wikizilla.org/w/index.php?title=Bikini_Atoll&oldid=126405"
Categories: