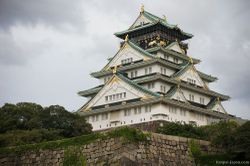 Osaka Castle (大阪城,   Ōsakajō) is a castle in Osaka, Japan. One of Japan's most important buildings due to its role in the unification of the country during the Azuchi-Momoyama period, It was built in the late 1500s, and was in use far into the 19th century. It was gradually rebuilt over the course of the 19th and early-20th century after centuries of neglect, with the keep being restored in 1928, and restorations finishing in 1997. It has appeared in a handful of kaiju productions, beginning with the 1955 Toho Godzilla film, Godzilla Raids Again.

Godzilla and Anguirus fight near the keep in Godzilla Raids Again

After battling through the city of Osaka, Godzilla and Anguirus fought around the partially-restored castle. Godzilla slammed Anguirus into the castle's keep and shoved him through it, demolishing the building with little effort. Anguirus, severely injured atop the ruins of the keep, tried desperately to fight back, but was killed after Godzilla bit into his neck with his jaws, then burnt the mortally wounded kaiju alive with a blast of his Atomic Breath. Anguirus' lifeless body toppled off the remains of the Castle, and into the Okawa River.

Barugon fires its rainbow beam next to Osaka Castle in Gamera vs. Barugon

During Barugon's rampage through Osaka, he came very close to the castle and when a few jets attacked, he froze the keep with his freeze breath. A short time later, Barugon unleashed his Rainbow Beam and destroyed most of the long-range missile launchers that were firing at him. Gamera arrived in Osaka and battled Barugon, but was frozen by Barugon's freeze breath. Gamera eventually thawed and flew after Barugon, with his flame jets thawing the castle in the process.

Osaka Castle in Godzilla vs. Biollante

↑ back to top ・ contents
Retrieved from "http://wikizilla.org/w/index.php?title=Osaka_Castle&oldid=156127"
Categories: