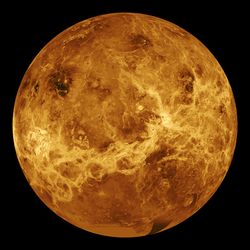 Venus is the second closest planet to the Sun, and the second inner planet of the Solar System. It is a planet which is known for its extremely hostile environment and intense heat. Venus is repeatedly mentioned in the 1964 Godzilla film, Ghidorah, the Three-Headed Monster.

At some point long before the events of the film, Venus was home to a vast and heavily-developed ecosystem, complete with an advanced intelligent race of its own, the Venusians. King Ghidorah appeared from space and attacked the planet, eventually wiping out all life. The remaining Venusians that escaped traveled to Earth, where they interbred with the native humans and over time lost their identity and unique mental abilities. Several years later, the spirit of one of the fallen Venusians possessed the Princess of Selgina, and convinced her that she was the last surviving individual from the spirit's civilization's cataclysm. Selina then began to prophetically warn the people on Earth of Ghidorah's imminent arrival.


↑ back to top ・ contents
Retrieved from "http://wikizilla.org/w/index.php?title=Venus&oldid=128399"
Categories: