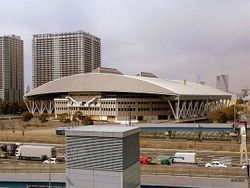 Ariake Coliseum (有明コロシアム,   Ariake Koroshiamu) is an indoor sporting arena located in Tokyo, Japan. It appears in the 1995 Godzilla film, Godzilla vs. Destoroyah.

Godzilla walks towards his fallen son at the ruins of Ariake Coliseum in Godzilla vs. Destoroyah

After Destoroyah emerged in his final form, he flew into Haneda Airport and blasted Godzilla with his Micro-Oxygen beam and slammed into him, knocking him down. Destoroyah then grabbed Godzilla Junior and flew to the Ariake District, where he dropped Junior from several hundred feet in the air onto the Ariake Coliseum, destroying it. Miki Saegusa and Meru Ozawa landed their chopper near the Coliseum and ran to the fallen Junior. Destoroyah flew overhead once again, blasting Junior and destroying the chopper with his Micro-Oxygen beam before flying back to the airport to battle Godzilla. As Junior closed his eyes and seemingly died in front of her, Miki began to sob, before regaining her composure and remarking that this would be Godzilla's last fight. Kenkichi Yamane managed to contact his sister Yukari and Dr. Ijuin, who had the news chopper they were in land near the ruins of the Coliseum and rescued Miki and Meru.


↑ back to top ・ contents
Retrieved from "http://wikizilla.org/w/index.php?title=Ariake_Coliseum&oldid=155680"
Categories: