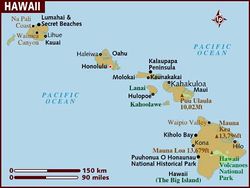 Hawaii is a volcanic island chain, much like Japan, and is one of the 50 states of the United States of America.

Honolulu in ruins in Godzilla

After destroying a Russian nuclear submarine in the Pacific, the winged male MUTO arrived in Honolulu, the capital of Hawaii, and landed at the airport. Meanwhile, Godzilla appeared in the waters just off Honolulu to pursue the MUTO Godzilla caused a massive tsunami as he came ashore that flooded the streets of Honolulu. A group of soldiers landed on rooftops and attempted to fire at Godzilla, but their bullets were not even noticed by the monster. While the MUTO battled the air force at the airport, Godzilla arrived and roared at the creature, challenging it. Godzilla and the MUTO briefly battled, destroying much of the airport and devastating the city of Honolulu. Eventually, the MUTO flew away over the ocean, with Godzilla swimming after it in pursuit. 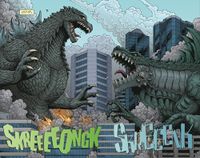 Godzilla and Zilla face off in Honolulu in Godzilla: Rulers of Earth #2

A conference for Megazoology, a new scientific field studying kaiju, was being held in Honolulu, Hawaii. Just offshore, the Counter-Kaiju Reaction Forces detected a large creature swimming to the island, possibly Godzilla. When the monster came ashore, it rampaged through the streets, shrugging off CKR's attacks. Due to radio interference, the creature was identified as "Zilla," and its presence attracted the actual Godzilla to the city. Godzilla and Zilla roared at and challenged each other, then proceeded to battle in the heart of the city. After a fierce and destructive battle, Zilla retreated to the ocean while CKR distracted Godzilla. Godzilla then left as well, leaving the city in ruins.


↑ back to top ・ contents
Retrieved from "http://wikizilla.org/w/index.php?title=Hawaii&oldid=127762"
Categories: