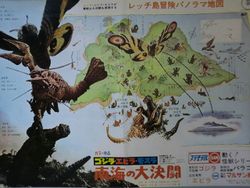 A map of Letchi Island

Letchi Island (レッチ島,   Retchitō), also known as Devil's Island (悪魔の島,   Akuma no Shima), is a fictional island that is the primary setting of the 1966 Godzilla film, Ebirah, Horror of the Deep.

Ebirah, Horror of the Deep

Letchi Island was the headquarters of the terrorist organization known as the Red Bamboo. The Red Bamboo built a facility on the island where they produced nuclear weapons. The island was guarded by the monster Ebirah, who attacked and destroyed any vessel that came within range of the island. In order to keep Ebirah from attacking their own ships, the Red Bamboo captured and enslaved natives from Infant Island, forcing them to produce a yellow juice from fruits on Letchi Island, which repelled Ebirah, so they could release it from their ships. After the yacht the Yahlen was wrecked by Ebirah, the survivors found themselves on the shore of Letchi Island, which they believed was deserted. While wandering the island, the survivors witnessed a Red Bamboo slave ship dock and lead a group of slaves away. They also witnessed Ebirah rise from the water and kill a group of prisoners that tried to escape. One of the slaves, Dayo, managed to escape and joined with the group of shipwreck survivors. The group broke into the Red Bamboo's weapons facility, where they were ambushed by Ryuii, a high-ranking Red Bamboo officer, and a group of armed soldiers. The soldiers chased the group to a cave on the cliff, and returned to the base when they were unable to find them. Inside of the cave, the group discovered Godzilla sleeping. Unwilling to stay in the cave, the group attempted to infiltrate the Red Bamboo base again, but were discovered and fired upon by a machine gun turret. One member of the group, Ryota, was tangled up in a string tied to a weather balloon, which took him to Infant Island, while another was taken prisoner. The three remaining members of the group returned to the cave, and decided to awaken Godzilla so he could destroy the Red Bamboo. Using a sword and a long coil of copper wire, the three created a makeshift lightning rod, which after being struck by lightning transferred a shock to the sleeping Godzilla. Godzilla was awakened, and burst out of the cave. Godzilla walked to the shore, when Ebirah burst out of the water and challenged him. Godzilla and Ebirah threw a rock back and forth at each other, before Godzilla waded out into the water and fought Ebirah hand-to-hand. Godzilla forced Ebirah to retreat, and then returned to the island, destroying the Red Bamboo weapons facility. After rigging their nuclear reactor on the island to explode, the Red Bamboo's commanders tried to escape on a boat, but the yellow juice had been replaced by a decoy fluid by the slaves, and Ebirah destroyed the ship, ending the Red Bamboo for good. Ryota and his brother Yata returned from Infant Island and met up with the other members of the group as well as the slaves, informing them that Mothra was coming to rescue them. They all began constructing a gigantic net for Mothra to carry them off on, while Godzilla engaged Ebirah in battle once again. After a fierce battle, Godzilla tore off both of Ebirah's claws and scorched him with his atomic breath, forcing the wounded monster to swim away in retreat. Victorious, Godzilla witnessed Mothra fly overhead and followed her onto the island. Godzilla tried to goad Mothra into fighting him, but Mothra merely knocked him aside and grabbed the net with all of the humans before flying to safety. Godzilla roared angrily as Mothra flew away, then stood still, with only seconds left before the reactor exploded. The humans called back to Godzilla, warning him to leave the island. Godzilla waited, before finally diving off the island and into the sea. After Godzilla had escaped, the reactor detonated, and Letchi Island was wiped completely off the map in a gigantic explosion.

↑ back to top ・ contents
Retrieved from "http://wikizilla.org/w/index.php?title=Letchi_Island&oldid=176941"
Categories: